The Flash – The Darkness and the Light Recap

Thank goodness the CW has a kind of happy counterpart to their popular DC Comics adaptation of Arrow. And that answers to the name The Flash, most recently proven “The Darkness and the Light.” Where the former is dark and gritty, the latter remains relatively lighthearted. After all, if we had never seen the creation of this show, we might not have seen the cutest first date ever. But we’ll revisit that later. First, in the latest episode, “The Darkness and the Light,” we begin with a peek into the past…

Eight months ago, Earth-2 Wells develops something revolutionary: an app that warns humans to the presence of meta-humans. It’s at the grand unveiling of his new device where he is confronted by Jay or The Flash from Earth-2. Jay wants Wells to out himself in front of everyone, including the media and his daughter and take responsibility for his actions. You see, it would seem Jay holds Wells responsible for Zoom’s creation.

RELATED: The Flash: The Fury of Firestorm Recap – Firestorm 2.0 Plus More Patty and Barry Adorableness

After saving his life, Barry brings Wells back to S.T.A.R. Labs, much to the discomfort of Cisco. Everyone on the team has something to distrust Wells for. Cisco is still smarting from the vision of Wells killing him; Caitlin and Iris hold him responsible for the death of the men they loved, and Barry is still processing his mentor killing his mother. This instantly puts Wells at a disadvantage while on Barry’s earth. And the team wants answers.

It seems Wells came through the portal with the express purpose of meeting The Flash. He wants to warn him, to help him. He wants Barry to succeed in capturing and ending Zoom where Jay did not. This is when Joe enters the scene and immediately fires off three bullets. Bullets that Barry stops, explaining to Joe the difference between Earth-2 Wells and the Wells they all knew. Joe isn’t happy, same as the rest of the gang and leaves to warn Iris. Once he finds Iris at work, he tells her of their latest Earth-2 visitor and he gives her a gun. Now that she no longer has Eddie to look out for her, she needs to protect herself, he says. 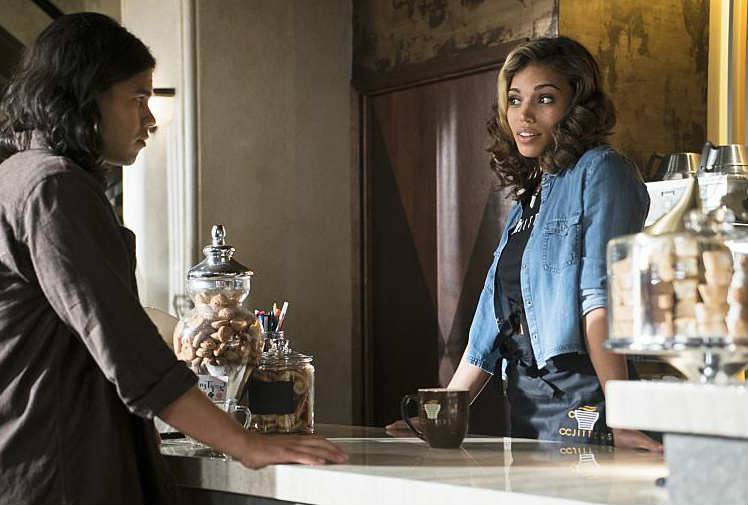 While getting their morning Joe, Barry and Cisco run into Patty. A cute exchange happens between Barry and Patty during which Patty tries to again make her interest known. Barry ignores all the signals (as usual) and cites forensic work as an excuse to stay away. Later, Cisco tries to impress the barista only to be turned down. (The barista, you’ll recognize, as Kendra a.k.a. Hawkgirl who is going to figure into Legends of Tomorrow as this show continues to introduce us to the Legend characters.) This isn’t the most significant thing to happen at the coffee shop, though. Cisco has another vision. This time, it involves a new meta-human in Central City who’s currently busy robbing a bank. He sends Barry there, but he’s unprepared to defeat Dr. Light. Back at the labs, Barry and Company learn more about Dr. Light from Wells. She’s Zoom’s second attempt to kill the Flash. Caitlin brings Jay back into the fold, hoping his perspective will help them in deciding how to handle Wells. Wells hears from Cisco why he is so averse to his doppelganger, to which he claims to be different than the Wells Cisco knew. Following this, another silent alarm goes off in a Central City bank. This time, Barry catches Dr. Light before she robs the bank and learns a surprising fact: Dr. Light is Earth-2 Linda Park. Before he can stop her, she blinds Barry and escapes his grasp for the second time.

Having now learned that Linda Park could be in danger and with Barry out of commission, Caitlin and Jay make plans to watch over her. With a lot of time to talk, Caitlin learns more about Jay. (She tells him she trusts him as he warns them not to trust Wells.) Just as they’re about to kiss, Dr. Light upends their van… After their coffee shop run-in, Barry did ask Patty out, a date conveniently set for the night of his run-in with Light. Turns out this isn’t ideal considering Barry is blind. But with Iris’ bright idea, Barry makes his date with Patty… with a little bit of help from Cisco. Fitted with dark glasses that double as a camera and an earpiece, Barry relies on Cisco to be his eyes. Despite some awkwardness and his temporary disability, the date goes well. Patty’s detective skills are put to good use when she outs him for being unable to see. The pair bond over their meal and because of Barry’s lack of sight, skip straight to handholding complete with a goodnight kiss. It’s at this moment that their phones both alert them there is a problem… 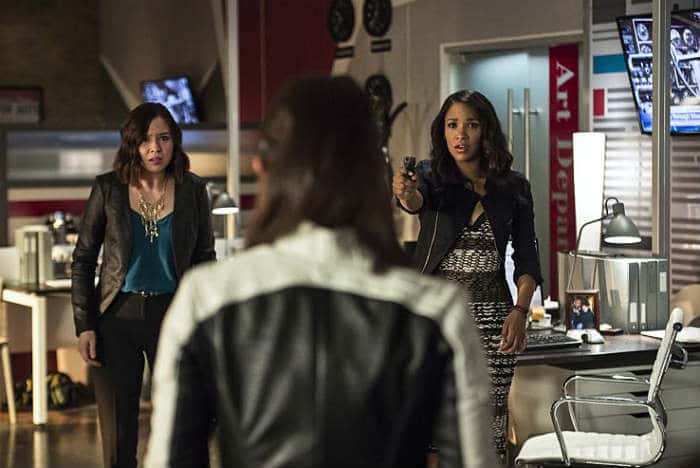 At the newspaper offices, Dr. Light is preparing to kill her doppelganger just as Zoom would want. Only Jay and Caitlin rush to the scene, temporarily distracting her. Iris uses her gun to knock her helmet off, but it’s not enough. Dr. Light kills Linda’s boss. Patty, Joe, and Barry process the crime scene.

Back at the lab, Wells continues to believe the best thing to do is use Light to draw out Zoom. This leads to fisticuffs between Jay and Wells. Knowing the capacity Zoom has, he doesn’t believe they should toy with Zoom by using Light as bait. This doesn’t stop Wells from using Light’s helmet and outing Cisco as a meta-human with his app. With his secret out, Cisco is able to use Light’s helmet to discover where she is. Barry manages to defeat her using advice from Jay and Wells. Following this, she’s placed in the pipeline with the other meta-humans. 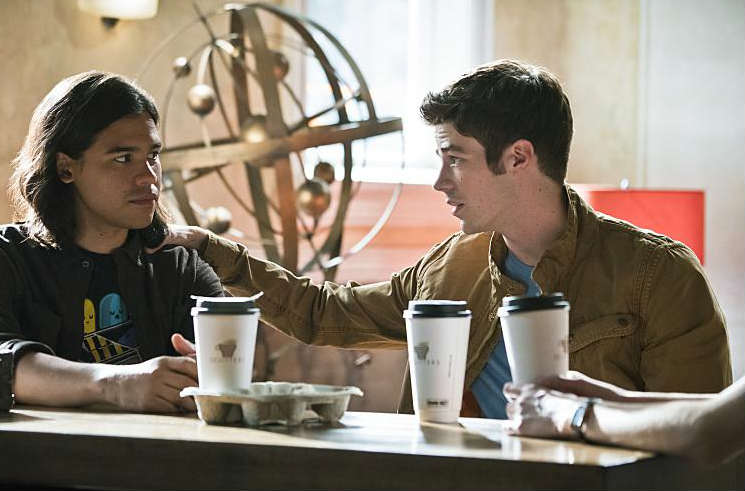 Before the episode ends, Barry makes a decision: he plans to use Light to lure Zoom into Central City. The only trouble with this is Jay vehemently disagrees. He doesn’t believe Barry has what it takes to defeat such a giant. Barry reminds him he’s not alone; he has Caitlin, Cisco, Wells, and Jay. But Jay refuses to be a part of this mission. He knows what Wells did to facilitate Zoom’s existence. Instead, he leaves.

I feel like Earth-2 Wells might not be the same kind of person as the Harrison Wells we do know. However, we must remember Jay says he has secrets and we did learn one of them in the final moments of last night’s episode. Zoom is holding Wells’ daughter captive. This means he is being driven by a personal agenda. Which might prove dangerous for Barry and his team.

Favorite Quotes from “The Darkness and the Light”

Barry: I was gonna ask her out, but then a land shark tried to eat me and then Dr. Wells the sequel showed up!

Have any thoughts on last night’s episode, The Darkness and the Light? I’d love to chat with you about this season. Sound off below with your comments.

Join me again next week when we look at ‘Enter Zoom.’ This could be Barry’s most dangerous foe yet!

Our romance-themed entertainment site is on a mission to help you find the best period dramas, romance movies, TV shows, and books. Other topics include Jane Austen, Classic Hollywood, TV Couples, Fairy Tales, Romantic Living, Romanticism, and more. We’re damsels not in distress fighting for the all-new optimistic Romantic Revolution. Join us and subscribe. For more information, see our About, Old-Fashioned Romance 101, Modern Romanticism 101, and Romantic Living 101.
Pin this article to read later! And make sure to follow us on Pinterest.
By Rissi JC on November 4th, 2015