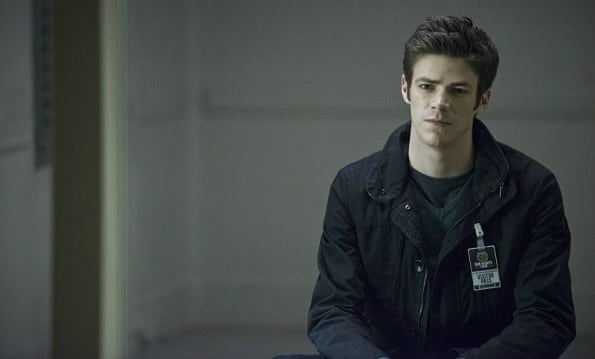 Given that the logistics of time travel were added to The Flash’s gamut, each week has had to build off that and in many ways become “bigger.” With last week’s fateful words still echoing in our minds, this episode opens 15 years earlier on the night of Nora Allen’s murder. We see Nora sweetly tucking in a young Barry before her home is invaded by two lightning streaks: one yellow, one red. We’ve seen this scenario time and time again through flashbacks, however this was the first time we see Barry clearly in the picture. We watch as he frantically tries to catch the Yellow Streak and put a stop to him threatening his mother.

A later flashback of the same night reveals the shocking twist that the Man in the Yellow Suit is not Wells! The man who murdered Nora Allen is a face we’ve not yet seen. This begs a question: Who is Wells? All I know is I still don’t trust the dude.

With wavering trust in Wells (which costs him later in the episode), Barry begins to gather research against him, bouncing all his theories off Joe. He asks, “Do you think he wanted me to become the Flash?” Right now, Joe seems more a voice of reason as he tells Barry all Wells has done (so far) is keep Barry safe. Still, there is suspicion in Joe, who believes Wells wants something from Barry. Joe advises that Barry listen to him, because after all when it comes to Wells’ endgame, Joe says, “[Wells] has been patient. Scary patient.”

Unfortunately, Barry doesn’t hide his hostility towards Harrison at all. And Wells begins to take notice, so much so he requests a word alone with Barry. Wells in his true suspicious nature tells Barry what he needs to hear. Which is he understands Barry is worried about clearing his father’s name. He promises to help Barry prove just that – a promise that rings hollow for Barry. 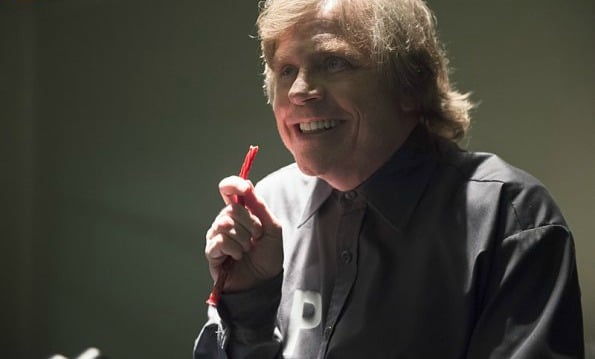 But bigger problems than Barry’s distrust soon arise. Across town, a park full of children is being inundated with small balloon-like bombs. There’s a new supervillain on the scene that identifies himself as The Trickster. This brings up an old case for Joe, who remembers some 20 years earlier when a man called The Trickster (played by the iconic Mark Hamill) unleashed terrorist attacks on Central City. This sends Barry and Joe to visit the imprisoned man, James Jess, where he’s locked away in a solitary cell. Throughout the entirety of the interview, he seems to control everything in spite of being the one without freedom. The questions Barry and Joe put to him about the para-shoot bombs yield few results. Joe wants to know if James knows the bomber and James gives them nothing but rage that someone is angling for his throne. He claims this would-be Trickster is nothing but an amateur. They do get the location of James’ lair, only upon their arrival they discover it’s rigged with a bomb. 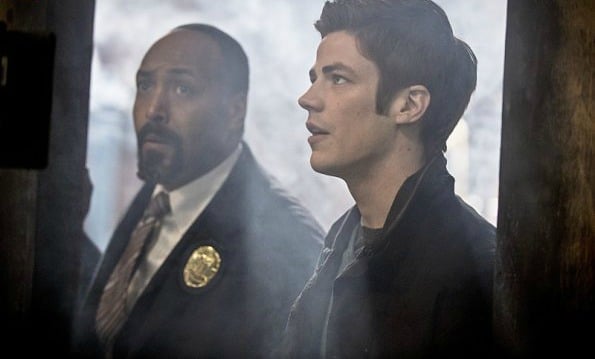 Naturally, a second trip to interrogate James is in order. While at the prison, Barry reunites with his father with a clear purpose. He wants to buoy his spirits by telling him that he is close – closer than he’s ever been to learning who really killed Nora. Regardless of his father’s warnings, Barry is still focused on clearing his father’s name.

Barry and Joe manage to get James to tell them there was a bomb in the storage facility that exploded. Needing more information than what the annoying, confident man gives, Barry riles him by showing him a video of the pretender. Naturally, this makes James furious – he sees the man wearing his mask taking credit for the work he started. Cisco attempts to trace the Trickster video, with little success because, “…this guy is using some crazy Felicity-like scrambler.” (Best quote of the night!)

Meanwhile, Iris puts her newspaper, scoop-y sleuthing skills to work. She’s worried about Mason and takes her suspicions to her boyfriend, Eddie. Mason wouldn’t just disappear, so she wants him to look into his sudden and strange disappearance. But with the entire police force working on the bomber case, Eddie has no time to work it now. This leads to an interesting revelation later on… 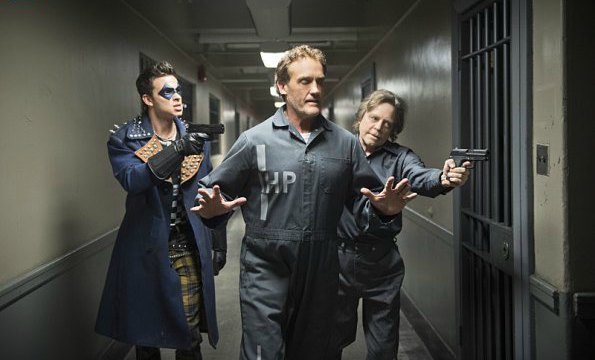 When going to her boyfriend doesn’t seem to work, Iris calls on The Flash. It’s been a while since these two were in the same room together. She’s not about to give up her hunch that something is wrong with Mason and asks The Flash to look into it. The two have a personal, poignant moment. Iris asks The Flash if he’s okay, but is interrupted by Cisco talking in Barry’s ear with bad news. The Trickster streams live again. From this, they learn The Trickster has a bomb somewhere in the city. Wells realizes it’s a trick before anyone else does – including Barry who bucks his advice. The bomb threat does what it intended by diverting Barry in another direction, while The Trickster puts his real plan into motion which is to break into Iron Gates prison. The plan all along? Break James out of prison and take a hostage: Barry’s father.

While in his hostage’s lair, Henry tries to come between the two partners, hoping it’ll affect the outcome of his captivity. James had an important strategy in picking Henry as the hostage, one that’s not going to sway him. He knows that Henry Allen has a son who works for the CCPD and James has a legacy to fulfill. Which is why he picked and groomed his protégé, Axel: as it would happen, James is his father (in what was an epic quote paying homage to Star Wars).

At S.T.A.R. Labs, Joe I.D.’s Axel Walker and learns they’ve been corresponding for years. But it’s too late to be much help to Team Flash as Henry Allen is being used for leverage. Upset that his father was taken, Barry again lets his distrust for Wells get the better of him and heads off to be alone. Joe follows behind him to console Barry. He doesn’t understand why Wells is helping him if he’s a murderer. Wise as he is, Joe attempts to smooth things over and help Barry come to grips with a potential betrayal Wells might be planning. The scene between these two is fantastic and means a lot not only to the audience (because Joe and Barry as a father/son dynamic is great), but to this relationship.

Earlier in the episode, we see a much happier Harrison Wells as he and his wife converse on a beach. It’s there his vision for S.T.A.R Labs is created, while creepy Yellow Suit man lingers in the distance (the man we saw unmasked earlier) watching the lovebirds.

Later on, as the episode winds down, Wells remembers back to the night his wife died in the tragic car crash that took her life. This also goes a long way in showing us why and how Wells knows The Man in the Yellow Suit. They met the night of the accident and in fact, he was responsible. What do we think The Man in the Yellow Suit’s words as regarding Tess (Wells’ wife) meant? “This woman has been dead for centuries.”

As everything comes to a head, we watch Iris attend a swanky mayoral event where the Trickster father and son are in attendance. This seems to be the Trickster’s legacy – his endgame. His plan goes into motion when he steals the room’s entire life savings threatening the crowd with weapons and a poison that has an antidote only they can provide. Iris manages to get a call out to her father which of course brings The Flash to the fundraiser. In his haste to save the innocent, he underestimates the Trickster and becomes useless to save anyone. The Trickster fits a bomb onto his wrist that will explode unless he keeps up a 600 miles per hour pace. With the help of Wells experience as a meta-human (an identity he is still hiding), Barry manages to create a scenario where the bomb will fall off. To do this he runs through a wall. Once he is safe from bodily harm, The Flash gets the party-goers the antidotes and disarms The Tricksters. Henry is safely rescued and following a brief visit to S.T.A.R Labs, Dr. Allen is returned to prison. Henry thanks Wells for all he’s done for his son, to which Wells replies he’ll do everything in his power to ensure Barry’s future.

Wrapping up, we flash back once more to see Wells emerge from the wreckage of his car to be confronted by the Man in the Yellow Suit. He tells him in the year 2020 Wells and his wife launched a particle accelerator, only Yellow Suit needs it much sooner, so attaching a device to Wells, it appears as if Yellow Suit becomes Wells. As the police show up, all traces of the real Harrison Wells are gone.

Finally, Joe and Eddie talk about Iris. He doesn’t want Eddie to accommodate Iris’ request to look into Mason. Actually, Joe and The Flash have this talk with Eddie, wherein Barry finally removes his mask, revealing who he is to Eddie. The three of them come up with a story about Mason to sell to Iris, who seems to buy into their lie. After this, Eddie becomes an official member of the team. So, eager participant that he now is, he wants to know what’s next. Barry’s admission closes out the episode: “Harrison Wells is the Reverse Flash.”

I am seriously fan-girling over this show right now. It’s gotten so epic! I don’t normally go for the “bigger picture” storytelling because I think shows all too often get wrapped up in that. However, this show is getting much stronger. What did you think of episode 17?

Come back on April 15th for the ‘All Star Team Up’ recap, which looks awesome!

Our romance-themed entertainment site is on a mission to help you find the best period dramas, romance movies, TV shows, and books. Other topics include Jane Austen, Classic Hollywood, TV Couples, Fairy Tales, Romantic Living, Romanticism, and more. We’re damsels not in distress fighting for the all-new optimistic Romantic Revolution. Join us and subscribe. For more information, see our About, Old-Fashioned Romance 101, Modern Romanticism 101, and Romantic Living 101.
Pin this article to read later! And make sure to follow us on Pinterest.
By Rissi JC on April 1st, 2015