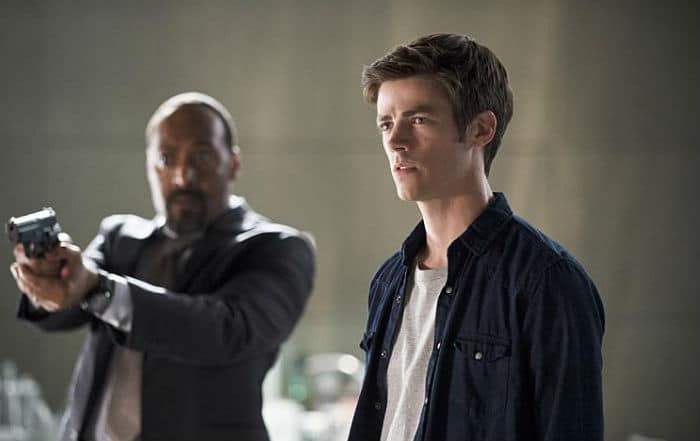 Most of the fall 2015 season premieres have come and gone. But the popular network, CW had a different (and if you ask me, maniacal) approach, which kept fans suspended in a bundle of nerves a bit longer. It’s been a long time since we’ve last been able to check in with Barry Allen and Company. When last we saw them, they were in a fight for their existence. 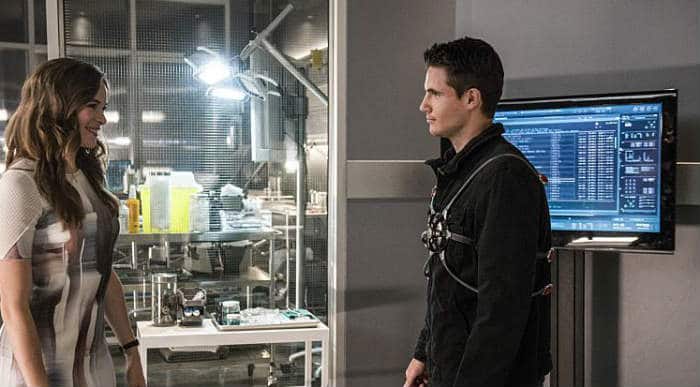 As season two opens, our hero, Barry remembers things as they might have been. He brings down two familiar metahumans with an assist from Ronnie, and upon his return to S.T.A.R. Labs is greeted by everyone, including Eddie….

This is obviously a composite of what he wishes life was. Instead, reality presents a very different picture…

After the fatal events that led to Eddie’s death and presumably, Wells, Barry undergoes a complete 180 approach. During those months, he has distanced himself from everyone and instead vows to work unaided. Caitlin is no longer a part of the team even in theory as she’s taken a position with a new lab. Cisco and Joe keep busy working on cases here and there. Iris heals from her loss. And Barry, he walks away from everyone.

Before we are really thrust into a continuation of what happened at season one’s close, there’s a murder. Barry still has his day job which means he and Joe have a crime scene to investigate. 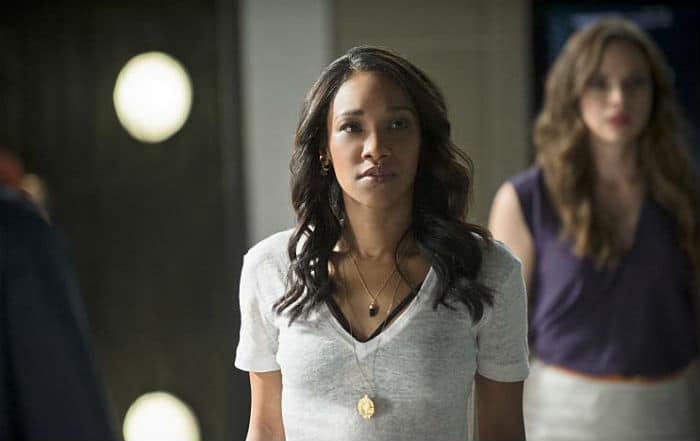 Central City suffered great losses when the singularity attempted to destroy everything and would have had The Flash not been there. Because of this, the mayor wishes to present their hero with a key to the city. This is where Iris enters. She makes the effort to convince Barry to attend the rally organized to honor The Flash. Barry remains resolute to work “lone wolf,” and that means distancing The Flash’s public notoriety. He is haunted by the day Central City was very nearly swallowed by a black hole.

He remembers the events of that day with vivid clarity. He recalls fighting the impossible. He recalls Professor Stein and Ronnie joining the fight. Most of all, he remembers being unable to save Firestorm… or at least half of him. It would seem Barry has a serious case of guilt. He feels responsible for Ronnie’s death.

As if owning the land S.T.A.R. Labs sits on weren’t enough of a reminder of Wells, Barry has a related visitor. An attorney for Harrison Wells has some information for Barry. He has a video file that was to be given to Barry in the event of Wells’ death. Naturally, Barry refuses to watch it.

Moving to the rally that honors The Flash, Cisco and Joe watch from the fringes. From there, Cisco spots Caitlin. Having not seen her in months, he’s surprised to find her there. But she’s not the only surprise appearance. Barry as The Flash also appears. None too soon either! As is bound to happen, a disturbance shakes things up. 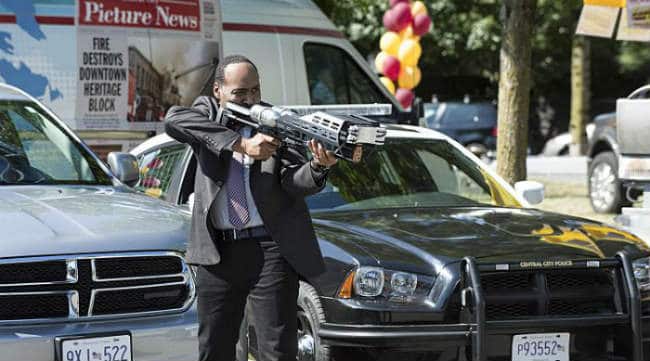 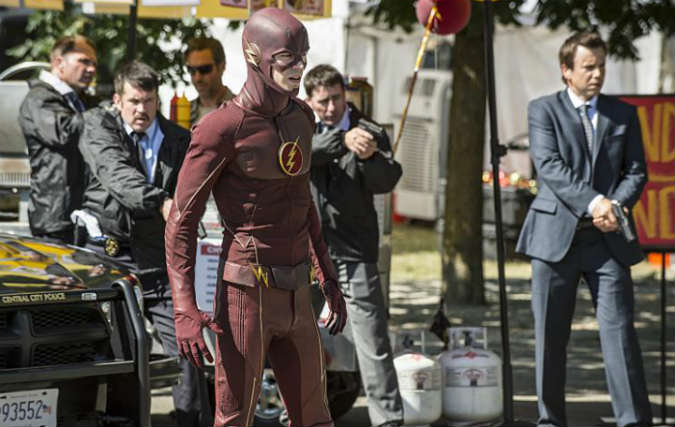 A masked man in black ruins the rally when he attacks the people of the city. Joe and Cisco spring into action, but the metahuman defies the weapons Joe implements. Instead of falling under Cisco’s invention, he grows into a giant. The identity of their masked attacker turns out to be the body they found at the nuclear plant. (Or that’s who he looks like.) In tandem, Joe and the Flash stun the villain enough to send him running.

Joe and Barry pursue this new villain through further investigation. In hopes of nudging her interest (and to use her capabilities), Cisco visits Caitlin with their evidence. Meanwhile, Iris decides she’s no longer letting Barry push them away. Iris’ plan to defy Barry’s wishes brings everyone (they’ve jointly made the decision to return to their work as part of Team Flash) to S.T.A.R. Labs. Here they learn this new metahuman seems to exist on radiation. Yet again Barry pursues the safety of Central City on his own once he learns the location of the latest metahuman.

At the warehouse a confrontation ensues, but he comes out the loser a second time. Were it not for Cisco’s quick technological thinking, Barry may have died. When he returns to the lab, he’s in bad shape. Joe stays with him until he comes to, and a heart-to-heart takes place. He tells Barry to stop assuming all the blame; everyone had a choice that day six months ago. Everyone made their choice that day. It’s time for Barry to stop hogging all the blame.

Some of the wisdom everyone has been trying to impart to Barry seeps in, and Barry finally goes to see Caitlin. He apologizes for being unable to save Ronnie. Turns out, Caitlin blames herself for Ronnie’s death. When the video USB falls out of Barry’s pocket, the two decide to play it together. On the video, Harrison confesses to the murder of Nora Allen. Barry’s father is coming home. There is happiness all around. The team reassembles and decides they’re better together than working separately.

First, they have to defeat the radiation giant. Cisco uses a light trick to call him out (I loved this Batman nod and Cisco’s comic book quote), and Barry lures him to a nuclear plant. There they implement their plan to trap him in a containment space full of radiation. The radiation does its job as Barry tries to learn who he took orders from. “Zoom” put out the kill order. (This leads to a whole slew of new questions for this uneducated viewer. Who is Zoom!?)

Henry is released from prison. At the West home, everyone waits to welcome him back. A celebration ensues and the professor gives a speech that encourages everyone to move forward. The episode draws to a close in high spirits until Henry tells Barry he plans to leave. He’s convinced Central City needs Barry to be The Flash, not Henry Allen’s kid. They hug, and out of Barry’s life he walks. 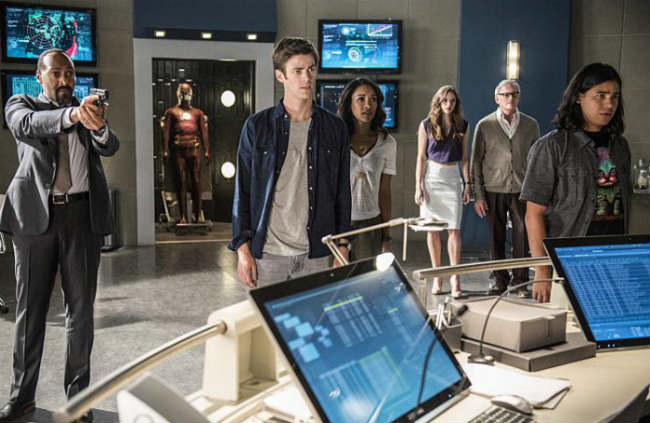 But wait. There is one more tidbit the premiere has for us. A mysterious shadow walks into S.T.A.R. Labs. Jay Garrick has come to tell Barry his world is in danger.

Did anyone think it odd that the whole Barry and Iris thing was non-existent? I don’t necessarily mean a romance, but even their friendship almost seemed non-existent. I’m not complaining in the sense that I mind the writer’s taking a step back because I’m not a fan. But given its focus and in a sense, a cornerstone of season one, I was surprised. Have the writer’s possibly reworked their relationship for season two? Only time will tell.

I don’t know anything in terms of the legend of Jay Garrick, but I’m excited about his story thread. Anyone have any thoughts on him they want to share?

How about next week? I’m especially excited as rumor has it a new character is to be introduced (and Linda Park returns!). A new character that might have sparks of the romantic kind with our hero. I’m beyond excited for everything I’ve read about Patty. Join me again for “Flash of Two Worlds” next week.

Have you any thoughts, theories to throw out, impressions or opinions on Tuesday’s premiere? Let me know down below.

Read more of our TV Recaps!

Our romance-themed entertainment site is on a mission to help you find the best period dramas, romance movies, TV shows, and books. Other topics include Jane Austen, Classic Hollywood, TV Couples, Fairy Tales, Romantic Living, Romanticism, and more. We’re damsels not in distress fighting for the all-new optimistic Romantic Revolution. Join us and subscribe. For more information, see our About, Old-Fashioned Romance 101, Modern Romanticism 101, and Romantic Living 101.
Pin this article to read later! And make sure to follow us on Pinterest.
By Rissi JC on October 8th, 2015