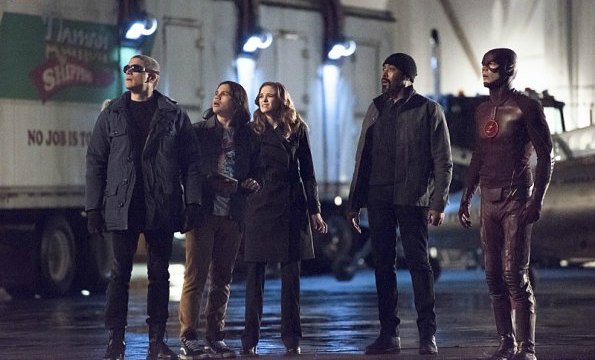 The writers upped their game with “Rogue Air,” the final episode before the season finale, bringing back (perhaps) one too many villainous characters. The episode opens with a sinister commentary from Wells about losing those we hold dear as shots of the cast (Barry, Iris, Joe) reflect on their own losses.

“I want you to take a moment, and think about all the things that define your life. All the people you love. Your job. Your coworkers. Your home. And now imagine if one day, in a flash, all of that vanished. Would you simply accept your new life and continue on? Or would you do whatever it takes… to get back what was taken from you? Because… I can assure you, I will get everything that was taken.”

In the wake of Wells’ deception, Cisco’s investigative skills are in overdrive. Because of this, he makes a startling discovery and begins to piece together the depth of Wells plans. First, Wells had a device under his wheelchair that was “powering” him, giving him more speed. Second, Wells is still in S.T.A.R. Labs. And finally, the particle accelerator is powering up again. Whatever Wells’ plans, they include the device that destroyed the city. When Wells leaves the building, Barry gives chase but he still isn’t fast enough to keep speed with the Reverse Flash.

One good thing Wells escape does bring about is Eddie’s rescue. Joe and Iris find Eddie underneath the building. While there, Iris finds the ring Eddie had been going to give her. He’s severely dehydrated, but otherwise fine, and is taken home to recover. Later, without so much as an explanation, Eddie returns to work. During this time, despite Iris asking about the ring, he pushes her away. He saw the future, he tells her. She marries Barry. 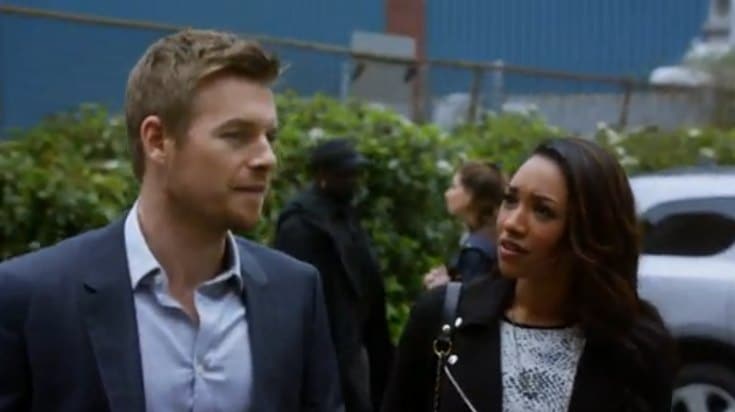 But Iris isn’t done. She makes one last effort to convince Eddie they make their own fate. Eddie isn’t comforted by her words. Since the beginning there have been three people in their relationship and he’s done. He’s made his choice… and Iris lets him go.

Captain Cold and His Rogues

Powered by the futuristic “tube” Wells created while in hiding, the accelerator regains its power again. This means that everyone in the labs (including those in their secret pipeline prison) will die. Barry suggests they move the meta-humans. Since the CCPD won’t hold the meta-humans, Barry arranges transport with Team Arrow to move them to Oliver’s secret island prison. Joe’s attempts to arrange transportation to the plane fail, with a threat to lose his career. Because of this, Barry is forced to go to an unlikely ally. Captain Cold. Since they are unable to recruit reinforcements (Ronnie, Oliver Queen or the CCPD), they need him. Lenard’s request – if they want his help, is his criminal record annihilated from the CCPD database. Barry agrees to it, but not without disapproval from Joe. Joe doesn’t believe this is who Barry is. After the deed is done, Lenard’s sister is recruited to the temporary team. At this point, some well-place humor crops up. She wastes no time in prodding Caitlin. She calls her uptight and continues her pursuit of Cisco with her flirting game. When she recalls their kiss, Caitlin is again riled: 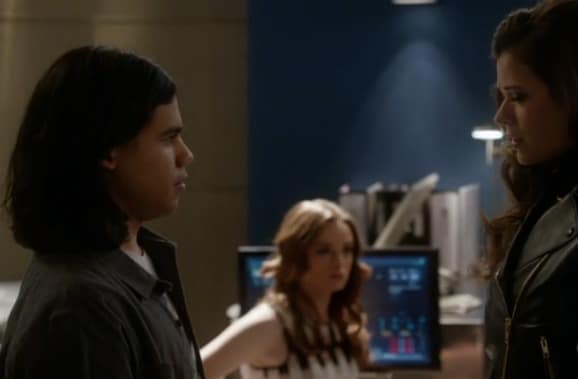 “Under duress. Calm down.” 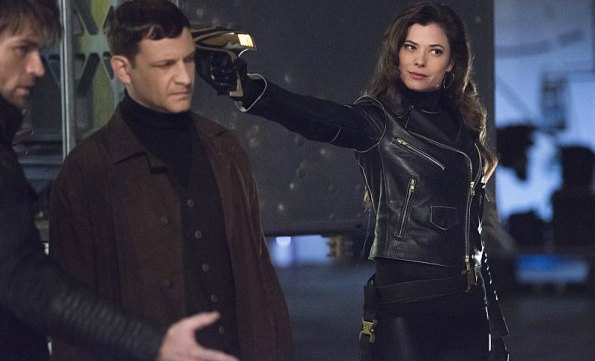 Back to the business at hand, the misfit bunch finds makeshift transportation and transfers the prisoners. Before they can load them, the incoming aircraft is sabotaged. Naturally, the meta-humans get loose while everyone attempts to fight them off. Snart and Lisa let those still standing walk away, then ride off leaving Barry to pick up the pieces. Following his latest failure, he begins to doubt himself. He looked up to Oliver and because of this he thought he could fearlessly handle this job. Always the wise one, Joe encourages him to be his own kind of hero:

“You’re not the Arrow, Barry. That’s not the kind of hero you are.”

“The kind that cares about whether those criminals lived or died. I mean, whatever Mardon and Nimbus and Shawna did, they’re human beings. And you know letting Wells use them as pawns was wrong. You know the difference between right and wrong. And you weren’t willing to blur the lines between the two. That’s the kind of man you are. And that’s what makes you different than the Arrow. So, please… no more walks on the dark side.” 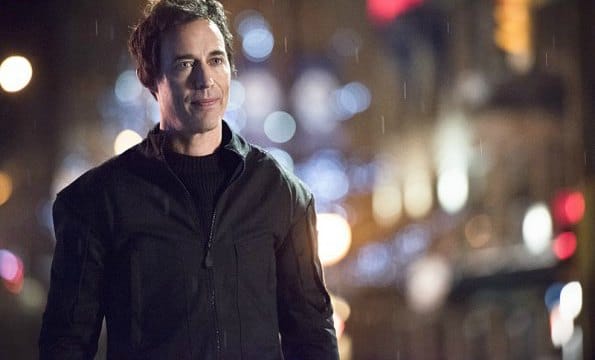 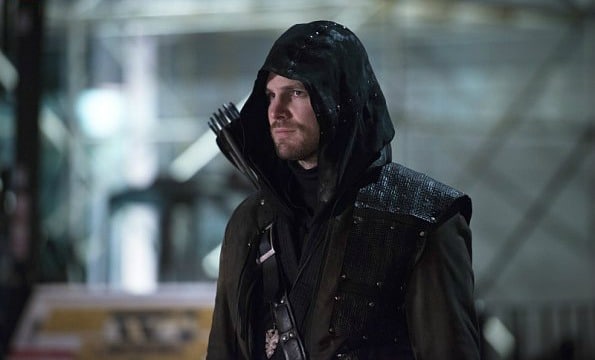 As if their prisoner transfer wasn’t disaster enough, following this failure, the pipeline returns online. This brings Wells to their doorstep where Barry faces his childhood enemy. Just in time, Ronnie and Oliver appear at the ready, poised to help Barry. Between the three of them working in sync, Wells is weakened. But he still continues to hold the upper hand, proving Barry’s earlier statement that he’s always 1,000 steps ahead. The good guys wind up with the winning hand (for now) when one of Oliver’s well-aimed arrows finds its mark in Wells’ back. 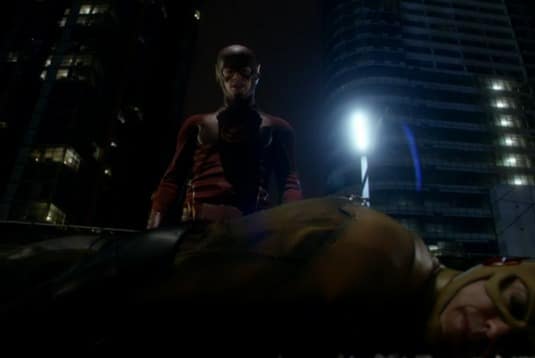 The episode ends with Barry standing over Wells saying, “I’ve got you.” But for how long?

Last night was really the first night we saw Barry flirt with crossing a line. No matter what he did, each of his decisions was made with only the best of intentions. He’s got that good guy heart no one can manipulate to their cause.

Another first was seeing Caitlin’s potentially darker side. During the prisoner transfer she is hit with one of the meta-humans “beams” and loses it on Cisco. Was this really just all it appeared to be or are the writer’s playing with her original character canon?

Though this episode was epic by comic book proportions, the reappearance of all the meta-humans seemed maybe a bit over-the-top. What did you think?

I do have to just add this into my thoughts on last night’s episode. Seeing Oliver again helping Barry was encouraging. Add this appearance to the promo video for tonight’s finale and I am hopeful all is not lost for this character.

Now that Barry has Wells, how do you think the finale will end? Are they going to be forced to let him go? Will he escape? What are your predictions for the season finale?

Join me next week for the season finale recap.

Our romance-themed entertainment site is on a mission to help you find the best period dramas, romance movies, TV shows, and books. Other topics include Jane Austen, Classic Hollywood, TV Couples, Fairy Tales, Romantic Living, Romanticism, and more. We’re damsels not in distress fighting for the all-new optimistic Romantic Revolution. Join us and subscribe. For more information, see our About, Old-Fashioned Romance 101, Modern Romanticism 101, and Romantic Living 101.
Pin this article to read later! And make sure to follow us on Pinterest.
By Rissi JC on May 13th, 2015