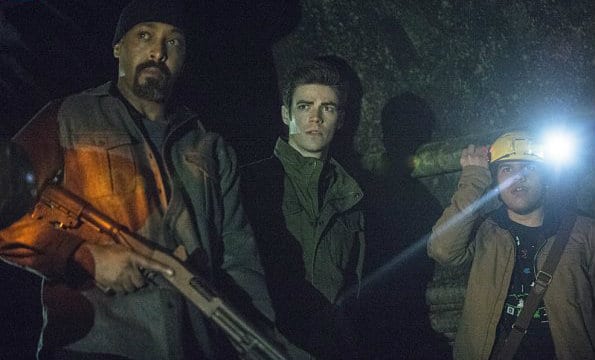 Now that the regular season is winding down, CW is busy promoting The Flash’s last two episodes. Last night’s episode was all about a new villain-of-the-week who is equal parts ridiculous and yes, terrifying. It starts with an insightful commentary from Iris:

“Think about your best friend. It could be your wife, your father, maybe someone you grew up with. It’s the person you can’t wait to talk to at the end of the day. The person who knows everything about you, who roots for you. Now imagine you discover your best friend has a secret. No, not a secret. A universe of secrets. Would you confront him? Would you remain silent? Either way, you know nothing will ever be the same again.”

This relocates us to the police department where the Captain notices Eddie’s absence. Barry and Joe attempt to brush off his absence as nothing more than a temporary leave. But Barry soon has bigger problems. An irritated Iris finally faces Barry with the truth about his secret identity. She doesn’t ask him outright if he IS the flash, but her intentions are clear. Later on, Iris does the only thing she can to uncover the truth. She shows up at S.T.A.R Labs uninvited and catches Barry sporting his Flash gear. And by no surprise, it turns out she’s upset and angry by his lies. With a detached greeting, she voices this knowledge for the first time, “Hi Barry. Or should I say, The Flash?”

Caitlin and Cisco listen in and watch the awkward confrontation. Barry’s words, “I can only imagine how angry you are,” offer little conciliation for Iris.

“I’m not angry Barry, just disappointed,” she tells him.

He confides in her about the circumstances of his mother’s death, and then drops another bombshell. Rattled by Iris knowing the truth, he reveals Wells real identity and Joe’s knowledge of The Flash. This helps nothing. Before Iris leaves in a huff, the one thing Barry does is solidify his promise to bring Eddie back.

Getting away from everyone who lied, Iris puts her investigative skills to good use by looking into Nora’s murder. When her father shows up looking for a truce, she gives him the cold shoulder as well as some fair points: “Maybe I could have helped you and Barry put the bad guys away instead of being in the way!” She then (unfairly) blames them for Eddie’s disappearance. 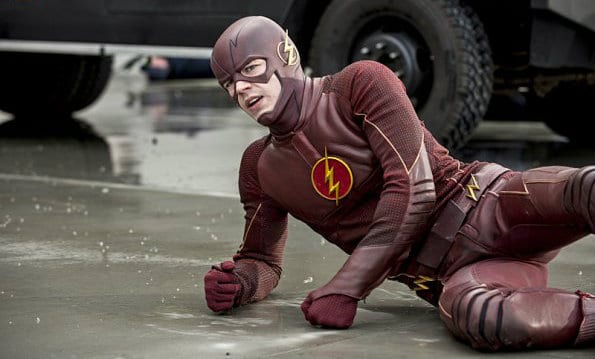 The villain-of-the-week case begins with shipments of gold, which are attacked by a masked man. Barry attempts to stop the theft but is rendered useless by the confrontation that leaves him with “overwhelming fear.” Something happened to him mentally during this face-to-face. A second attempt is rumored to soon be made on the gold, but this time Barry and Joe are ready. Their masked man happens to be General Wade Eiling. Once back at the Labs and safely in the pipeline, medically speaking, the General appears robotic. He is in a trancelike state who knows Barry is The Flash. Eiling is actually under the control of Grodd. Cisco and Caitlin fill Barry in about Wells and Eiling’s experiments with apes. Iris shows up insisting on helping and shares her investigative knowledge about the gorilla sightings in the sewers. Barry, Joe and Cisco (who is armed with a banana) set to work searching for Grodd in the sewers. They find sketches and artwork in the tunnels that prove Grodd is evolving. During the attack Grood launches, Barry is again knocked out by the same force he experienced at the robbery. Before an escape can be made, Gorilla Grodd captures Joe. 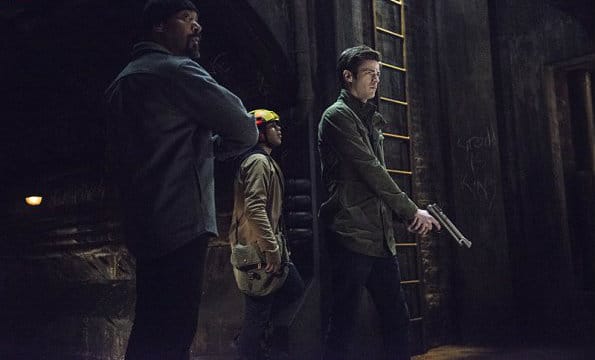 With Joe now missing, Barry has to take action and discover where Grodd is hiding him. At his mercy hidden in the tunnels, Grodd attempts using mind control by forcing Joe to shoot himself. But at the last minute, he spares Joe, and then (in a mood lightening moment), he rejects the banana Joe offers. Meanwhile, the gang at the lab is busy working all the angles. Apparently, Grodd’s accelerator effected DNA can psychologically attack his victims. Upset by her father’s capture, Iris once again blames Barry for what’s happened. 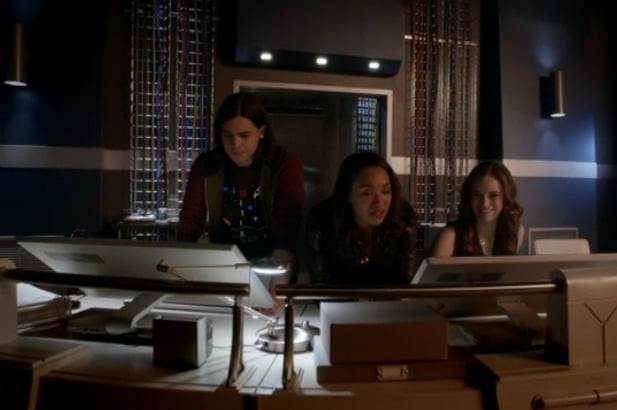 Without Wells, the team is feeling inadequate to create anything. But with Iris rallying them, they invent a piece of headgear that will hopefully protect Barry from mind control. From there, the team orchestrate another meeting with Grodd. When plan A (a supersonic punch) doesn’t work, Barry’s headgear dislodges allowing Grodd to get the upper hand. About to be hit be a speeding train, it takes Iris in Barry’s head to push him forward. It’s thoughts of her and memories of that first kiss that helps Barry work through the mind control. With Grodd hit by the speeding train, Barry brings an injured, but alive Joe home.

Back at the lab, Barry lets a returned-to-normal Eiling go. The man still holds prejudice against Meta-humans and Barry learns the General knows who Barry really is. Elsewhere, Caitlin sees to Joe’s medical needs and Cisco pesters Joe about Grodd.

Ciscco: What was his lair like? Did he eat the banana? Does he like King Kong? Is he more of a Planet of the Apes kind of ape?
Joe: Uh, terrifying. No. And I didn’t ask. 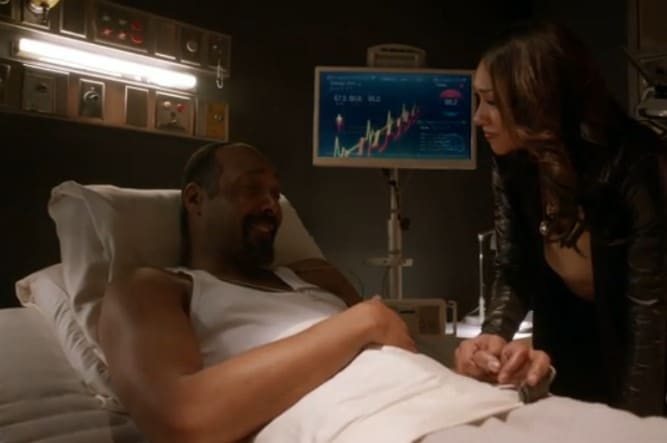 After, Iris and Joe have a heart-to-heart and find a new respect for each other. Iris knows everything her father does comes from love, so she asks him to love her enough not to lie to her anymore. Later, Barry finds Iris alone on a rooftop; their old meeting place as The Flash and Iris. She claims she doesn’t even know him anymore (puh-lease). Barry tries to help her understand why he did what he did. During his fight with Grodd, he tells her he wasn’t afraid because she was there. Because of her, he was able to stand up to Grodd. It’s the thought of her that keeps him going, “Every time I falter, the thought of you is what picks me up or keeps me going.” What he’s trying to say is just because she didn’t know everything about Barry this past year she was a part of his life. It doesn’t seem to make much of a difference. For now, she’s still professing love for Eddie. Barry wants to know what’s going to happen after he brings Eddie back. She says she doesn’t know, so it’s clear she’s beginning to question her own feelings. 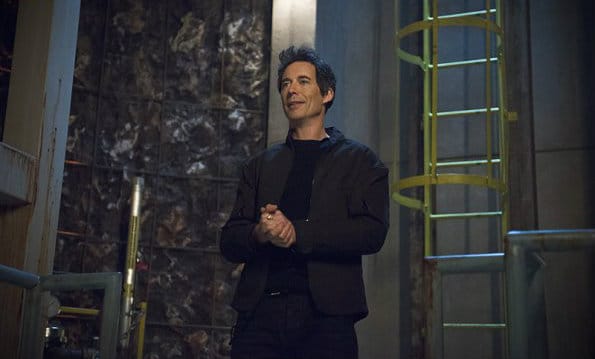 At Wells’ super-secret hiding place, he maliciously reveals to Eddie that his fate is not to marry Iris. He has the futuristic newspaper on hand with her byline boasting Barry’s last name. And elsewhere, as the episode winds down, we see Grodd is still alive and well as he scales a building. Then there is one last image of Wells working on his plans. He’s putting the final touches on his latest invention and now has the “key” that lights up his secreted invention. It’s time for him to go home.

I know I talk about this a lot, but… I am still not Iris’ biggest fan. She was prominent in this episode and if this was any indication, it looks like she might be about to become an honorary member of the team. I found her to be more unreasonable than normal in this episode and I’m sorry, but that whole “I don’t know you anymore” line is way overused.

Though Grodd is an actual DC Comics villain, I have to admit putting an ape in a villainess role is hard to take seriously. What did you think about this unleashed “distraction” presumably at the hand of Wells?

I’m particularly excited to see next week’s episode since I’ve not seen Oliver (Arrow) since his rise to “dark” power. What are your predictions for the rest of the season? How do you see this ending?

Join me again next week for “Rogue Air.” This episode looks epically awesome with the return of Oliver and Firestorm to Central City. What do you think will happen?

Our romance-themed entertainment site is on a mission to help you find the best period dramas, romance movies, TV shows, and books. Other topics include Jane Austen, Classic Hollywood, TV Couples, Fairy Tales, Romantic Living, Romanticism, and more. We’re damsels not in distress fighting for the all-new optimistic Romantic Revolution. Join us and subscribe. For more information, see our About, Old-Fashioned Romance 101, Modern Romanticism 101, and Romantic Living 101.
Pin this article to read later! And make sure to follow us on Pinterest.
By Rissi JC on May 6th, 2015