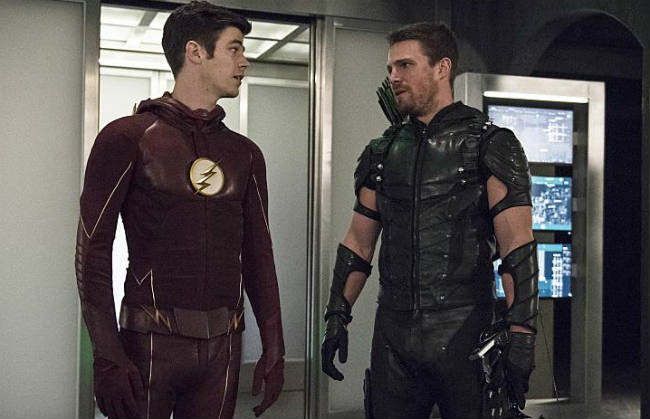 Anytime the CW’s DC Comics worlds collide, excitement is a general “rule.” After a week off from these shows, last night’s episode returned with a bang combining the meta-human world of Central City and the dark world of Star City (which made for a surprisingly light-hearted hour). It was the first part of an epic showdown that is working towards the “bigger picture” goal of CW’s highly publicized spin off Legends of Tomorrow.

As the episode begins, Barry’s self-doubt continues to be in play. His voiceover talks of running faster than he’s ever run, yet it’s still not fast enough. Memories of his defeat at the hand of Zoom continue to assault him. He’s clearly not over the brutal attack. And while this is part of the reason he decides to eventually make a trek to Star City, more pressing matters soon arise.

As a boat docks in Central City, a stowaway is aboard. Taken off the boat in handcuffs, the magician-like man murders his captors once he hits landfall. Of course, Joe and Patty land this new case involving multiple homicides. The threat of a new meta-human hangs over their heads even though they don’t know who the newcomer is or who they’re looking for…

The Flash and Star City

Before diving into what goes down, we see Cisco happy to be in a relationship. The lucky lady is Kendra Saunders, a woman who might have a mysterious past. For now, Cisco is ignoring the vibe he had when last he kissed her and enjoying the meal she set up for their date. That is until Magician Man makes his way to the Café to threaten Kendra, whom he refers to as “Priestess.” Fortunately, Cisco gets a call into Barry in time for him to send the man temporarily packing. 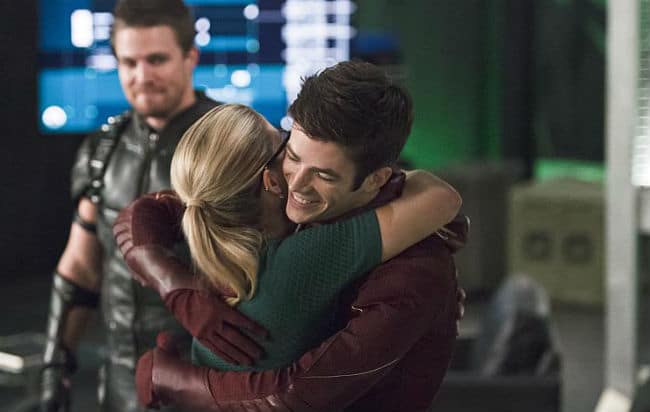 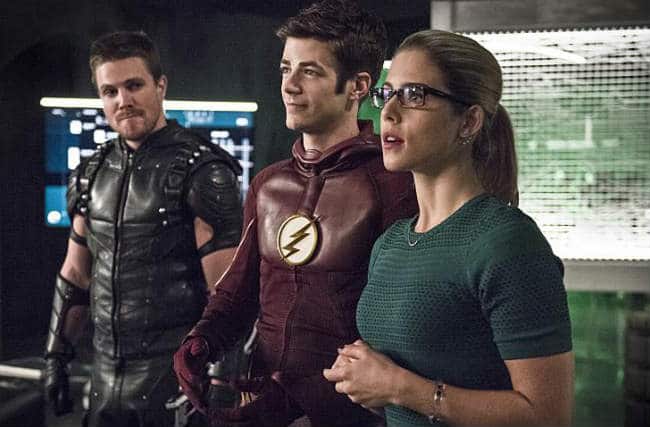 Barry’s solution to all of this is a visit to Star City. Cisco has his doubts. He believes more than Kendra’s safety is behind Barry’s sudden interest in recruiting Team Arrow. As they arrive in Star City, The Flash is immediately put to work. He has to rescue Green Arrow from the hands of Damien Darhk (who Arrow fans know is Oliver’s current big bad nemesis). Following this, a fun introductory scene takes place at Team Arrow’s new digs. 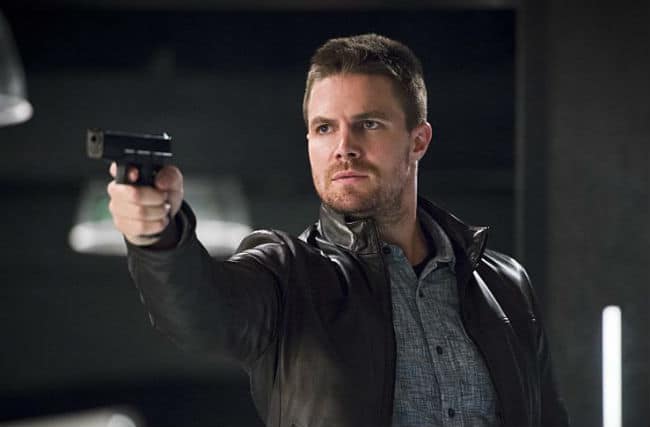 Later on, while enjoying drinks at Oliver and Felicity’s place, Vandal makes a second attempt on Kendra’s life. In tandem with The Flash and Oliver, Thea’s well-placed arrows (her rage continues to irk Oliver, who is trying to help his sister) temporarily puts a stop to his pursuit. Malcolm’s unexpected visit informs everyone who Vandal is and the danger he poses. You see, he’s immortal and he’s not yet done with Kendra.

Though this show has more than just romantic entanglements, it only seems fair to give a shout-out to the romances. I don’t know that the Cisco/Kendra romance will lead anywhere or work now that her soul mate is returned, but they’re really cute together. And of course, this wouldn’t be a complete recap if I didn’t mention Oliver and Felicity. Seeing this more peaceful side of Oliver and them together makes my fangirl heart that much lighter. These two deserve some happiness which is why I’m nervous for what else might come in Arrow’s fourth season.

The Emergence of Hawkgirl 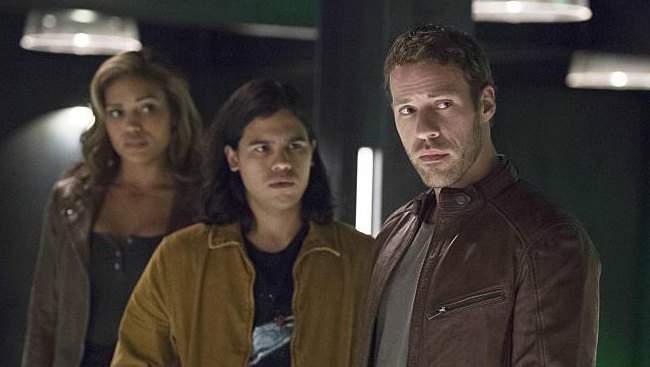 After Vandal is sent flying out of Oliver and Felicity’s window, Cisco is forced to tell Kendra about his powers. Before she can make sense of this, a winged creature swoops in and removes her from those trying to keep her safe. He is Katar Hol or as he was known, Carter Hall. He explains the past (they are soul mates) he shares with Kendra, hoping it’ll force her to emerge and return to her true self, the Priestess. He wants her to embrace who she is with the help of her scepter, which no one knows the hiding place of. Eventually, Kendra does what needs to be done to bring her alter ego to the surface. Keeping true to his tradition, Cisco dubs her Hawkgirl.

Meanwhile, Green Arrow and The Flash are again face-to-face with Vandal, who is in possession of the scepter. Before they can gain possession of it, Vandal blows the building up and disappears before Oliver or Barry can stop him.

First up is the banter between Oliver and Felicity, which may I just say is darling. Watching the current season of Arrow (which I’m not watching live) is going to be a treat. This scene showing Felicity at her computers, talking to herself while the gang is out fighting Damien is one primary reason why:

Felicity: Felicity, the magnetic arrow gag will never work. Ha. Yes, it will my love, because I am really smart. And guess what, Oliver, it DID work!

Oliver: Felicity, honey, it’s a little hard to fight with you doing that in my ear.

Felicity: Oh, I totally forgot that this was an open line. Keep doing what you’re doing. Make smart decisions.

– While everyone travels to Star City, Wells and Caitlin begin work on a new velocity drug that might help Barry up his speed game to assist in his defeat of Zoom. Jay is brought back with the purpose of Wells using him to test the serum. When he refuses, he leaves warning Caitlin to keep this drug away from Barry.

– Not to be lost among the crossover awesomeness, Patty discovers Wells is, in fact, quite alive. This happens by chance. She spots him outside a building and eventually she finds her way to the labs. Once there, she shoots Wells in defense (believing the needle device he was holding was a weapon) and he very nearly loses his life. Caitlin stabilizes him, but it takes Jay using the serum to save his life. Who else suspects Patty’s days of being in the dark are numbered?

– As the episode closes, Oliver sees his college girlfriend (you know, the one Mama Queen paid to go away) and with her, a young boy. It would seem Oliver has learned he is a father. To me, the return of Oliver’s ex signals she may become a bigger player later in Arrow’s season. But either way, I’m iffy on what this storyline will a.) do to Oliver and b.) the impact it might have on the relationship between him and Felicity.

What did you think of “Legends of Today?” I thought it was epic (the writers need to bring these two worlds together more often), and would love to chat with you all about it and anything you believe is being hinted at. Join me next week for a recap of “Running to Stand Still,” the winter finale.

Our romance-themed entertainment site is on a mission to help you find the best period dramas, romance movies, TV shows, and books. Other topics include Jane Austen, Classic Hollywood, TV Couples, Fairy Tales, Romantic Living, Romanticism, and more. We’re damsels not in distress fighting for the all-new optimistic Romantic Revolution. Join us and subscribe. For more information, see our About, Old-Fashioned Romance 101, Modern Romanticism 101, and Romantic Living 101.
Pin this article to read later! And make sure to follow us on Pinterest.
By Rissi JC on December 2nd, 2015