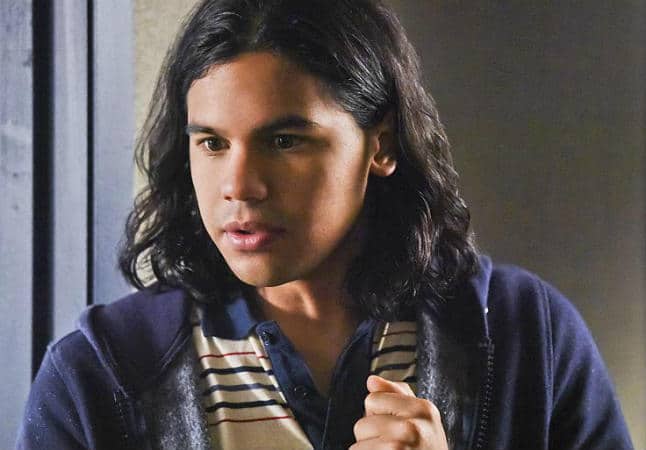 As closely interlaced as each of The Flash’s episodes have been thus far, Tuesday night’s episode, “Enter Zoom,” was perhaps the most anticipated episode. This is because this hour was to bring The Flash face-to-face with his most dangerous enemy yet: Zoom. (All of this Intel is, of course, dependent upon trusting Jay Garrick and Earth-2 Wells. Which, so far, I do.) With that said, let’s dive into the good, bad and ugly of ‘Enter Zoom.’

The episode opened on an ominous note with Dr. Light defeating The Flash. Before we can get to THAT, first the clock needs to be reverted to 72 hours earlier. Here’s what goes down. 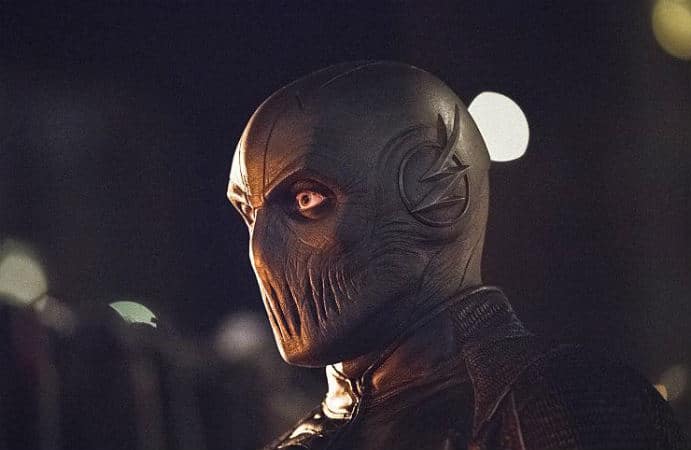 Barry seems to be overestimating his abilities a bit these days. Instead of trusting in Jay’s word (who is still MIA), he instead sets a plan into motion to trap Zoom. The start of that is born with Dr. Light. While imprisoned in the pipeline, The Flash confronts her, intending to use her as a source of information. Her mission, she says, was to kill The Flash and send something back through the portal as proof. When that failed, she did the next best thing: attempted to kill her doppelganger Linda Park in order to fake her death, and by proxy, escape the clutches of Zoom. 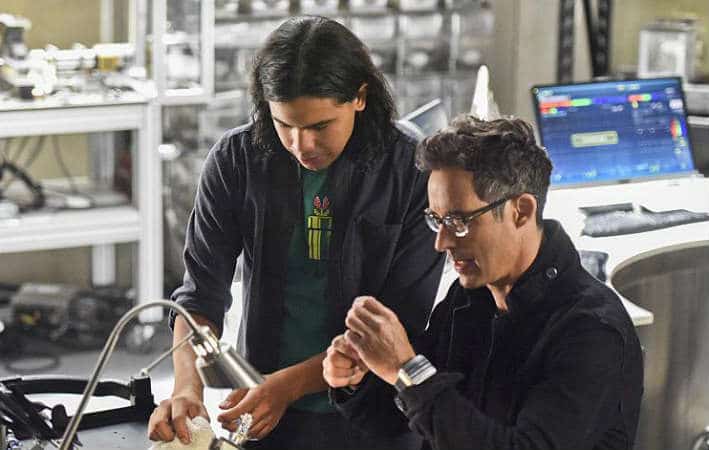 Much to the horror of everyone but Earth-2 Wells, Barry plans to use Light to lure Zoom to their world, confront him and be rid of him for good. Everyone seems to warn Barry against him. Naturally what this does is cause Cisco to attempt to use his newfound “vibing” metahuman coolness to see what it is Wells is hiding. After multiple tries, he does just that. Cisco sees someone named “Jesse” (a new DC Comics character being born with this character) being threatened by Zoom on Earth-2. If only he knew what it meant.

In the midst of all of this, Light tricks Cisco and escapes the Lab’s secure cell. As one might imagine, this brings Barry’s plan to a crashing halt.

Linda Park is again in this episode, understandably so considering her psycho twin is still running around. Because of this, she appeals to Iris: she wants to meet the Flash. She wants to help bring down this woman who looks so much like her. Iris’ objection is due to Barry’s dislike of bringing innocent humans into any of their missions. But with Light gone, Barry sees no other option. Eventually, he decides to meet with Linda as the Flash, giving her the choice. They ask her to pose as Light in order to move ahead with their plan of trapping Zoom. One disastrous training session later and Linda is feeling useless. This is why The Flash reveals his true self to Linda. She now knows The Flash is her ex.

Their plan to trap Zoom with a fake death of The Flash doesn’t go as planned. Linda (as Dr. Light) “kills” The Flash, Wells and Joe keep to the shadows with their weapons as Cisco and Caitlin keep watch on the security cams at the lab. But their ruse doesn’t seem to draw Zoom out. All this accomplishes is Wells’ anger as he remembers the reason for his anger: his daughter.

Patty is feeling left out of the meta-human investigation, and more importantly, she’s feeling shut out of Joe’s trust. This makes her feel insecure and confused because she knows Joe is upset about something. This forces her to confess: she and Barry kissed, she tells him. Needless to say, Joe couldn’t care less! It would seem Patty’s secret isn’t the reason Joe is holding back. Little does she know it’s because he works with The Flash.

I realize I’ve been talking overmuch about the whole Patty and Barry thing. But I’m sorry… I’m going to defend them and I do ship them together. I think part of that is because Parry was teased as a kind of Felicity Smoak (who I did like with Barry had I not already fallen for Olicity). She really isn’t. I mean sure there are reflections of the adorable tech geek, but Patty is her own person. If ever she is flipped into a villainess, I might cry. Barry’s latest worry is buying into what Harrison Wells said to him on his confession video: Barry won’t ever be happy. After being prompted by Joe to go after what he wants, finds Patty (already having refused her dinner invitation) and kisses her.

Asking him what that was for, he tells Patty that she makes him happy and he’s trying to go after what makes him happy. Her reply: “We should do more of that then.” With smiles, the pair returns to their impromptu kiss.

The Doom of Zoom… and THAT ENDING 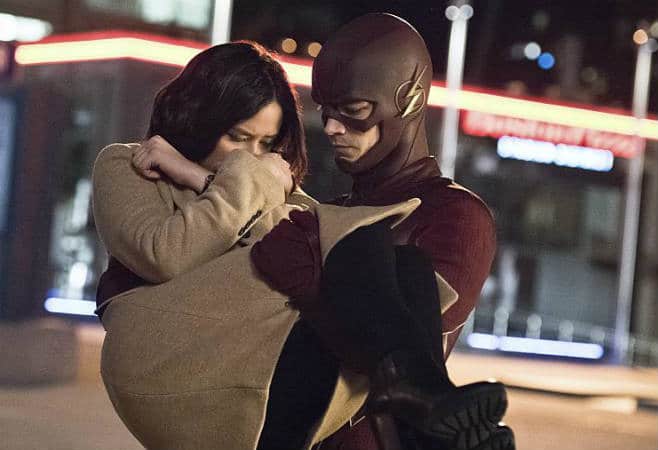 Eventually, Zoom does make it to Central City. He shows up in spectacular fashion by surprising everyone. Barry is unprepared and the face-off between them doesn’t go well. Barry throws everything – including lightning at his new foe. Nothing works. Not even Wells trying to shoot him nets results. Zoom instead takes out his anger on Barry. He beats him unconscious and drags him through the city. From Iris’ offices to the police station, he has a message: The Flash isn’t going to help Central City against him. Finally, he brings him back to S.T.A.R. Labs. There he leaves Barry. Cisco manages to get one shot off temporarily blind sighting Zoom who still escapes. 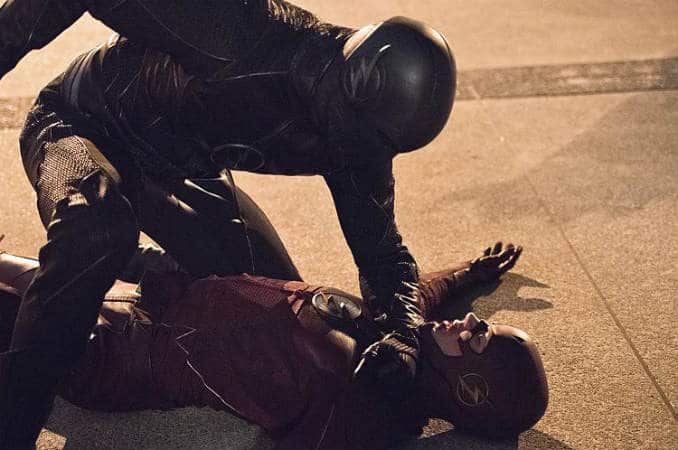 Caitlin patches Barry up and Joe takes out his anger on Wells for entangling Barry in this mess. When Barry finally comes to, he discovers tragic results. He cannot feel his legs…

What did you think of this week’s episode? Have any theories: what do you think the writer’s are setting up with Zoom’s appearance? Who is he? Sound off below with your thoughts!

Our romance-themed entertainment site is on a mission to help you find the best period dramas, romance movies, TV shows, and books. Other topics include Jane Austen, Classic Hollywood, TV Couples, Fairy Tales, Romantic Living, Romanticism, and more. We’re damsels not in distress fighting for the all-new optimistic Romantic Revolution. Join us and subscribe. For more information, see our About, Old-Fashioned Romance 101, Modern Romanticism 101, and Romantic Living 101.
Pin this article to read later! And make sure to follow us on Pinterest.
By Rissi JC on November 11th, 2015