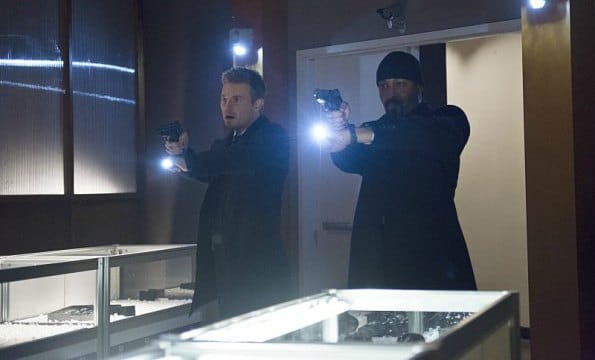 The Flash All Star Team Up

It’s safe to say the excitement for this week’s episode of The Flash All Star Team Up was off the charts. Seeing Barry and Felicity work together is always a source of amusement. You’ll remember the last episode ended with Barry’s realization that Wells isn’t all he seems. Following that, Barry and Joe trusted Eddie with the secret of Barry’s identity. This week’s episode crosses over with the Atom and hunts up more background on Harrison Wells.

RELATED: The Flash Recap: Tricksters, Wells Past and Barry’s Mistrust

This week opened with a hilarious sequence involving the three guys. Barry, Joe and Eddie pursuing and arresting robbers. But since this is a show about meta-humans, ordinary robbers aren’t Barry’s biggest problem. There is a new villainess stalking Central City. Her first victim is an engineer whose entire body is full of puncture wounds. The weapon of choice turns out to be honey bee venom. Cisco’s reaction is full of fear with a hilarious quote to go with it:

“Y’all, I don’t do bees. I ain’t got time for bees… anyone want to join me in getting a beekeeper suit?”

Barry: “Pretty sure I can outrun a bee.”

Felicity and Ray in Central City 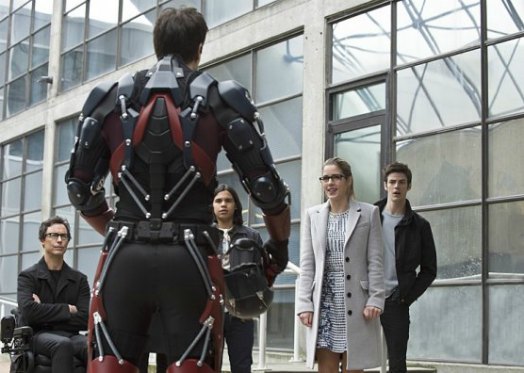 Felicity Smoak’s entrance cue: She has come to Central City with a purpose along with her boyfriend, Ray Palmer. Team Flash meets Ray, who is dressed as the Atom (in a nice wink wink to his stint his Superman). Ray needs assistance from S.T.A.R. Labs to perfect his Atom suit. Cisco eagerly volunteers to help his scientific-minded new best friend while Barry, Caitlin and Wells pursue the bee-killer.

Sensing something is wrong with Barry, Felicity suggests a coffee run while everyone else is busy. She’s worried about Barry and everyone around him. She always thought “Central City was the fun one.” Before she gets Barry to talk, Eddie arrives and finds out everyone but Iris knows Barry’s secret. Eddie’s relationship troubles with Iris inspires Felicity to plan a night out for the five of them in the hopes to repair damage.

At the labs, Barry, Felicity and Ray get ready to leave for Felicity’s dinner. It’s the kind of dinner made of fairytales given that Ray buys out the entire restaurant. There were many fantastic one-liners in this episode, but one of my favorites was the reaction Felicity had to this: 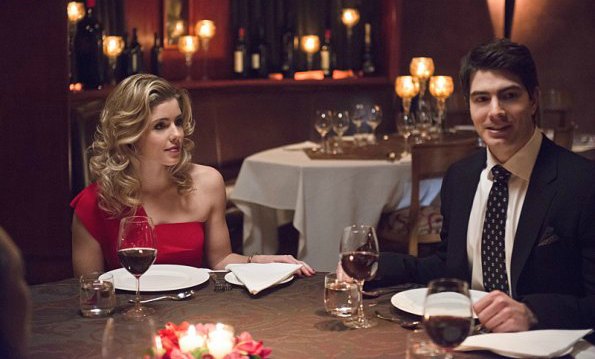 During dinner, Ray shares their meet-cute story, which sparks an argument between Iris and Eddie. Barry takes a breather, while Felicity chases after him pretending to go to the restroom. Behind closed doors, Felicity tries to get through to Barry about his reluctance to open up. She wants to know what’s wrong with him! Barry confides in her about Wells and his possible secret life. (At one point, Felicity even uses her past with Oliver as an example of blind trust. She reminisces about how she trusted him even though she didn’t know why he was asking her to do weird things. She did it because she knew he was a good person. All of this is meant to demonstrate Barry shouldn’t doubt Cisco and Caitlin.) Iris and Eddie continue to fight as Barry’s confession to Felicity takes place. Suffice to say, the dinner that was meant to be a fun night out is disastrous.

The Murder of Cisco Ramon

Once a solution is reached for Ray’s suit, Cisco’s memory is triggered by something Ray says. A dream-like flashback flashes across Cisco’s memory. He remembers back to the night Wells murdered him. More than once.

Barry and the Bee 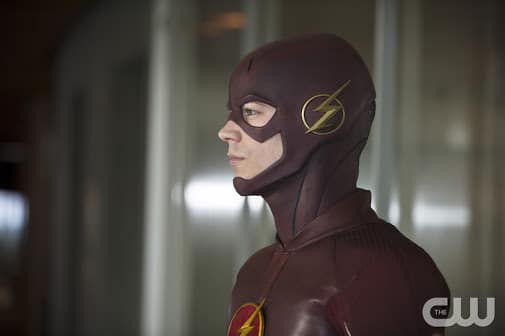 Meanwhile, the Bee Killer takes another stab at murdering one of her targets. Barry finds the unsuspecting victim too late, lying dead at his workplace. While there, Barry is the victim of an attack before he can escape the building. Joe finds him in anaphylactic shock lying on the ground. Fortunately, thanks to Cisco’s ingenuity and Caitlin’s knowledge, they manage to resuscitate Barry.

One of the more prominent stories in the episode is Iris and Eddie’s relationship. Iris senses Eddie is holding something back. (Good intuition Iris.) Her attempt to acquire the truth yields zilch. This results in Iris moving back to her father’s home where Barry finds her. Once there, even he tries to soothe Iris’ doubt about Eddie. Instead of confiding in her (which might have been a solution), he tries to talk her back to Eddie.

Eventually, Iris visits Eddie at the station with her decision. He either tells her what’s going on, or in unspoken terms, they are over. 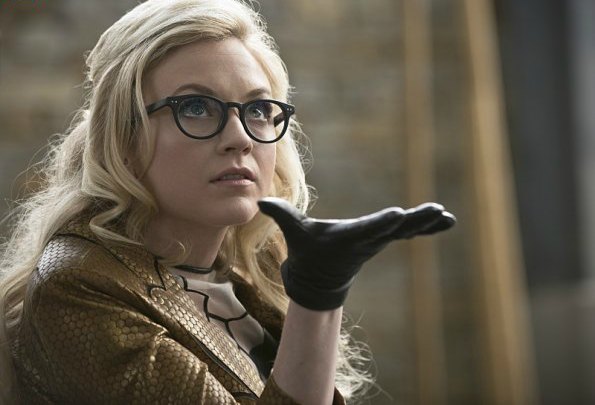 Following Barry’s brush with death, a bee remained hidden in his suit. At the labs, it tries to do its worst. Barry captures it and Cisco discovers the bee is actually a robot. Now the team is getting somewhere. Felicity pitches in with the investigation when they realize the robot is science-based, not a meta-human. The two victims’ former boss happens to be Dr. Tina McKee. Having also employed their bandit, she provides them with a name. They’re looking for Brie Larvan. She’s a roboticist who was at one time creating technology for the military.

The next swarm of bees heads straight for Mercury Labs and Dr. McGee. Ray races off to distract the swarm (his suit protects him). As Brie (or the Bug-Eyed Bandit as Cisco dubs her) is distracted by revenge, Barry finds her hiding place. Felicity hacks into the bees just in time to save Barry from their poison. While hacking in, she finds out how good Brie really is. Her response: “I’ve never had a nemesis before. I kinda’ like it.” A technical battle of control over the bees ensues. Felicity bests Brie in the end allowing Barry to safely arrest her. Just when everyone returns to HQ and the danger seems to have passed, Cisco gets into trouble. He is the victim of a bee sting (purposely taking the sting to save Ray) lying dormant in the Atom suit. Fortunately, Barry saves him thanks to his powers.

Grateful for her life, Dr. McGee thanks Barry for his protection. A chance encounter Barry capitalizes on. Knowing Wells has a history with the doctor, he asks her about her former friend. She tells Barry after Tess died Harrison Wells became a completely different person.

Later, Ray and Felicity prepare to leave Central City. Ray walks away with the solution to his Atom suit and Felicity feels better about Barry’s state of mind.

As the lead-in for next week, Joe and Barry take a risk. They ask Caitlin and Cisco to help them investigate Harrison Wells. Caitlin goes into denial. Cisco on the other hand doesn’t find the notion so difficult to comprehend.

With Felicity being a part of the story, it was nearly guaranteed that there’d be copious amounts of brilliant humor. As one would expect, she entertained by just being Felicity and her klutzy ability to call things as she sees them. Though I found many of her quips hilarious (as evidenced by their presence in this recap), this one was particularly memorable.

While talking with Caitlin about how lucky she is to have Ray, this is how she described dating him to be like:

“It’s kind of like I’m dating Barry, but in Oliver’s body.”

This episode really had nothing to say about Caitlin and was more Cisco-centric. I wasn’t expecting him to have those flashbacks. The idea that Cisco might actually retain knowledge from another timeline is an interesting thought. Perhaps a story to play with?

Since I’m not current with the seasons of Arrow, this was the first time I’ve seen Felicity with Ray. I have to say, I adored the two of them together. Am I still fully committed to Olicity? Of course. But for a little while, this is cute.

Am I the only one nervous about Wells uncovering so many of the good guys identities?

Join me again next week for a recap of “Who is Harrison Wells?”

Our romance-themed entertainment site is on a mission to help you find the best period dramas, romance movies, TV shows, and books. Other topics include Jane Austen, Classic Hollywood, TV Couples, Fairy Tales, Romantic Living, Romanticism, and more. We’re damsels not in distress fighting for the all-new optimistic Romantic Revolution. Join us and subscribe. For more information, see our About, Old-Fashioned Romance 101, Modern Romanticism 101, and Romantic Living 101.
Pin this article to read later! And make sure to follow us on Pinterest.
By Rissi JC on April 15th, 2015

2 thoughts on “The Flash All Star Team Up Recap: Cisco’s Flashbacks and Felicity Smoak Quotes”