The Dark Days Pact is Book Two in the Lady Helen trilogy by Alison Goodman. The first book in the series, The Dark Days Club, came out last year. Book three is being written as I type this, and there are many, many fans awaiting the final installment and the final reveal. I know I am! And we are looking forward to it because this series is great fun. It’s Regency-era, historical fiction blending fantasy, romance and demon hunting. There’s something Buffy-like to our young heroine, so if you’re a fan of Buffy the Vampire Slayer, this series might just be a good fit. 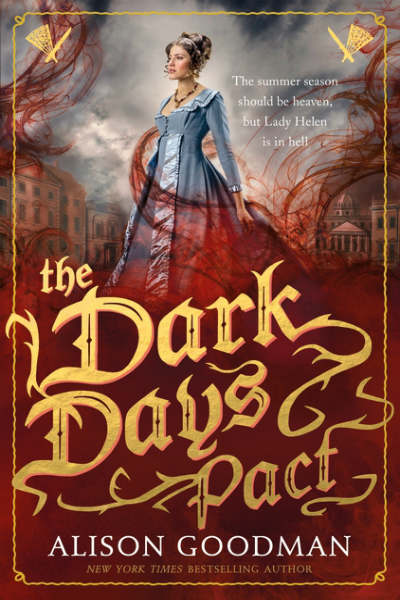 It is difficult to discuss Book Two without first giving some background from Book One. As with many story arcs, the first book dealt with our heroine discovering her powers and this secret world of demon hunting. The second book, The Dark Days Pact, has been her training in this new role and new world. And the third, well, we’re all expecting the third to be the big showdown, where it all comes to a head.

The year is 1812. The place is London, England (Book One), later Brighton (Book Two). Our protag is one Lady Helen Wrexhall, a genteel eighteen-year-old, raised to be a lady within the confines of polite society. But life has other plans. Lady Helen is a Reclaimer. And what, pray tell, is a Reclaimer, you may well ask?

A Reclaimer is one who reclaims bodies and souls from the demonic clutches of the Deceivers. The Deceivers are ancient bodiless “souls” – demons, fallen angels, whatever one may call them – who possess the bodies of mortals, sucking the life energy from their hosts and their fellow humans. Reclaimers are mortals with special powers to fight and exorcise these demons, to reclaim the possessed bodies for mortal souls (if they can).

This whole realm of Reclaimers and Deceivers and this ancient war is, naturally, a secret, unknown to the uninitiated. The Dark Days Club is just that, a secret club dedicated to the control and maintenance of this secret, dispensing justice as necessary. You see, Deceivers and Reclaimers have made a Compact, a sort of uneasy treaty, whereby Deceivers can possess bodies, as long as they don’t get gluttonous and begin fomenting upheaval (which Deceivers are wont to do).

And then there’s Lady Helen; she is different. She is a direct inheritor of her Reclaimer powers – something that never happens, yet has been prophesied about. And she is female. This raises all sorts of issues. As Helen is the apparent fulfillment of a prophecy, there is the other part of said prophecy, which heralds the coming of a Great Deceiver for an End-of-Days-type showdown.

As a female Reclaimer, she is thrusted into the moral mire that is demon slaying and reclaiming. All the confines and mores of genteel society regulating female behavior are challenged. She must become the prophesied warrior and that requires shedding some of those petticoats and entering the world of men as a man. And she must forge some relations with men, other members of the Dark Days Club, that are decidedly taboo.

One man, in particular, is full of boundary-crossing dangers and dilemmas for our heroine: Lord Carlston. He is her mentor, her trainer, her coach. He is a Byronic beauty of a man, full of brooding virility, a scandalous past and alluring danger. To be a Reclaimer takes its toll on one’s own soul. Remnants of Deceiver energy always remain, cluttering, slowly poisoning, turning one mad. Lord Carlston is now ill, becoming a possible liability, and it doesn’t bode well. Can she save him? Will he let her? And what are the costs?

Lady Helen has made an oath to the Dark Days Club, to King and country, and her own desires, loves, wishes, dreams are now subsumed to that oath. She is now a Reclaimer first and foremost, and that necessarily means that the genteel life she was groomed for is no longer an option. The moral codes she has adhered to are often transgressed, and the faith she has clung to is perpetually challenged. And it is this that makes Lady Helen such a compelling character and the series such an engaging read. She is a woman trapped now in this seemingly moral abyss, trying to plot an uncharted course for her life as it now is, grieving what never can be, putting duty above the desires of her own heart. It’s good stuff.

Alison Goodman’s Lady Helen series is an impressively well-researched delight. There are so very many rich details from the Regency era that it all feels very much alive. For example, there’s a fantastic scene describing how women bathed in the ocean back in 1812. So, you’re learning as you’re reading, learning about things that you’ve never really thought about before. But it’s really interesting. There’s adventure, intrigue, danger, mysteries, moral dilemmas, danger. Again, Lady Helen is a great, complex, relatable character. She and Lord Carlston have great forbidden chemistry, so the longing, the gazes, the touches – it’s fabulous romantic tension. And yeah, there’s another suitor, a certain handsome Duke, representing her old world and her old life, but I’m suspicious of him and no fan (-:

You’ll just have to read it for yourself and decide.

Adaptation Recommendation: I would love to see The Dark Days Pact as a movie series in the vein of Pride and Prejudice and Zombies. It could be great fun. And I could certainly envision Richard Armitage as the brooding Lord Carlston, however, he’s probably too old for the role now.

Content Note: A novel about demon slaying necessarily means that there is some violence, although not depicted in explicit gore. There are unsavory characters and intense situations in The Dark Days Pact. Prostitution and a bawdy house are depicted, but again nothing explicit. Our heroine does joke about dressing as a man and having to pad down there. It’s not lewd or crude, just humorous. Demons are by nature rather lascivious, but descriptions of their behavior are kept rather tame, refraining from lurid details. So, it’s all pretty clean.

Our romance-themed entertainment site is on a mission to help you find the best period dramas, romance movies, TV shows, and books. Other topics include Jane Austen, Classic Hollywood, TV Couples, Fairy Tales, Romantic Living, Romanticism, and more. We’re damsels not in distress fighting for the all-new optimistic Romantic Revolution. Join us and subscribe. For more information, see our About, Old-Fashioned Romance 101, Modern Romanticism 101, and Romantic Living 101.
Pin this article to read later! And make sure to follow us on Pinterest.
By Jessica Jørgensen on October 24th, 2017