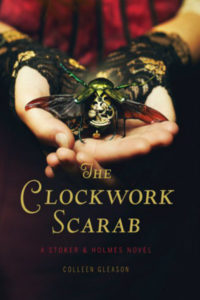 YA Book Review: The Clockwork Scarab (2013) by Colleen Gleason

Colleen Gleason’s first novel in her Stoker and Holmes series is fun, good, good fun. The Clockwork Scarab builds a world and a fantastical reality that is playful and engaging. Its two main characters are compelling. The fourth book in the series arrives on bookshelves this July, so there is definitely time to catch up on this delightful series.

The Clockwork Scarab is set in an alternate Victorian-era London, England, where steam is king, electricity has been banned, Bram Stoker has a vampire-slaying younger sister named Evaline, Sherlock Holmes is real and has a brilliant niece by the name of Alvermina, called Mina for short. These two gifted young women hook up to solve crime – that’s the book in a nutshell.

The two are brought into an uneasy partnership by Irene Adler (yes, “the woman” from the Sherlock Holmes story), who has been tasked with a clandestine assignment from the Princess of Wales to investigate the mysterious murders/suicides and disappearances of a number of aristocratic young ladies. The only clue: a clockwork scarab. The scarab leads our capable heroines into a secret society of Egyptian goddess worship, where a stolen goddess statue apparently has supernatural powers and a villain worthy of Moriarty – the Ankh – is mystery and danger personified.

RELATED: Throwing Steampunk and Gothic Romance into a Blender: A Guest Post by Kristen Brand

Evaline and Mina are in many ways opposites. Evaline is a conventional beauty, well versed in social graces, surrounded and supported by a loving family, and incredibly strong. Mina is lanky and gangly and clumsy and awkward, the inheritor of the Holmes’ nose, in all its beak-like glory. Her family seems to have forgotten her – her mother is gone, her father never home and her uncle always busy.

Evaline is impetuous, wants to tackle problems head on with might and brawn and itches for a good fight. Mina, meanwhile, wants to think about it, make plans, be sure, test, hypothesize, experiment. They both lack confidence in their abilities, and the book follows the development of a budding partnership and complementing friendship, which has the potential to change them both.

RELATED: YA Book Review: Lady of Devices by Shelley Adina

A Little Love into the Mix

Thrown into the mix are some possible love interests for our heroines. Dylan is a young man, who has somehow been transported via the goddess statue from his time in our modern day to this alternate steampunk historical reality in 1889. He and his cellphone fascinate Mina.

Pix, on the other hand, is alluring mischief himself, a shadowy, mysterious figure, who has the ability to sneak up on the vampire hunter – even with her heightened senses – and continually surprise her, challenge her and even save her on occasion.

And then there’s Ambrose Grayling, a young, ambitious police inspector with enough going on upstairs to spar convincingly and consistently with the formidable Miss Holmes.

RELATED: YA Review: Rook is A Rip-Roaring Romance!

The story certainly has the potential for an adaptation to the small or large screens. Although to do this fantastical world justice, filmmakers would need a substantial budget attached to such an endeavor.

Content Note: There are descriptions of some seedier activities and some unsavory characters. There are also multiple murders with their requisite corpses – this is a crime novel after all – but there is no graphic content or explicit language.

Our romance-themed entertainment site is on a mission to help you find the best period dramas, romance movies, TV shows, and books. Other topics include Jane Austen, Classic Hollywood, TV Couples, Fairy Tales, Romantic Living, Romanticism, and more. We’re damsels not in distress fighting for the all-new optimistic Romantic Revolution. Join us and subscribe. For more information, see our About, Old-Fashioned Romance 101, Modern Romanticism 101, and Romantic Living 101.
Pin this article to read later! And make sure to follow us on Pinterest.
By Jessica Jørgensen on May 8th, 2017