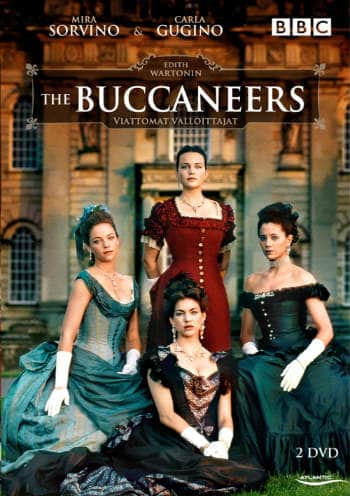 The first time I saw this, I’d been given an idea of what this miniseries was like and it may have affected my original opinion. Since then, I’ve seen it a time or two more, and only just now re-watched it for the first time in a handful of years. With each viewing, the story charms me as much as its four protagonists were by their European season, which is what the story essentially boils down to – four American women embarking on a London season. However, the film first opens on American shores in the 1800s.

With each viewing, the story charms me as much as its four protagonists were by their European season.

The beautiful and unconventional Conchita (Mira Sorvino) is the first of their foursome to marry, and she does so in style. She marries into one of England’s most prominent families to a man named Richard. In America, however, families believe it is the husband’s duty to provide for his wife and much to Richard’s parents dismay, Conchita’s stepfather settles no dowry on her. This isn’t the case for the St. George family. Among the new wealth, the St. George sisters have no proper society welcoming them, but their father has made a bundle and is ranked as Wall Street’s third richest. Eldest Virginia (Alison Elliott) – or Ginny as she is called, is beautiful, but cold and noticeably proper. Youngest Annabelle, who is called Nan (Carla Gugino) is still quite the child and in need of guidance, which her mother remedies by hiring an English governess, Miss Testvalley (Cheri Lunghi). Finally, there is Lizzy Elmsworth (Rya Kihlstedt). Quiet and stylish, Lizzie has no grand ambitions for her London adventure beyond reuniting with her friends. 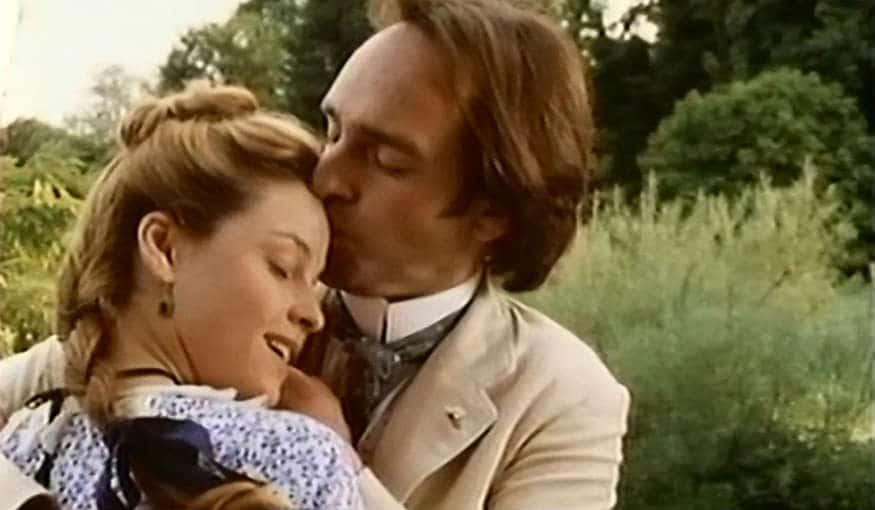 Their season is filled with tragedy and triumph, romance and heartbreak as their respective lives pull them in new directions and each girl, once filled with such promise and laughter, discovers what it means to conform to the perfect Englishwoman.

Dated though the filmmaking may be for some viewers, the story that unveils within these five parts is still a diverting one. The cast is quite good as is the pretty settings and costume ensembles. If there is a major failing to the production, it’d be the rapidly ill-explained lapses of time and the filmmaking, which sadly suffers from being an early 90s production. Too often the camera zooms in on the characters’ faces, which is meant to capture stripped emotions, but it lacks this effect. Then there are the missing chunks of time. While I was always able to follow what was going on and happening, it does seem like the series jumps around a bit too much for its own good and oftentimes the transitions aren’t always the smoothest, particularly once the girls are married off. The story breaks off from being an ensemble piece and becomes more a series of vignettes. Still, that’s really the only complaints I’d remark on. Everything else is really quite cute though the crescendo does wind up being a progressively darker, and even a bit sinister, story. 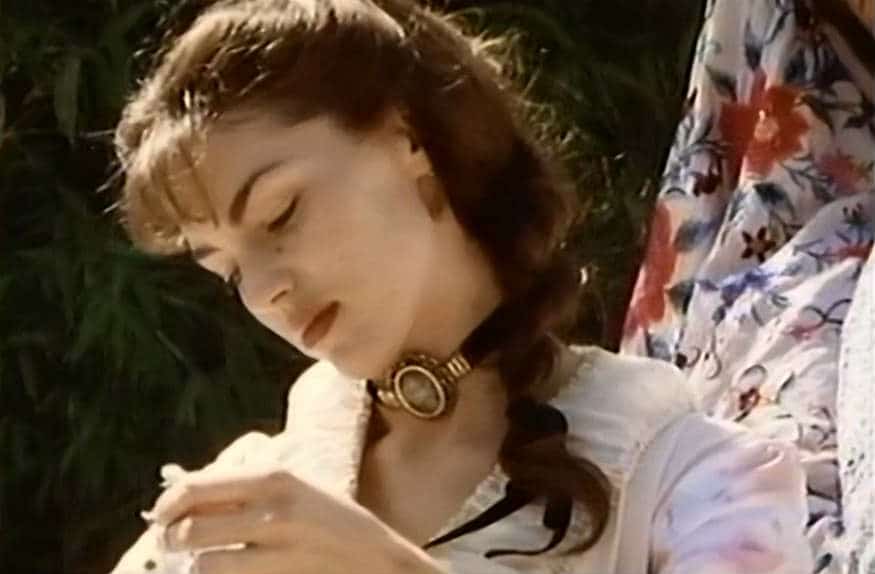 Ironically, the story I liked best (which is the one that has the happiest of endings) is what gets the least screen time. Essentially, it’s Nan whose story has the most time and effort put into it. Though each of the leading ladies depicts their characters admirably well. They portray the innocence of their early lives with enthusiasm and charm and mature their respective characters flawlessly. Not to be lost among the luminous female cast, this BBC production also boasts a cast of talented British men including Michael Kitchen, Greg Wise, and James Frain. Call the Midwife’s Jenny Agutter also co-stars among some of these familiar names.

Based on the final, and more to the point, unfinished novel by Edith Warton (The Age of Innocence), I cannot speak to this as an adaptation. However, when thinking of it akin to that of a soapy period drama, I must confess I really enjoy The Buccaneers. Doing a bit of cursory research reveals the script did reduce the characters to four women, down one (an insignificant change in my opinion) and a few absent characters. The BBC also took serious criticism for “sensationalism” and making its ending drastically happier. It’s markedly different than Warton’s usual fare in that it’s mostly a happy riding-off-into-the-sunset (literally) kind of end. Wharton scholar Marion Mainwaring penned in a book that Wharton identified most with Nan, seeing herself at that age as poetic, imaginative and unconventional. Consequently, she couldn’t resist giving herself a happy ending. (This according to an article written back in September 1995 on Current.org.) 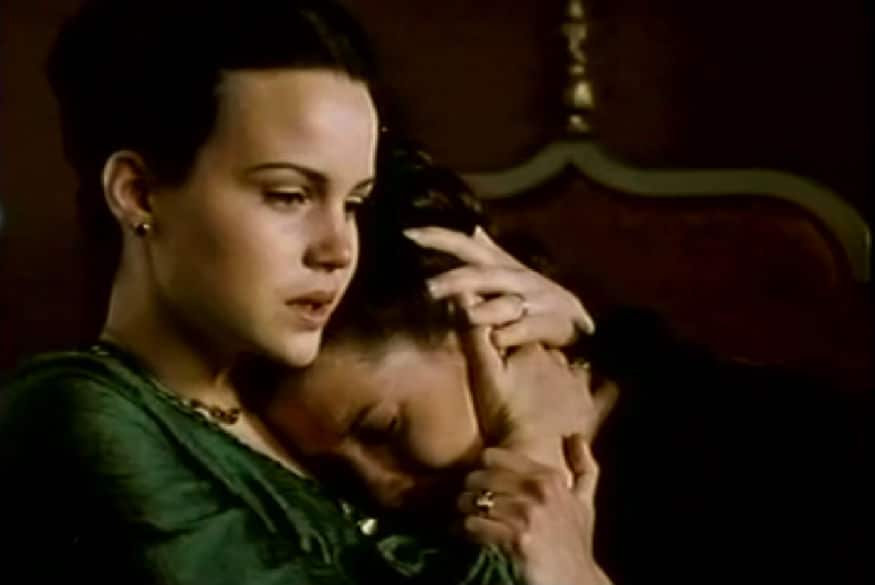 In conclusion, everything I most love about the genre is contained in the lives of these women’s grand stories. There are plenty of beautiful estates, parties and costuming coupled with an array of stories to become lost in. Not to be forgotten is the passionate romance and even politics creeping into the stories. However, not everyone gets their perfect ending, but I liked where the characters are left. There is much to smile about at the end of the series even if we do feel of sense of bittersweetness mingling with that.

Content note: The majority of this series could be rated TV-PG, though there are one or two scenes (including a marital rape and extra-marital affairs, both on and off-screen) that bump the series up to its official TV-14 rating.

The Buccaneers can currently be found on Netflix. It’s also available on DVD and on Hulu under its subscriber service.

Have you seen this 90s period drama? Let me know your thoughts down below.

Our romance-themed entertainment site is on a mission to help you find the best period dramas, romance movies, TV shows, and books. Other topics include Jane Austen, Classic Hollywood, TV Couples, Fairy Tales, Romantic Living, Romanticism, and more. We’re damsels not in distress fighting for the all-new optimistic Romantic Revolution. Join us and subscribe. For more information, see our About, Old-Fashioned Romance 101, Modern Romanticism 101, and Romantic Living 101.
Pin this article to read later! And make sure to follow us on Pinterest.
By Rissi JC on September 11th, 2015