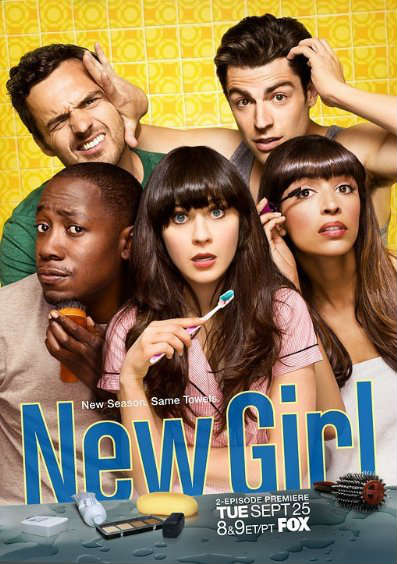 In case your memory is a little rusty, at the end of the second season, Cece had abandoned her own wedding, proclaiming her love for Schmidt, and causing the new dilemma of whether Schmidt will choose Cece or Elizabeth, his old college girlfriend. Jess and Nick finally decided after a mini-break up that they would give their relationship a chance.

At the beginning of season three, we had both the antics of Schmidt and the now officially together Jess and Nick for entertainment. I have to say, only Jess and Nick would run away to Mexico to escape their roommates. And, of course, Schmidt chickened out and is now juggling dating both Cece and Elizabeth. Craziness ensues, Nick ends up in “jail” in Mexico, we discover Winston is colorblind, and much much more.

In case you haven’t watched it, I don’t want to give too much away. I would, however, highly suggest hauling yourself to a computer and checking it out on FOX’s website if you haven’t. You can keep up with the romantic adventures of this quirky lot every Tuesday at 8pm on FOX.

Now that you’ve watched it, what did you think of New Girl’s premiere? Do you think Jess and Nick will make it as a couple? Who would you rather see Schmidt with; Cece or Elizabeth? Sound off below…

Our romance-themed entertainment site is on a mission to help you find the best period dramas, romance movies, TV shows, and books. Other topics include Jane Austen, Classic Hollywood, TV Couples, Fairy Tales, Romantic Living, Romanticism, and more. We’re damsels not in distress fighting for the all-new optimistic Romantic Revolution. Join us and subscribe. For more information, see our About, Old-Fashioned Romance 101, Modern Romanticism 101, and Romantic Living 101.
By Rebecca Lane on September 17th, 2013