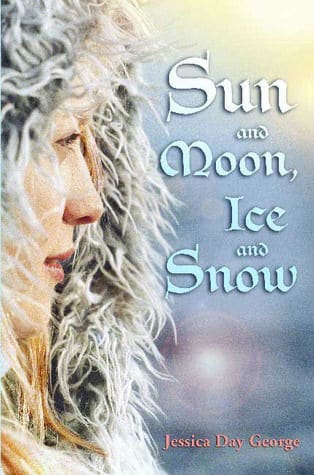 Sun and Moon, Ice and Snow YA Book Review

I love a good fairy tale adaptation, and like many other people, I have favorite fairy tales. Jessica Day George’s Young Adult novel,  Sun and Moon, Ice and Snow is one of these stories. Based on the fairy tales “East of the Sun and West of the Moon,” and “White Bear King Valemon,” Sun and Moon, Ice and Snow is the story of a girl who finds herself trying to break a curse and save her love from a troll princess.

RELATED “Is the Pasta Done Yet?” An Interview with Jessica Day George

Our heroine is the youngest of nine children. Her mother is so disappointed that her ninth child is a girl that she never names her, calling her pika (girl). However, when the pika’s brother Hans Peter returns from a long voyage, things change. He calls her Lass and seems to have suffered something terrible on his voyage. When Lass helps the mysterious White Reindeer, it grants her one wish. Lass wishes to heal her brother and is shocked to learn that trolls were involved in what happened to him.

The Reindeer, unable to heal Hans Peter, gives Lass the other thing she wants most, a name. However, she decides to keep this a secret for now. She also is suddenly able to speak to animals, which will come in handy on her quest. And because of this meeting with the White Reindeer, Lass begins to piece together information about Hans Peter’s mysterious voyage.

Lass grows older, and Hans Peter teaches her the writings of a strange language. When a white bear appears in the neighborhood, he tells Lass that he needs her to live with him in a palace for one year. Hans Peter tries to stop her, but Lass goes with the bear to a castle of ice and snow and meets a host of strange creatures. She also sees strange carvings in the castle that are like the ones Hans Peter taught her. They are in troll language. As she translates them, she realizes that her brother might know more about trolls than she thought. And Rollo, her pet wolf, thinks that the snow walls smell like death.

Lass realizes that there is a curse on the castle, and as she begins to try to piece together the puzzle she has been brought to solve, she discovers that someone is sleeping with her in her room at night. After a visit home, a nervous Lass lets her sister convince her to look at the face of her mysterious roommate. When she does, it turns out he’s a handsome prince and now he has to marry the troll princess in the castle east of the sun and west of the moon. Lass sets out on a journey to save him, following in the footsteps of another brave lass and taking her on an adventure she never expected. And when she arrives at the castle east of the sun and west of the moon, she will need to use all her cunning and love to save her prince.

What happened to Hans Peter?  Can Lass save the White Bear? What secrets lie in the castle of snow and ice? How do you get east of the sun and west of the moon? And what is our heroine’s real name? All these questions and more will be answered in Sun and Moon, Ice and Snow.

If you loved East by Edith Pattou or the film The Polar Bear King, you will probably love Sun and Moon, Ice and Snow. The source material is basically the same as those two stories, but the end result is something wonderful all its own.

Jessica Day George has a style of writing that is descriptive without being overwhelming, with a great balance of subtle humor and seriousness.  George also knows just how much to reveal and when to do so. This keeps readers hooked from start to finish. The use of Norwegian also helps make the story come alive, even though it’s about trolls and people turning into bears.

Lass is an engaging and wonderful character. It can be hard to relate to a character without a name, but Lass doesn’t fall into that trap. She never seems like a cookie-cutter heroine. She’s good and kind, but she’s also stubborn. She refuses to give up, even when all hope is lost, and fights for the people she cares about. Lass is smart and cunning, but she also doubts herself. Altogether, this makes her feel more real.

The other characters are also fun, although we spend less time with them since we see the other characters through Lass’s eyes. Rollo the wolf provides a sounding-board for Lass’s ideas, but we only know what he tells her. The best and worst thing about only following Lass and her thoughts is that we only know what Lass knows. We get information about stories as she does. This can be frustrating at times, but it also makes the story unfold in a more suspenseful way.

The only thing that I did not like was that I wanted more information on the White Reindeer.  I also wanted a short story on Hans Peter, but that might just be me.

There are two separate romances in the book. One takes its time to develop throughout the novel and the other developed offscreen. I liked this because it gave some variety to the story. Even though Lass and the Bear are the main romance, the other love story was just as beautiful and sweet, while also being very different.

You may piece together the mystery before Lass and Rollo do, but it’s still a treat to watch it unfold in the hands of a talented author like Jessica Day George. This book quickly became one of my favorite fairytale adaptations. If you like fairy tales, you might enjoy this book. If you loved East by Edith Pattou or the film The Polar Bear King, you will probably love Sun and Moon, Ice and Snow. The source material is basically the same as those two stories, but the end result is something wonderful all its own.

Have you read Sun and Moon, Ice and Snow? What are your thoughts on this fairytale retelling? Let me know in the comments!

Our romance-themed entertainment site is on a mission to help you find the best period dramas, romance movies, TV shows, and books. Other topics include Jane Austen, Classic Hollywood, TV Couples, Fairy Tales, Romantic Living, Romanticism, and more. We’re damsels not in distress fighting for the all-new optimistic Romantic Revolution. Join us and subscribe. For more information, see our About, Old-Fashioned Romance 101, Modern Romanticism 101, and Romantic Living 101.
Pin this article to read later! And make sure to follow us on Pinterest.
By Bailey Cavender on January 13th, 2017