(I received a free copy of Speakeasy from the publisher, St. Martin’s Press, to write an honest review on The Silver Petticoat Review. I was not financially compensated for this post and all opinions are my own.) 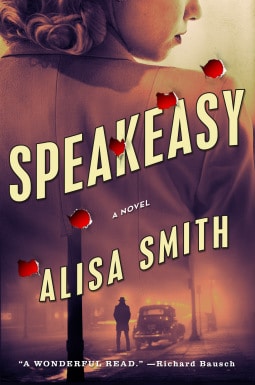 Official Synopsis of Speakeasy: Thirty-year-old Lena Stillman is living a perfectly respectable life when a shocking newspaper headline calls up her past: it concerns her former lover, charismatic bank robber Bill Bagley. A romantic and charming figure, Lena had tried to forget him by resuming her linguistic studies, which led to her recruitment as a Navy code-breaker intercepting Japanese messages during World War II.

But can Lena keep her own secrets? Threatening notes and the appearance of an old diary that recalls her gangster days are poised to upset her new life.

Whom can she really trust? Is there a spy among the code-breakers? And who is it that wants her dead?

Speakeasy is an ambitious, historical novel. The title alone evokes images of a bygone era. A time when people with diverse backgrounds whispered of illegal bars where one could get a drink. Bars with music and dancing, a secret society away from prying eyes. What Speakeasy has going for it is the time period; or rather, two time periods. First, there is the confusion and desperation of the Great Depression and Prohibition. Think Bonnie and Clyde, The Public Enemy, or The Untouchables. Second, the heightened emotions of World War II. A time romanticized in movies like Casablanca, From Here to Eternity, or The English Patient.

Needless to say, there is so much to capture and the author does a fine job of imbuing her scenes with the conflicting emotions of the 1940s as well as the devil-may-care spirit of Prohibition. Speakeasy begins promising enough but unfortunately, quickly loses steam. The book lacks a cohesive story. To be fair, there are moments of fantastic writing; passages of intricate detail that draw you in. Yet, these moments are few and far between and are not enough to carry the book to its end. Simply put, the framework for an incredible story is there; however, the execution fails.

Speakeasy begins just before the Japanese bombed Pearl Harbor. It takes place primarily in Canada with a few stops on the West Coast. The story is in the first person. Lena introduces herself without a lot of fanfare. She portrays herself as calm and capable. That is until the past comes roaring to her present. Now, her previous life as a criminal could undo everything, including her new career as a Navy code breaker. Unfortunately, Lena quickly becomes a nervous, fearful woman. I often thought she wanted someone to save her. Despite things picking up towards the end, she never really recovers from that characterization.

The flashbacks take place in the early 1930s. They tell the story of how Lena came to join a gang of bank robbers and fell for their leader, Bill Bagley. Oddly, the flashbacks are from the perspective of another character, Byron Godfrey.  Nicknamed ‘By God’ by Bill, he was also a member of the gang. It makes for jarring transitions between the past and present. The story of Lena and Bill’s romance is primarily from Byron’s perspective. Thus, their romance is skewed due to Byron’s own wants and desires. However, what I did like about Byron’s perspective was the honesty. Byron holds nothing back, even as it relates to his own motives.

While there is an enormous amount of potential in Speakeasy, it never quite gets its footing. The plot was lost in a multitude of action scenes with painstaking detail. However, fans of 1930s bank heists and World War II history will enjoy (the well-researched history was truly the best part of the story) the descriptions. While I struggled through this book, I did enjoy the imagery. Author Alisa Smith conjured detailed settings for her characters. As a result, I think Speakeasy would do better on the screen. With just a bit of revision, Speakeasy could be an interesting romantic limited series or made-for-TV movie.

Content Warning: There is cursing and sexual innuendo. Otherwise, a clean read.

Speakeasy will be available to purchase April 10, 2018.

Our romance-themed entertainment site is on a mission to help you find the best period dramas, romance movies, TV shows, and books. Other topics include Jane Austen, Classic Hollywood, TV Couples, Fairy Tales, Romantic Living, Romanticism, and more. We’re damsels not in distress fighting for the all-new optimistic Romantic Revolution. Join us and subscribe. For more information, see our About, Old-Fashioned Romance 101, Modern Romanticism 101, and Romantic Living 101.
By Catherine on March 15th, 2018