Sneak peek of Jessica Dotta’s debut novel Born of Persuasion from the Price of Privilege Trilogy. 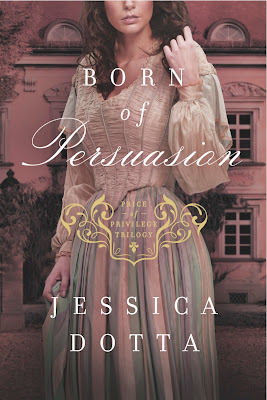 “The year is 1838, and seventeen-year-old Julia Elliston’s position has never been more fragile. Orphaned and unmarried in a time when women are legal property of their fathers, husbands, and guardians, she finds herself at the mercy of an anonymous guardian who plans to establish her as a servant in far-off Scotland.

With two months to devise a better plan, Julia’s first choice to marry her childhood sweetheart is denied. But when a titled dowager offers to introduce Julia into society, a realm of possibilities opens. However, treachery and deception are as much a part of Victorian society as titles and decorum, and Julia quickly discovers her present is deeply entangled with her mother’s mysterious past. Before she knows what’s happening, Julia finds herself a pawn in a deadly game between two of the country’s most powerful men. With no laws to protect her, she must unravel the secrets on her own. But sometimes truth is elusive and knowledge is deadly.”

“I am quite vexed with you.” Mrs. Windham placed a slice of lard cake on a plate. She eyed my dress hanging loosely over my frame, then added another sliver alongside a gooseberry tart. “Why did you not tell us your mother was ailing? Had I knowledge, I would have visited before she passed; indeed, I would have.”

My hand faltered as I reached for the plate. While I’d known the topic of Mama’s death was unavoidable, I had not expected it so soon.

“Mama.” Elizabeth cast her mother a disapproving look over the rim of her teacup. “You can scarcely blame Julia for it.”

“Blame Julia?” Mrs. Windham dabbed her eyes with the corner of her gardening apron. “What a notion, child.” Then to me, “Did she linger in much pain? Did she send me remembrances? Did she call for me in her deep despair?”

Tightness gathered in my chest as I sought for an explanation, knowing full well the Windhams wouldn’t be fooled into believing Mama had pined herself into an early grave over my father’s death. I placed the plate on my lap, then set about tearing the cake into bite-sized pieces. “She called for no one. The cholera took her quickly.”

Elizabeth froze, midsip, as if detecting my lie. Mrs. Windham frowned, but I wasn’t certain whether she sensed deception or simply disliked being robbed of the notion that Mama had died crying out for her.

Mrs. Windham turned toward the window, pressing her lace handkerchief against her mouth. “Well, if you’re going to try to spare me, I am sure there is nothing I can do.” Her voice trembled. “I have lost my dearest friend, but why should anyone consider me?”

A long silence ensued, during which Elizabeth frowned and I twisted my cup in its saucer. We both knew trying to start a new conversation would be useless until her mother had been properly indulged.

After a minute, Mrs. Windham’s mouth puckered. “Humph. Well, do not think yourself cleared on all accounts. I am even more outraged you agreed to have this . . . this guardian. I scarcely believed my own ears when I heard the tidings. Nothing, no, nothing, could have made me believe you would choose this person over me. Whatever are you thinking?”

I tore the cake into yet smaller pieces.

Elizabeth darted an apologetic look at me, wrapping her hands about her cup. “Mama, you can scarcely blame Julia for whom her parents selected as her guardian.”

“What else am I to think? Especially when Lucy wrote me a mere month before her death begging me to care for Julia should this very thing happen. Well, all I can say is that Julia has certainly made it clear whom she prefers. Surely this person has no tie, no claim over you. I never heard of such an odd thing in all my life. Not give a name, indeed! And that man who came. That rude man! Is it so unreasonable to assume your guardian would have taken it into account that I have a daughter, and as such made allowances? See if I merit approval. Of all the insults.” She snorted into her half-empty cup.

I shot Elizabeth a questioning look. She’d not written anything about my guardian sending someone to Am Meer. Instead of meeting my eyes, her gaze drifted to the open windows.

“I never met such a rude man as that Simon.” Looking at my untouched food, Mrs. Windham fluttered her handkerchief at it. “Indeed, I wish we’d begun dining amongst higher spheres before I listed our acquaintances. That would have swept the smug look off that Simon’s face.”

Elizabeth let out a short sigh. “His name was Simmons, not Simon.”

“I think I should remember better than you, missy. I tell you it was Simon, and I cannot imagine a more disdainful or trying butler.”

“Butler?” I asked, more perplexed than ever. “Are you saying my guardian’s butler came here?”

“He was no butler; trust me,” Elizabeth said. “He dressed the part of a gentleman. I think he was a solicitor.”

“You can hardly expect a butler to wear his black tie when travelling. Take my word, the man is a servant, one who holds much too high an opinion of himself.”

“But, Mama, think upon it. What sort of person sends a servant to make those types of inquiries? Who would run the household during his absence?”

“Are you never to tell me of what you are speaking?” I finally said. “What does this man and his lists of acquaintances have to do with my guardian?”

Elizabeth gave her mother a look that plainly asked if she was satisfied now that I was upset. “Well, we were not supposed to mention the visit.” She glared a second longer at her mother. “Three months ago he arrived, stating he’d come to make certain Mama was a suitable chaperone for a visit.”

“Very rude, he was, too. I should not have thought there was such a rude man in all of England.”

Elizabeth took a sharp, annoyed intake of breath. “He gathered the names of all our acquaintances—”

“He dared to ask what we required as compensation for keeping you here for a month or two. The very idea, expecting to be reimbursed for keeping Lucy’s child! He made it sound as though you were living on—” Mrs. Windham stopped suddenly and eyed the patch on my threadbare dress. The tinkling of the wind chimes was the only sound filling the space for a half minute.

“I heard nothing about this visit,” I said, forcing an even tone. “Pray, did he happen to mention the name of my guardian?”

“No, indeed. This is all very strange.” Mrs. Windham spooned more sugar into her tea. “I think your guardian must be very ill-mannered. What sense can there be in keeping one’s identity hidden, I ask?”

She paused, eyeing me for all she was worth. But I had no suitable answer. I no longer even wanted to know about the man who’d been sent here. His visit only increased my unease, making it harder for me to find the nerve to do what I must. If I succeeded in accomplishing my goal, then this Simon or Simmons person mattered little.

“A soft knock on the door interrupted us.

“Yes?” Mrs. Windham sank back into her chair, glaring. “What now?”

“I beg pardon.” Their stout housekeeper managed to open the door and curtsy at the same time. “Only the room’s ready, and Miss Lizbeth asked me to come fetch her.”

“Thank you, Hannah.” With undisguised relief, Elizabeth stood. “Mama, poor Julia must be exhausted. Surely you will excuse her.”

Mrs. Windham waved me away with her handkerchief. “I have no wish to talk further regardless, what with her upsetting the household. My poor heart is pounding after such a distasteful tea. When you wake, I insist you write your guardian. Tell him this whole affair upsets my digestion, and that you wish to be transferred into my care. For I cannot conceive he wishes such vexations upon me. And—”

“What shall we do about a lady’s maid for Julia?” Elizabeth had the mercy to interrupt. “Betsy scarcely has time in the mornings to arrange our toilette, much less someone else’s. What about that girl Nancy?”

“Yes, yes, anyone will do,” agreed Mrs. Windham, picking up her teacup. “I am quite certain Julia shall not mind.”

Born of Persuasion will be released on September 1st, 2013.

For our full thoughts on the book, read  Autumn’s Review.

To order Born of Persuasion you can go to the Amazon page here:

Our romance-themed entertainment site is on a mission to help you find the best period dramas, romance movies, TV shows, and books. Other topics include Jane Austen, Classic Hollywood, TV Couples, Fairy Tales, Romantic Living, Romanticism, and more. We’re damsels not in distress fighting for the all-new optimistic Romantic Revolution. Join us and subscribe. For more information, see our About, Old-Fashioned Romance 101, Modern Romanticism 101, and Romantic Living 101.
Pin this article to read later! And make sure to follow us on Pinterest.
By Amber Topping on August 9th, 2013