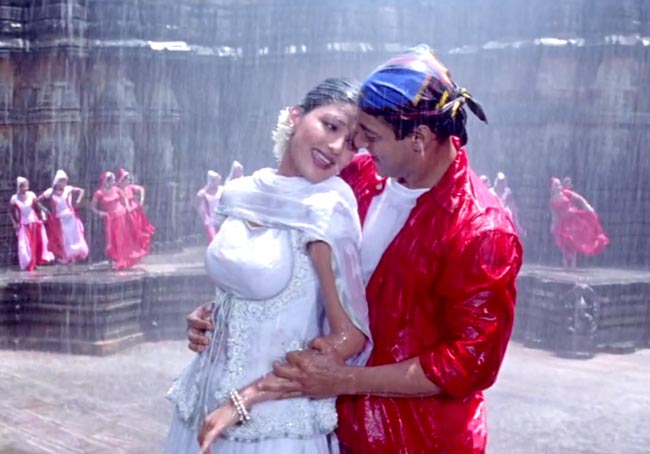 Ahh Netflix, my old haunting grounds. I know that many of us (…meaning me) have spent a good deal of time perusing the Netflix website seeking out shows and movies to watch. It’s here that I encountered Bollywood and my love for gorgeous costumes, huge song-and-dance numbers, and unapologetically sweet romantic films emerged. If you’re looking for something new, here’s a list of romantic movies that I enjoyed on our kindred friend Netflix.

Shruti Kakkar is a goal-orientated young woman working on her dream of being a wedding planner. Bittoo Sharma will do anything to not return to his family’s farm to work and jumps at a chance to work with Shruti, despite her initial dislike of him. They slowly grow their business organizing small weddings and becoming strong friends. But when Shruti realizes she has feelings for Bittoo, their relationship and work becomes difficult as Bittoo doesn’t seem to feel the same way.

This is a feel-good, easygoing rom-com that’s cute and cheesy. The leads are adorable and the music is entertaining and fun.

Simran Singh goes on a trip to Europe and meets Raj Malhotra, a flirty, playful young man. They bicker, tease and slowly fall in love on the long train journey through beautiful Switzerland. But Simran’s betrothed to another man and returns to India thinking that she’ll never be with Raj. But Raj shows up in India, intent on somehow winning Simran’s family over before he loses her forever.

While at times melodramatic, DDLJ is still another feel-good film as true love conquers despite impossible odds. A young Shah Rukh Khan and Kajol are terrific here and sell epic, star-crossed romance effortlessly.

A story of a family through their joy, laughter and moments of tears, specifically of the three sons who all fall in love – the eldest with an arranged marriage, the second finally gets the nerve to show the girl he likes his feelings for her, and the youngest teases and bickers with a spunky girl.

Hum Saath-Saath Hain is a much slower film with little drama until the very ending. What I enjoyed about the film was really the music and watching the three boys have their brief romantic moments with their respective love interests. This family is ridiculously perfect and I love that. Overall, the film is very sweet and innocent.

A huge hit in India, Kabhi Khushi Kahbie Gham is the epic story of two brothers and a broken family finally reunited. The story follows the eldest adopted brother, Rahul, who marries a girl against his father’s wishes and is thrown out of the family. Ten years later, younger brother Rohan seeks out Rahul in an attempt to reconcile their family and falls in love as well.

K3G is one of my favorite Bollywood films! Boasting a great cast – Shah Rukh Khan, Kajol, Hrithik Roshan, and more – we have an emotional, grand tale of love, rejection, forgiveness and ultimately family. K3G has some of my favorite songs, including Bole Chudiyan and Yeh Ladka Hai Allah. As usual for Bollywood, the costumes and cinematic look of the film are beautiful. This is my favorite SRK-Kajol film and my favorite of their romances. Though the story does stray on the melodramatic, it’s balanced out with many light-hearted and funnier scenes.

Kush has been given a simple assignment – find a girl for his older brother Luv to marry and settle down with. Kush eventually finds Dimple, a girl he’d known years ago in school. Dimple and Luv agree to the arranged marriage. But the more Kush and Dimple spend time together, the more they realize they’re in love. Can these two friends put their heads together to figure a way out of this crazy mess?

Mere Brother Ki Dulhan is what a rom-com should be; silly and sweet, with the right amount of cute and cheesy. A lot of hilarity ensues as Kush and Dimple create an elaborate plan to get Luv to back out of the marriage without anyone finding out the truth. Lead Imran Khan is adorable here and easy to root for.

Suri and Taani marry in an arranged marriage. Suri’s older and aware that Taani has no feelings for him. After learning that Taani wants to enter a dance competition, Suri secretly learns to dance and gets a disguise so that he can help Taani win the dancing contest. Slowly, Taani’s heart opens up to this caring guy who wants her to succeed at her dreams – she just has no idea that he’s Suri.

Starring Shah Rukh Kahn (once again, hehe), this is one of those sweet and moving love stories that make the romantics-at-heart smile from ear-to-ear. Yes, you do have to stretch your disbelief a bit, but no more than watching Lois Lane and Superman. The film is sweet and at times understated and quiet, but overall the build-up is lovely and I was very happy with the climax and how everything came together. SRK, you did it again!

Our romance-themed entertainment site is on a mission to help you find the best period dramas, romance movies, TV shows, and books. Other topics include Jane Austen, Classic Hollywood, TV Couples, Fairy Tales, Romantic Living, Romanticism, and more. We’re damsels not in distress fighting for the all-new optimistic Romantic Revolution. Join us and subscribe. For more information, see our About, Old-Fashioned Romance 101, Modern Romanticism 101, and Romantic Living 101.
Pin this article to read later! And make sure to follow us on Pinterest.
By Faith White on February 21st, 2016