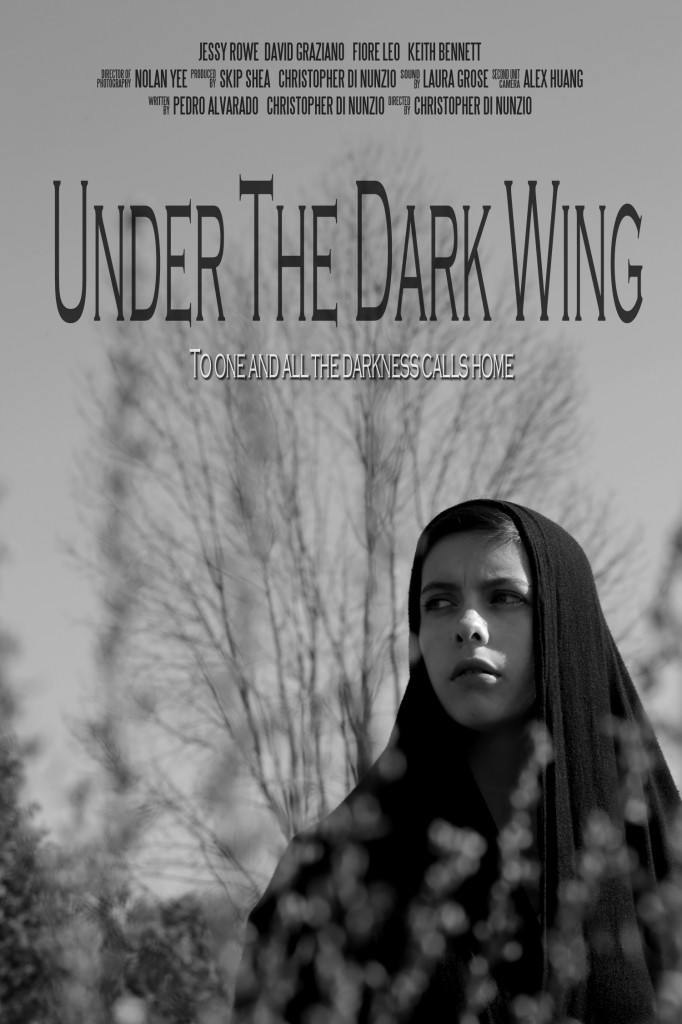 Recently I took the time to check out the short, Under the Dark Wing by the talented independent filmmaker Christopher Di Nunzio. With an intriguing premise, gorgeous black and white cinematography and a good cast, Under the Dark Wing is an entertaining 15 minute excursion. However, despite all the promise, the film does not always reach up to its full potential.

Under the Dark Wing tells the story of a low level thug, Johnny Boy who fails to murder a witness and has to explain why to his mafia like boss (who we are introduced to as he eats his meal in a disgusting way as he sucks the meat off the bones in a nice close up shot to reveal his gluttony and corruption), that he was unable to kill his mark because he crossed paths with a young girl with supernatural abilities. Naturally, his boss George isn’t particularly thrilled (not to mention doesn’t believe Johnny Boy’s wild tale) and sends another hit man after the girl. With nice twists and turns and elements of a mafia crime drama, horror, the supernatural and even a possible religious angle, Under the Dark Wing is never dull. The mystery of who this girl is intrigues from start to finish.

One of the standouts about this 15 minute short was the cinematography. Filmed in black and white, each shot looked gorgeous. Not to mention how the types of shots chosen revealed the inner workings of the characters as well as perfectly setting the mood of each scene. On top of that, the costumes, even though modern, were wonderfully chosen to match the characters, the settings, and even the shots making for even more beautiful images.

I also enjoyed the performances from the actors, even if they weren’t extremely memorable. David Graziano did a fine job as the mafia boss with a throwback performance to past crime films; Fiore Leo as Johnny Boy played the role with a nice bit of vulnerability; and Jessy Rowe as the young girl gave a strong, mysterious performance.

The script, however, did need a little more work. While the story was very good about a supernatural girl crossing paths with the mafia, the dialogue didn’t always work. At times it felt unnatural and forced. Perhaps the dialogue was meant to have an “unreal” quality to it, but I don’t think it quite came across if that was the intent. A couple more rewrites would have fixed this problem.

Overall, I enjoyed the short and believe that Christopher Di Nunzio has a lot of promise and will only continue to improve with each film. His clear knowledge of filmmaking and obvious love for the craft shines in Under the Dark Wing (an AMAZING title choice) and I look forward to seeing him reach his full potential in future projects.

Content Note: While unrated, there is adult material in this short film.

You can learn more about Under the Dark Wing on Facebook: https://www.facebook.com/UnderTheDarkWing

Cast:
Jessy Rowe as The Girl
David Graziano as George
Fiore Leo as Johnny Boy
Keith Bennett as The Thug

Our romance-themed entertainment site is on a mission to help you find the best period dramas, romance movies, TV shows, and books. Other topics include Jane Austen, Classic Hollywood, TV Couples, Fairy Tales, Romantic Living, Romanticism, and more. We’re damsels not in distress fighting for the all-new optimistic Romantic Revolution. Join us and subscribe. For more information, see our About, Old-Fashioned Romance 101, Modern Romanticism 101, and Romantic Living 101.
Pin this article to read later! And make sure to follow us on Pinterest.
By Amber Topping on April 25th, 2014