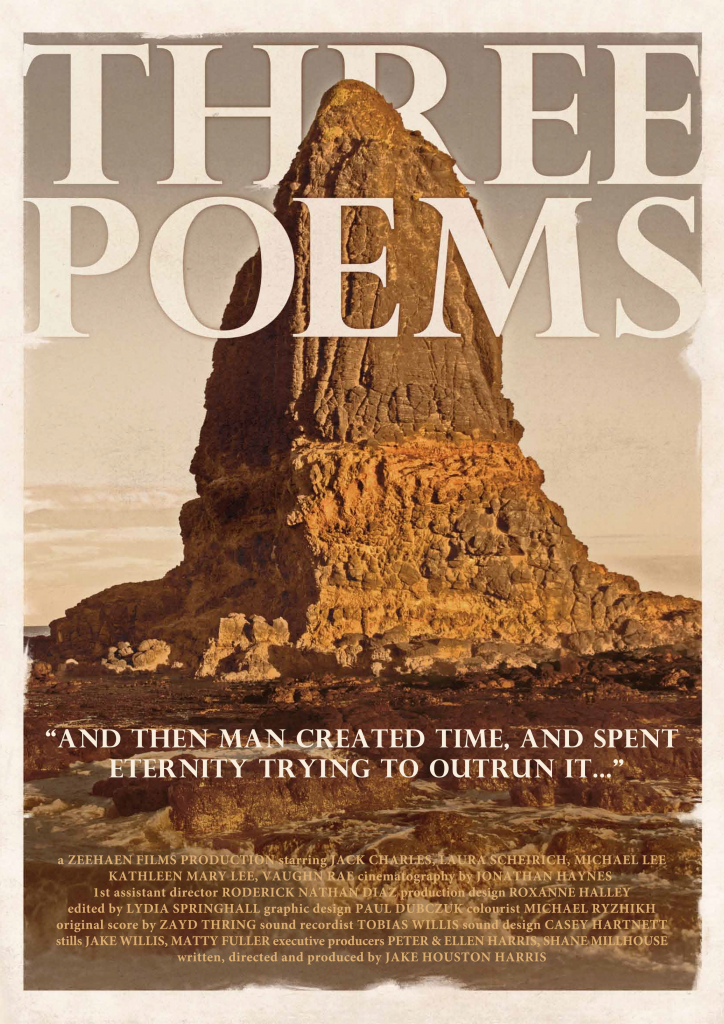 “And then man created time, and then spent eternity trying to outrun it.”

This thought-provoking opening line sets the tone for the entire film which keeps you mesmerized from start to finish. Three Poems, the directing debut of Jake Houston Harris, is a surrealist piece of splendor.

The film transitions between three different stories told through three different poems. There’s no dialogue in this film; only voiceovers. These poetic voiceovers are matched with beautiful, haunting images that will leave you thinking about it long after it’s over. This short film is nothing if not poetic.

The first poem “That Ominous Water” was my personal favorite, if only because it reminded me of “The Lady of Shalott.” The first visual image we see is the gentle flow of water, a river or a lake. Then the camera pans down to a canoe. Is it empty? Or is someone inside? Soon we see a young woman lying in the canoe, pale, wearing white, almost as if a ghost. She appears broken, desperate, depressed. She tugs on a rope, only to find a noose at the end, the lack of hope she feels felt not only by her but by the audience as well.

The second poem “Rose Arcadia” is strange, abstract and almost disturbing as we watch what appears to be a couple lying on the ground burying each other in dirt and soil. At first I wondered if the woman was dead and he had murdered her, the shots ambiguous and the entire picture hidden. But then the story continued to unfold and the woman gasped for air, telling the audience she was in fact alive. They continued to pour dirt on each other with tiny shovels, their story perhaps about the distance that builds between two people in a relationship.

The final poem, “The Grey,” was the most emotionally powerful as two older men have a standoff (one white and one black – this even pointed out in the voiceover), or a stare down like two cowboys in the Old West ready for a duel. But this is an emotional one, rather than a violent one. Clearly this third poem is meant to be a statement on Australian relations between races, but it can resonate with anyone anywhere. It’s a universal message, one that leaves an emotional punch.

One of the strengths of this short is the writing. Jake Houston Harris crafted beautiful voiceovers with language both haunting and powerful. Overall, I find Three Poems to be a beautiful short film that should be watched not only more than once, but a few times to let each deeply profound story sink into your psyche. No doubt, Jake Houston Harris is a future visionary to watch out for.

Three Poems will be available to watch at the Viewster Online Film Festival through till the 26th of June, 2014. Go  HERE.

For more information about Three Poems, head on over to the official Facebook Page.

Short Film Review: Nothing to Something (Documentary Short from Filmmaker Michael Artiles)

Our romance-themed entertainment site is on a mission to help you find the best period dramas, romance movies, TV shows, and books. Other topics include Jane Austen, Classic Hollywood, TV Couples, Fairy Tales, Romantic Living, Romanticism, and more. We’re damsels not in distress fighting for the all-new optimistic Romantic Revolution. Join us and subscribe. For more information, see our About, Old-Fashioned Romance 101, Modern Romanticism 101, and Romantic Living 101.
Pin this article to read later! And make sure to follow us on Pinterest.
By Amber Topping on June 22nd, 2014