I love Christmas for many reasons. One of the things I really enjoy at this time of year is all the holiday-themed movies. But Hallmark isn’t my only source for the warm fuzzies I get watching these films. Nope, I’m a big fan of the classics too. With their old-fashioned values, music and holiday decorations, these stories always leave me with a warm glow. Such is the case with The Shop Around the Corner. 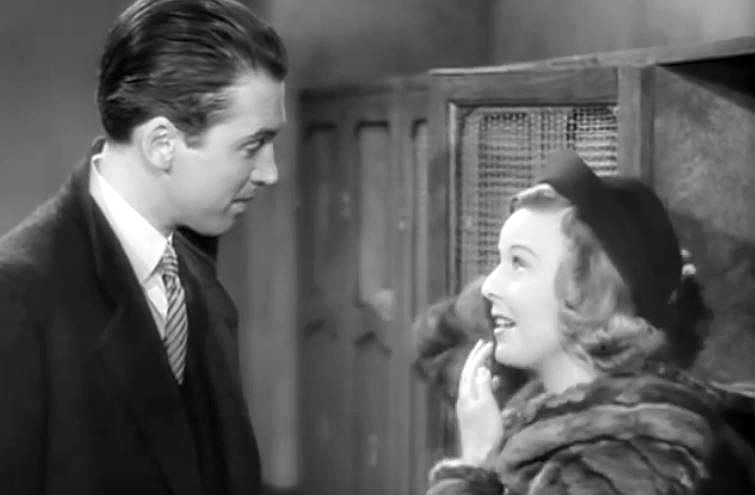 Alfred Kralik is the longest serving employee at Matuschek and Company in Budapest, Hungary. Personally taken under the wing of Mr. Matuschek, Kralik has worked his way up the ladder to become the store’s top sales clerk. He is joined by his four other fellow employees Vadas, Flora, Ilona, his good friend Pirovitch and the errand boy Pepi who have all formed a special camaraderie with each other. They aren’t just co-workers but a family of sorts.

But things begin to change and upset Kralik’s life of routine. First, Matuschek hires the beautiful but snippy young Klara Novak. Kralik and Klara do not get along. She constantly challenges his authority and he resents her rudeness to him. Then Kralik’s formerly close relationship with his employer shows some fractures. He cannot fathom why Mr. Matuschek is suddenly treating him so coldly. The one bright spot in Kralik’s life is his growing closeness with his anonymous female pen pal. Though he has never met her, he begins to fall for her, recognizing her as a kindred spirit. Just when Kralik believes he’s getting a raise, he’s unexpectedly fired instead. On the same night, he goes to meet his pen pal and discovers Klara waiting in the same restaurant. Things look pretty bleak for him. But Christmas is a time when anything can happen.

If the storyline in The Shop Around the Corner sounds a bit familiar, that’s because the same story was used and updated for the beloved rom-com classic, You’ve Got Mail. However, both films are actually adaptations of the 1936 play, Parfumerie. In this original adaptation, the two pen pals are not business rivals but co-workers. If you’re like me, you may find yourself comparing the two movies as you watch them.  There are several scenes which are almost exactly the same such as the cafe scene where the men discover the true identity of their female pen pal.  Some of the dialogue is similar too. But, there are enough differences between the two films to make them unique. There are also homages to Shop Around the Corner in You’ve Got Mail, so it’s worth checking both out to catch the references.

James Stewart and Margaret Sullavan play Kralik and Klara with great credibility. Their initial attraction quickly morphs into a combative relationship as they constantly misunderstand each other. This is offset by their “meeting of minds” as they unknowingly correspond with one another. Honestly, I found Sullavan’s character a little frustrating. She’s consistently and deliberately rude to Kralik for a reason which is only explained at the end. It’s hard to understand why he would be interested in her. But their interactions sparkle with tension whenever they argue suggesting a hidden passion for each other. This was Stewart and Sullavan’s third of four films together. Her brittle personality is the perfect complement to his more laid back onscreen persona. They really do exhibit great chemistry together.

Klara: Oh, my Dear Friend, my heart was trembling as I walked into the post office, and there you were, lying in Box 237. I took you out of your envelope and read you, read you right there.

Kralik and Klara’s relationship provides the romance in The Shop Around the Corner. But one of the best things about this film is the interactions and relationships of this family of co-workers. It’s obvious they care about one another and accept each other as they are. Even those who don’t like each other are kind and respectful. Kralik’s friendship with his boss almost mimics a father-son relationship, which is what makes it so heartbreaking when Matuschek fires him. It’s clear that it breaks Matuschek’s heart to do so. I also really love the friendship Kralik and Pirovitch share. Pirovitch acts like a brother to Kralik, supporting him and encouraging him in difficult times.

The Shop Around the Corner also sports the comic touch of respected director Ernst Lubitsch. While he presents a study of personalities and relationships, he doesn’t leave out the subtle humor he’s famous for. A running gag is Matuschek asking for his employee’s “honest opinion.”  Every time he does Pirovitch finds ways to make himself scarce knowing his boss really just wants everyone to agree with him. The errand boy Pepi also serves as comic relief while playing a pivotal role in the movie.

And of course, there is inherent humor in the situation between Klara and Kralik. He learns who his pen pal is long before she does. This puts him in the situation of continuing to receive her insults in person while she also goes on and on about how wonderful her pen pal is. Of course, James Stewart’s various facial reactions as he responds to her simultaneous criticism and praise are nothing short of brilliant.

While The Shop Around the Corner does not put a focus on the Christmas season, it’s an excellent example of a film containing all the things that make the season special. It has romance, humor and forgiveness. It highlights the values of loyalty, friendship and kindness. And it manages all this with sincerity and without being sappy. It’s a film the whole family can enjoy.

Have you seen The Shop Around the Corner? What is your favorite classic Christmas movie?

Our romance-themed entertainment site is on a mission to help you find the best period dramas, romance movies, TV shows, and books. Other topics include Jane Austen, Classic Hollywood, TV Couples, Fairy Tales, Romantic Living, Romanticism, and more. We’re damsels not in distress fighting for the all-new optimistic Romantic Revolution. Join us and subscribe. For more information, see our About, Old-Fashioned Romance 101, Modern Romanticism 101, and Romantic Living 101.
Pin this article to read later! And make sure to follow us on Pinterest.
By Brittaney B. on December 13th, 2018