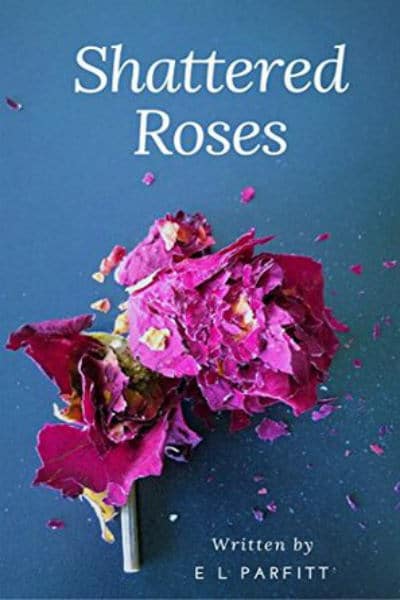 When Megan goes for an interview at a residential home, she has one primary concern. She hopes to get a volunteer position and work with the residents to help with her career ambitions. When she’s assigned to one of the residents, she is delighted to begin visiting her charge on a regular basis. Little does she know that her encounters with the elderly woman who has lived in the home since it opened will introduce her to a strange story of magic, curses and dark secrets. This enigmatic tale all unfolds in E. L. Parfitt’s novella Shattered Roses, a retelling of the Beauty and the Beast fairy tale.

RELATED POST: YA BOOK REVIEW: BEAUTY-A CLASSIC RETELLING OF THE STORY OF BEAUTY AND THE BEAST

Megan regularly visits Lady ostensibly to read to her.  However, she spends a good part of her time listening to the elderly woman’s stories of her life. Lady speaks mainly of her relationship with the Duke, the man who once owned the house. Through Lady, Megan learns more about the massive house with its opulent gardens with statues and black roses. Lady met the Duke years ago when she was young through her father. To call the Duke secretive and mysterious would be an understatement. As Lady describes their relationship, this strange figure from the past looms over the present. Not surprisingly Megan is fascinated and puzzled by Lady’s tale, especially as her charge often seems mentally confused. Sometimes she talks about the Duke as if he is still alive as if he might walk through the door at any moment. Can Megan really believe anything Lady says?

When she is not with her charge, Megan deals with her studies and her life at home with her clever sister and kind, supportive mother.  Megan also struggles with her own past. She has lost her father who was tragically killed years before. Although she barely remembers him, the loss still pains her. As Megan learns more about Lady and the Duke, the mysteries in her own life unfold.

The characters are the strong points in E.L. Parfitt’s story. Megan is a likable, relatable girl who struggles to be the odd one out at school and in her extended family. She is mature and introspective and not as interested in “nail varnish colours, gossip and possible weddings” as her female cousins.

Her younger sister Faiza is similarly intelligent though more likely to fit in with her peers. Despite their differences, they get along well. It’s enjoyable reading about the sisterly relationship bolstered by their kind mother. She can easily join in the girls’ playfulness just as well as she can comfort Megan as she struggles with her feelings about her lost father.

It’s also refreshing for Megan’s family to be immigrants from the West Indies, an unusual heritage in YA stories. (It helps that I’m also West Indian!) Megan questions her mother to try and fill in her vague memories of her father. The story often touches on difficulties and prejudice which ring true to the community in the past and even the present. “There were signs displayed in shop fronts which read ‘No dogs, no coloureds, no Irish,’ ” explains Megan’s mother, describing Britain when Megan’s grandfather first arrived in the 1950s.”Your father grew up and wanted to become a journalist but suffered much prejudice, even in the 80s when we were married.”

For those who love the tale of Beauty and the Beast, there are many elements which are immediately recognizable from Lady’s story. There’s the familiar plot of a young woman caught up in the dark secrets of a rich, mysterious man. There’s the suggestion that a curse overshadows this man’s life. Roses are of course an important symbol mentioned throughout. There’s the catalyst when the young woman’s actions break the spell which holds the beast. It’s really interesting seeing the story told in a different way.

Despite the interesting elements E.L. Parfitt has included in Shattered Roses, there are several ingredients missing which could have made this a truly captivating tale.

Since the reader anticipates a Beauty and the Beast story, we expect that aspect to have a strong impact. However, it’s effect is diminished. Many of the scenes depict Lady telling the story to Megan who sits with her reacting to what is happening. This obvious framing makes it very difficult for the reader to be transported into Lady’s story. You feel more like you’re getting a second-hand account rather than imagining that you’re actually walking the halls of the house with young Lady and the Duke.

Also because Lady’s mental state is not perfect, she tells the story in a disjointed way. We jump with her around to different points. Sometimes Lady even speaks of the Duke as if he is alive though facts seem to suggest otherwise. The author clearly does this to add mystery, but it mostly left me feeling disconnected from the story. Lady’s narrative doesn’t allow the suspense and drama of the past to build. One moment we seem to have come to the end of her story, then we seem to be getting a glimpse into the Duke’s past. The sequence of events is not clear. Perhaps this explains why even though I read the novella twice, I still felt as if there was no real resolution to Lady’s tale. I was left feeling unfulfilled and unsatisfied, unsure of what was real and what wasn’t.

RELATED POST: 9 BEAUTY AND THE BEAST YA NOVELS DESTINED TO ENCHANT

Unfortunately, Megan’s own story, though interesting, is not engaging enough to make up for the deficiencies in Lady’s own. Her family has their own enigmas, but they are treated very lightly for most of the story. We spend most of the time exploring Megan’s home life which is adequate but not very compelling.

What is also perplexing is the culmination of her plot line. A sudden turn of events reveals the resolution to a mystery in Megan’s family. Even though the author hinted at this previously, it still feels as if we are hit with a crash of details and developments near the end of the story just when it should be winding up. It is also the first time that the theme of Beauty and the Beast is even suggested in Megan’s part of the tale. Until this development, the connection between Lady’s tales and Megan’s experiences are rather tenuous. Without further exploration, Megan’s arc ends in a rushed manner as if the author realized that going on longer would threaten the novella’s length. We are left feeling as if we have been deprived of a real story just as it was beginning.

If you are curious about another take on the Beauty and the Beast fairy tale, you might want to have a look at Shattered Roses. However, the treatment of the story makes it difficult to immerse yourself in this story and ultimately could leave the reader unsatisfied.

A Shattered Roses movie would be a great medium to build on visuals and really immerse the viewer in the magical aspects of the story. It would be a great opportunity for young Indian actresses to play Megan and her sister. I can imagine Mindy Kaling as their loving mom. It would be great to see her in a role with a bit of drama. The casting of young Lady could go to many talented black actresses like Letitia Wright and Gugu Mbatha Raw (who has already been in a Beauty and the Beast movie!). Older Lady would require a strong black actress like Mary Alice or Leslie Uggams. Matthias Schoenaerts would probably be very good at playing the mysterious and tortured Duke.

Shattered Roses is never graphic but there are discussions of abuse, death, racism, and murder. Sex is vaguely implied once.

What are your favourite Beauty and the Beast adaptations in movies, TV shows or books?

Our romance-themed entertainment site is on a mission to help you find the best period dramas, romance movies, TV shows, and books. Other topics include Jane Austen, Classic Hollywood, TV Couples, Fairy Tales, Romantic Living, Romanticism, and more. We’re damsels not in distress fighting for the all-new optimistic Romantic Revolution. Join us and subscribe. For more information, see our About, Old-Fashioned Romance 101, Modern Romanticism 101, and Romantic Living 101.
By Dixie-Ann Belle on January 26th, 2018