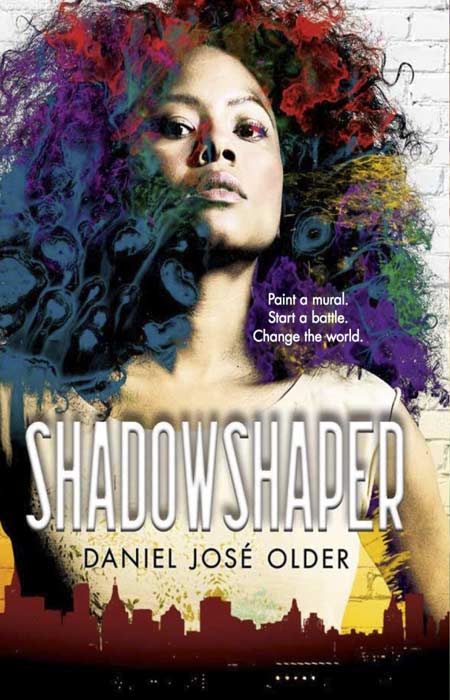 Shadowshaper begins with Sierra Santiago, a Latina artist, painting a mural in a local space. She realizes that something is wrong with the art. The artwork in her Brooklyn neighborhood is changing, but she can’t quite figure out what is happening. Unable to articulate these changes to anyone, Sierra is more than a little distracted, in more ways than one.

Her grandpa, Lázaro, recently had a stroke, and in between moments of confusion, he has clarity in a way that Sierra doesn’t understand. Lázaro tells Sierra that the neighborhood paintings are fading because there are mysterious forces coming for a group that he names as the shadowshapers. He also tells her that she needs to finish her mural as soon as possible and that she must enlist the help of a boy from school, Robbie, a boy who Sierra doesn’t know very well.

With Lázaro’s words on her mind, Sierra heads to a party with some of her friends, Bennie, Izzy, and Tee, and runs into Robbie. Just as Sierra and Robbie begin to discuss the shadow shapers and Lázaro’s message, a strange man appears, and Robbie tries to lead the man away from Sierra. However, the man finds Sierra and asks her about someone named Lucera. Sierra manages to break free of the zombie-like stranger, and heads home, her mind reeling with the night’s events.

The next day, Sierra approaches her grandpa, looking for answers about Lucera and the shadowshapers. Armed with “donde mujeres solitarias van a bailar” (“where lonely women go to dance”) as a possible location for where Lucera could be, and the name Jonathan Wick, from a photo Lázaro shows her, Sierra starts her search. The paintings around the neighborhood are fading fast, increasing the urgency of Sierra’s quest. Tracking down information on Wick leads her to Columbia University, where she meets an anthropology archivist named Nydia. She’s familiar with Wick’s work, in a different way than Sierra, and helps Sierra with her research.

Catching up with Robbie, he describes more behind the shadowshapers to Sierra, when she keys him on Wick’s involvement and the phrase Lázaro told her. Robbie explains that shadowshaping is the bond between art— in the form of stories, paintings, and music —and the spirits. The craft is passed from person to person, and not everyone can shadowshape, or chooses to become a shadowshaper. Interestingly enough, Robbie also reveals not everyone see the effects of shadowshaping. The neighborhood art is fading because Lucera has disappeared, a war is coming, and the spirits are leaving the paintings.

As Sierra tracks down more information about the shadowshapers, and Robbie teaches her to shadowshape with her art, they see the war between the shadowshapers and the evil spirits brewing quickly. The evil spirits are stealing people from the neighborhood, removing their spirits and reanimating the bodies. Finding out the truth behind Lucera’s disappearance, her family’s involvement with shadowshaping, and Wick’s motives are the keys to ending the fight, and Sierra is intent on doing so.

With her friends as her allies, Sierra’s strength as a shadowshaper comes out in full force in the epic climax between the spirits that will not disappoint.

The magic that Daniel José Older creates in the novel is uniquely refreshing. He manages to solidify Brooklyn as an urban fantasy landscape, bringing in elements that are both familiar and unfamiliar; descriptions of the neighborhood sights and sounds will capture the reader’s attention; and the mix of art and culture within the world of shadowshaping will provide moments that nearly dance right off the page. There is plenty of explanation regarding what shadowshaping is and how it works without overcomplicating the plot.

More impressively, the characters’ dialogue is accurate for teenagers’ voices. So many YA books have teenagers that sound like adults, which, for some readers (including this one), is jarring. Whether it is conversations via text message, or face-to-face, the teens in Shadowshaper sound like real teens, which I appreciated immensely. Sierra’s neighborhood is peppered with a wide array of characters, and even if they’re only present for a few scenes, Older fleshes out each and every one of them, without relying heavily on stereotypes or portraying worn-out tropes.

The relationships between the characters have their own sets of complications, but the foundation that Older frames the plot with allows for these realistic complications. Equal weight is given to both Sierra’s family and her group of friends, showing that sometimes your friends are really your family, and helps to make these relationships relatable.

Sierra’s agency is present throughout the book, and though she does have moments of uncertainty, (as most teens do), readers will celebrate her triumphs along with her.

I especially appreciated that though Sierra and Robbie are shown as partners in their journey, Sierra is never portrayed as a damsel in distress. She is capable of making decisions and acting on them on her own, whether Robbie is present or not. Their relationship is never set completely center stage in the story, but they have moments of romance that won’t leave the reader unsatisfied. A scene where they go dancing is particularly heated!

For readers unfamiliar with urban fantasy, this is a good starting point. For me, I tend to read more straightforward fantasy and science fiction, and this was a nice change of pace. Sierra’s neighborhood is beautiful and diverse, the moments of shadowshaping would be exciting to see, and I think it would easily translate well to the screen as a TV series, especially with the right casting.

Our romance-themed entertainment site is on a mission to help you find the best period dramas, romance movies, TV shows, and books. Other topics include Jane Austen, Classic Hollywood, TV Couples, Fairy Tales, Romantic Living, Romanticism, and more. We’re damsels not in distress fighting for the all-new optimistic Romantic Revolution. Join us and subscribe. For more information, see our About, Old-Fashioned Romance 101, Modern Romanticism 101, and Romantic Living 101.
Pin this article to read later! And make sure to follow us on Pinterest.
By Clarissa Hadge on June 23rd, 2015