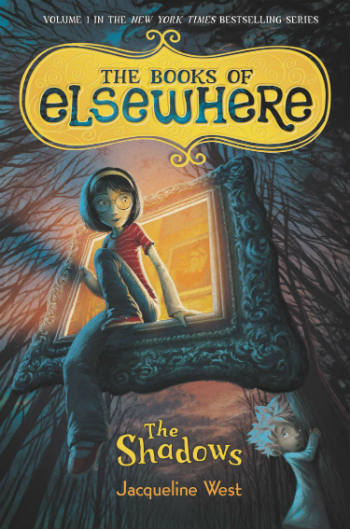 This house is keeping secrets . . .

When eleven-year-old Olive and her parents move into the crumbling mansion on Linden Street and find it filled with mysterious paintings, Olive knows the place is creepy—but it isn’t until she encounters its three talking cats that she realizes there’s something darkly magical afoot. Then Olive finds a pair of antique spectacles in a dusty drawer and discovers the most peculiar thing yet: She can travel inside the house’s spooky paintings to a world that’s strangely quiet . . . and eerily sinister. But in entering Elsewhere, Olive has been ensnared in a mystery darker and more dangerous than she could have imagined, confronting a power that wants to be rid of her by any means necessary. With only the cats and an unusual boy she meets in Elsewhere on her side, it’s up to Olive to save the house from the shadows, before the lights go out for good.

The Shadows (The Books of Elsewhere #1) Review

The Shadows by Jacqueline West, more than anything else, is the perfect quick read if you are looking for something slightly spooky and entertaining. I happily breezed through the pages in a matter of hours.

In book one of The Books of Elsewhere series, Olive, like many a typical middle-grade heroine, is a bit of an outsider. She’s had to move around a lot, and therefore, friends are a bit scarce. When she moves into a worn down mansion, her loneliness and active imagination mark her new home as an endless resource for thrilling discoveries. First, she meets talking cats with secrets of their own (a fact in which she never questions her own sanity). THEN she begins to unearth the truth behind the sinister paintings of her new home. Olive soon realizes she can enter the paintings, but there is also something terrible afoot with a shadow that wants to harm her. Can she discover the truth and save herself before a terrifying evil gets free?

The suspense and mystery, while not overly difficult for adult readers, made for a wonderful read. The Gothic atmosphere of the Linden Street Victorian mansion transported me into Olive’s world just as easily as Olive enters the dimensions of the mysterious paintings. The adorable talking cats also made me want to keep turning the page. Seriously, who doesn’t want talking cats to protect you?? I loved discovering this magical world and appreciated the author’s world-building abilities. For librarians, I would suggest this novel as a great tween book club choice. There are plenty of topics to discuss like imagination, friendship, trust, courage, and loneliness. Plus, it is entertaining enough to capture their interest.

RELATED | Living With The Dead: A Review of The Graveyard Book by Neil Gaiman

Although a fast and fun read, the book does have a few drawbacks, however. Aside from Olive, most of the main characters and villains needed more development. They were very 2-dimensional and I didn’t buy the motivations of the characters as much as I wanted to. Even Olive’s painting friend was paper thin. However, since this is only book one, I imagine the complexity will grow in future books. As of now, the parents, the friend, and the villains all definitely needed just a little more.

Still, overall, I highly recommend this Gothic middle-grade read because of the descriptive atmosphere, intriguing premise, and enjoyable protagonist. The Shadows is a great start and I look forward to seeing how Olive’s world changes in future books.

With Stranger Things opening the door for cult supernatural shows about kids, now would be the perfect time for The Books of Elsewhere to be a TV series. The world of Elsewhere would also be so cool visually in a Coraline, otherworldly sort of way. A limited television show works best because there are several books in the series. It would also make room for the development of secondary characters. A Gothic show for kids and young teens would be awesome. It’s time for another talking cat besides Salem to walk onto our TV screens!

What do you think about The Books of Elsewhere? Sound off below…

Our romance-themed entertainment site is on a mission to help you find the best period dramas, romance movies, TV shows, and books. Other topics include Jane Austen, Classic Hollywood, TV Couples, Fairy Tales, Romantic Living, Romanticism, and more. We’re damsels not in distress fighting for the all-new optimistic Romantic Revolution. Join us and subscribe. For more information, see our About, Old-Fashioned Romance 101, Modern Romanticism 101, and Romantic Living 101.
Pin this article to read later! And make sure to follow us on Pinterest.
By Autumn Topping on November 10th, 2016