(I received a free copy of Saving Shadow from the author Laura Beers to write an honest review on The Silver Petticoat Review. I was not financially compensated for this post and all opinions are my own.) 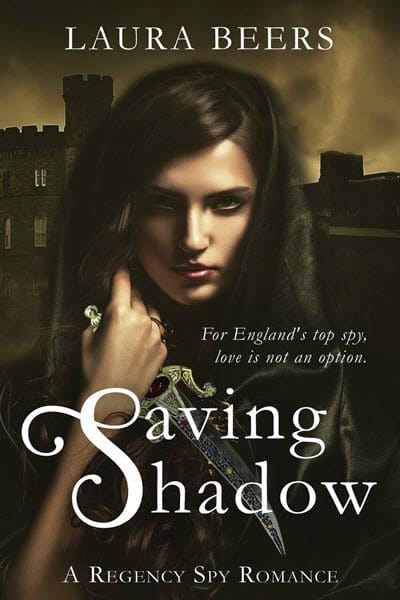 Saving Shadow introduces Lady Elizabeth Beckett, the headstrong and independent daughter of the Duke of Remington. She also happens to be one of the top agents for the Crown, her true identity hidden behind her code name: Shadow. Eliza’s photographic memory makes her the perfect spy.

After a mission in France takes a turn for the worst, Eliza returns home shaken. Refusing to confide in anyone, Eliza continues her investigation into the kidnapping and selling of women to the highest bidder. When young ladies of society begin disappearing from their homes, Eliza teams up with a new partner. Lord Sinclair has his own motive to catch the man responsible for the missing girls. Together, Lady Eliza and Lord Sinclair race against time to bring down their common enemy. However, to succeed, they must learn to trust each other as partners and, perhaps, something more.

For a Regency romance, the plot of Saving Shadow is dark. Human trafficking is a heinous crime with a very long history. While Saving Shadow is, in part, about trafficking, author Laura Beers steers clear from the realities of the topic. Instead, she touches very lightly on the effects. This keeps the crime at an arm’s length. This may or may not be to the story’s advantage. However, that depends on your perspective. But, what it does do is keep the focus on Eliza.

Eliza’s passion to bring the man responsible for these horrors to justice is fierce. She becomes the champion for these women, regardless of their socioeconomic background. As the effects of life as a spy begin to catch up with Eliza, it’s this need for justice that drives her. As a result, Eliza will do anything to bring them justice. Including partnering with the patronizing Lord Sinclair.

Benedict, Lord Sinclair, falls immediately under Eliza’s spell. Yet, when he discovers Eliza is Shadow, he fumbles. Terribly. I am talking an epic eye-rolling-muttering- insults-under-your-breath (I whispered, “Idiot!”) fumble. Quickly realizing his mistake, Benedict sets out after Eliza to apologize. He needs her as a partner. After all, the man Eliza is hunting is also responsible for the murder of Benedict’s brother.

Make no mistake, Saving Shadow is first and foremost a romance. The novel focuses primarily on the relationship between Eliza and Benedict. Eliza is the type of female character I salivate for in romance novels. She is intelligent, witty, and fiercely independent. There is also a touch of vulnerability that Eliza takes great pains to hide. Benedict, on the other hand, is just one step away from being progressive. This makes for some charming banter between the two.

While I enjoyed Saving Shadow, I found myself the tiniest bit frustrated at the end. There are pieces missing in Eliza and Benedict’s characterization. Their motivation, while clearly explained, needed more emotion behind it. I wanted more depth to these two very appealing characters. In addition, I felt the pacing was off. I was expecting more tension and buildup between Eliza and Benedict. Instead, from my perspective, everything seemed rushed. I also felt that we learned more about Eliza from the men in her life than we did from Eliza directly.

However, these are mere quibbles. Overall, I thought Saving Shadow was lovely. The repartee between Eliza and Benedict was entertaining and swoon-worthy. The relationship between Eliza and her brother was heartwarming. More importantly, Eliza maintains her sense of self. This makes her a wonderful female protagonist. An uncomplicated read, Saving Shadow is perfect to toss in your travel carry-on. Or, as I did, to cozy up with on a rainy day.

Content Note: Other than a few deliciously romantic kisses, Saving Shadow does not have any explicit content or language.

You can purchase Saving Shadow at your favorite bookstore or online for Kindle, NOOK, or Kobo. For more on Laura Beers, visit her on Facebook.

Have you read Saving Shadow? What did you think? Drop me a line in the comments below!

to tell you how ardently I admire and love you.”v

Our romance-themed entertainment site is on a mission to help you find the best period dramas, romance movies, TV shows, and books. Other topics include Jane Austen, Classic Hollywood, TV Couples, Fairy Tales, Romantic Living, Romanticism, and more. We’re damsels not in distress fighting for the all-new optimistic Romantic Revolution. Join us and subscribe. For more information, see our About, Old-Fashioned Romance 101, Modern Romanticism 101, and Romantic Living 101.
Pin this article to read later! And make sure to follow us on Pinterest.
By Catherine on October 13th, 2017