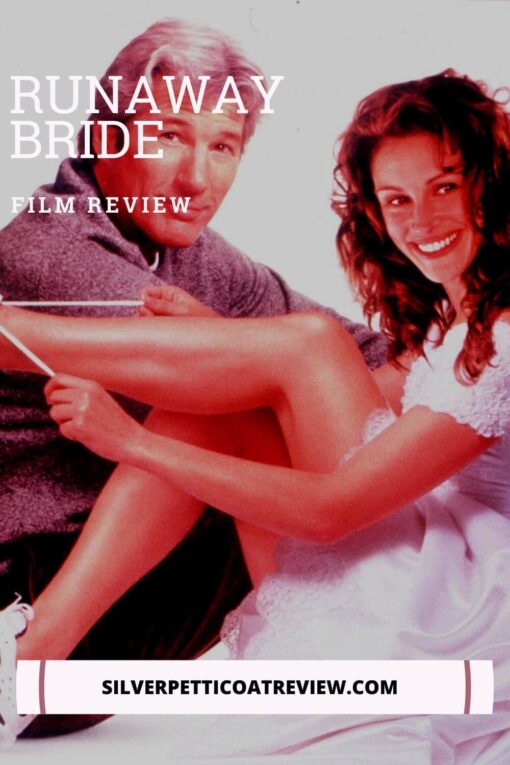 No matter how much production qualities and cinematic techniques change, sometimes I go back to basics. For me, this means revisiting a film that’s on the nostalgic list. One such movie is Runaway Bride, a romantic comedy starring Richard Gere and Julia Roberts.

The first scene we see is a lush green field where a woman on a horse gallops through the field. But this isn’t the unusual part. The anomaly is the woman clothed in a voluptuous white wedding gown overflowing in white tulle.

We then meet Ike Graham (Gere), a successful New York newspaper columnist whose latest tip inspires his new article. The subject is on a woman from a small middle-of-nowhere town who leaves grooms at the altar. In her hometown, she’s called the “Runaway Bride.”

Maggie Carpenter (Roberts) doesn’t intend to leave any of her grooms (there have been three in total). Still, somehow, she always does. This time, things are going to be different. She’s about to marry “the one,” and she’s happier than ever.

But then Ike pops up in her small hometown. Looking for his story, Ike isn’t about to give up on following Maggie around, but what he doesn’t expect is just how charming his subject would be.

If you’re anything like me, reader, you too enjoy seeking out new films to watch. I engage in this activity so much that it’s probably considered unhealthy. But in my pursuit of this, sometimes I run across a romantic-comedy from my teenage years.

My typical reaction is to drop everything and decide a re-watch is in order. Runaway Bride is one of those films. I don’t watch it often, but I’m always surprised by how charming it is when I do.

“But I also guarantee that if I don’t ask you to be mine, I’ll regret it for the rest of my life, because I know, in my heart, you’re the only one for me.”

Runaway Bride reunites Richard Gere and Julia Roberts, who audiences first fell in love with in Pretty Woman. In the director’s seat is Garry Marshall, a man well-known not just for Pretty Woman, but also films like The Princess Diaries and Raising Helen.

What’s so fun about Garry’s movies, aside from the typical lighthearted atmosphere, is that so many feature the same cast in supporting roles. This film is no different: Hector Elizondo, Joan Cusack, and Larry Miller, all co-star in Runaway Bride. His casting choices speak to a neat cinematic pattern of familiarity.

Apart from the cast, there’s much to love about this romantic comedy. For one, it’s a wholesome story that keeps the viewer invested in the characters, characters who wear their hearts on their sleeves, and take chances. Each of the players finds a way into our hearts.

We leave them all in a “good place,” which is the best thing a story can do. In all, there’s a genuine maturity about this story. All of which the script pursues to that wished for happily ever after.

Those of us who love this genre and want something with a moral compass will enjoy Runaway Bride. The nuances of this script are beautiful. Plus, the ending manages to be genuine and retains a joyful bent that’s wonderful. The movie’s imperfect, but for a fun night at home, it’s a delight that invites much laughter.

Where to watch: You can rent/buy on Digital and DVD.

Content Note: With a PG rating, this is a relatively clean romance with only a few minor innuendo instances.

Do you have fond memories of Runaway Bride? Do you like this cast together (Richard and Julia)? Comment down below with your favorite moments. I look forward to chatting with you all.