I’m a romantic at heart. Over the years I’ve read many romances which I’ve loved. But every now and then I run across a book which isn’t just a romance but also thoroughly romantic. Have you ever read a novel(la) which is a love story with a city? My first experience with this was Rachel McMillan’s Love in Three-Quarter Time. It achieved the impossible, supplanting my long-held love for all things Paris with a new one for Vienna -a city I’ve never even seen. That love affair grows and expands with McMillan’s second Vienna novella, Rose in Three Quarter Time. 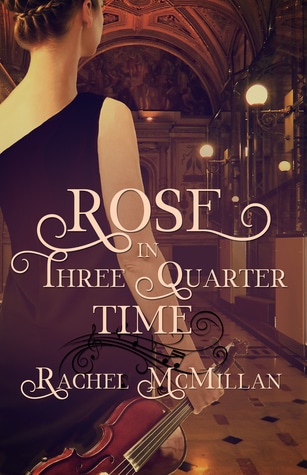 Rose MacNeil is a gifted, but undiscovered violinist when Oliver Thorne first meets her after a performance. Oliver, once a talented cellist, is now a famous conductor for the Ranier Quartet in Vienna after an accident ruined his ability to play. Rose dazzles Oliver both personally and professionally. He encourages her to stick around Vienna until a spot in his orchestra opens up. In the meantime, the two strike up a friendship, bumping into each other and wandering around the beautiful, historic city.

Rose finally gets her chance and is offered the position of the first chair. However, her visa is denied. Oliver, desperate not to lose her, and Rose, desperate to hold onto her big break, enter into a marriage of convenience. But Oliver’s contract has a strict morals clause which prohibits relationships with members of the Quartet, so they must keep their new relationship a secret.

This isn’t the only challenge Oliver and Rose face. Oliver tries to keep to his self-imposed vow to love Rose from a safe emotional distance and respect her wish for friendship only. Rose finds herself falling for her friend as they live together and she sees the real man behind the fame and position. Add in a hauntingly gorgeous city and the romance of their mutual love of music and these two may just find themselves breaking all their own rules.

As much as I enjoyed McMillan’s Love in Three-Quarter Time, her follow up Rose in Three Quarter Time just may be one of the most romantic stories I’ve ever read. How could it help but be, with the delicious combination of a marriage of convenience with the author’s obvious love for music and Vienna entwined in a glorious fictional symphony?

A MARRIAGE OF CONVENIENCE

I love the marriage of convenience trope and this one is well done. The marriage itself doesn’t take place right away. This allows time for Oliver and Rose to build a really solid friendship and for Oliver to realize how much he loves Rose. His proposal isn’t one of convenience, but one of necessity to keep the woman he loves close. It also allows for the display of one of the most underrated qualities in romance, restraint. What is sexier and more sincere than one or two people who really love each other by subverting their own needs and desires for the benefit of the other?  Be still my beating heart!

This convenient marriage serves to increase the romantic tension between Rose and Oliver as they each give subtle clues to their feelings without directly expressing them. I love how Rose falls for Oliver precisely for the mundane, everyday things she discovers about him through living together. Oliver’s care and concern for Rose manifest itself in those little details.  And then there is his grand gesture. It reminds me very much of another of my favorite romantic moments ever from the film The Holiday between Iris and Miles. But I won’t spoil it by telling you what it is.

I really appreciate how McMillan honored the institution of marriage, even while pushing her characters into it for the sake of convenience. Both Rose and Oliver enter it with a strong commitment and sacred reverence for marriage. They intend to keep their vows for life even while living as friends. Now that is real dedication.

A MOST ROMANTIC CITY

Heightening the enchantment of this novella is the author’s own love of Vienna. She seamlessly weaves this in along with details to create almost a third character out of the city. I could almost smell the scent of chocolate and coffee, see the vibrantly painted buildings and hear the stories of the past as I wandered along with Rose and Oliver through the city. It takes a very skilled author to make a city come alive. It takes an even better one to make you fall in love with it.

A LOVE OF MUSIC

I also had a very difficult time resisting the sweet seduction of the music. It made me wish I was as passionate about something as Rose and Oliver are about it. It was fascinating to get a glimpse into the world of professional music through their interactions with the orchestra. Even after ten years of piano lessons playing classic composers, I learned so much. But neither this book nor Rose and Oliver are the least bit snobbish about the subject. This love of theirs also extends to Celine Dion, Barry Manilow, and Broadway musicals. Theirs is the simple joy of playing for the love of it and not the acclaim. Then, of course, there is Oliver’s passion for composer Shostakovich. This ends up playing a role in him expressing his love for Rose. Oliver expresses it best when he calls him, “Shostafreakingkovich”!

MORE REASONS TO FALL IN LOVE

Of course, there are other details to love about Rose in Three Quarter time. There is Parcheesi the cat and the reappearance of Klaus and Evelyn from Love in Three Quarter Time. Fans of classic films and Broadway plays will find references to both sprinkled liberally throughout. Then there is the toonie from Rose’s homeland of Canada which plays a role in their living arrangements. We also get a brief introduction to the city of Brussels and an unexpectedly romantic moment in a city not known for its’ romance.

I’m not generally a fan of novellas because I don’t feel their brevity allows for enough time for plot or character development. However, Rose in Three Quarter Time does not suffer from a lack of either. Oliver’s reticence and self-protection mechanisms are charmingly adorable and also explained as the story develops. Rose is like a sassy kitten whose past is also revealed as their relationship grows.

Any adaptation of this novella would require a large budget to suitably do it justice. It definitely needs to be filmed on location. Netflix recent foray into original films proves that it could probably produce a gorgeous film. However, I would really love to see it on the big screen. I asked the author who she would cast for the film. She confessed that Shaun Evans of Endeavour fame is the inspiration for Oliver. Having finished the book, I have to agree, especially since Endeavour Morse and Oliver both share an enjoyment of orchestral music. I think either Elisha Cuthbert or Eloise Mumford (of Hallmark fame) would make an excellent Rose.

In case, you can’t tell from my glowing review, I absolutely adored Rose in Three Quarter Time. Not only is it one of the most thoroughly romantic stories I’ve ever read, but it will also find itself a home in my list of favorites. Long after I finished the last page the soft glow of Rose and Oliver’s love story, the after strains of the music and the beauty of Vienna lingered with me.

MORE ON THE AUTHOR

Not only do I highly recommend this novella, but I also encourage you to read Love in Three Quarter Time. It’s not necessary to read it first, but it does give a bit more depth to this story. McMillan is also the author of two historical detective series, Herringford and Watts and Van Buren and De Luca. I further suggest that you check out McMillan’s Pinterest page for Rose in Three Quarter Time to see some of the inspiration behind the story. And finally, not only is McMillan a talented author, but she has great taste in books. Follow her on Instagram for her amazing book recommendations, some of which have become personal favorites. And stay tuned to our website for a soon to come interview with the author herself.

Where to Buy: This book releases September 30 but is available for Kindle pre-order on Amazon.

Content Note: This is a clean read. It contains a few steamy kisses and the inference of more physical intimacy though, but it should be safe for ages 13 and up.

Our romance-themed entertainment site is on a mission to help you find the best period dramas, romance movies, TV shows, and books. Other topics include Jane Austen, Classic Hollywood, TV Couples, Fairy Tales, Romantic Living, Romanticism, and more. We’re damsels not in distress fighting for the all-new optimistic Romantic Revolution. Join us and subscribe. For more information, see our About, Old-Fashioned Romance 101, Modern Romanticism 101, and Romantic Living 101.
Pin this article to read later! And make sure to follow us on Pinterest.
By Brittaney B. on September 20th, 2018