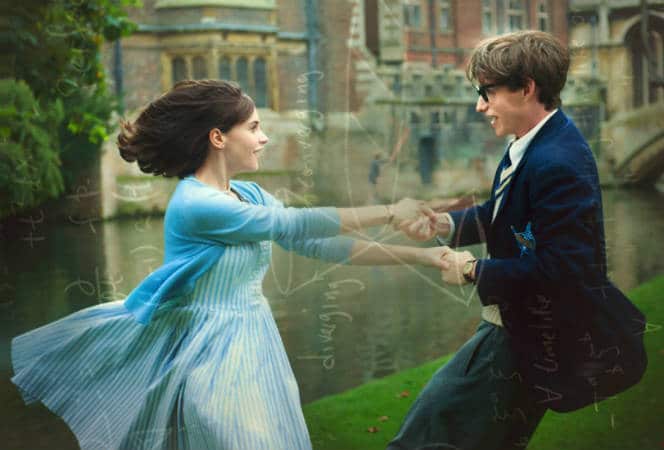 THE MOVIE: The Theory of Everything

THE MOMENT: “Your glasses are always dirty”.

People around the world respect Stephen Hawking as a scientist, and as a disabled person who is not defined by his disability.  Not many, I suspect, saw him as a romantic hero before the release of The Theory of Everything, a bittersweet and honest love story, based on the memoirs of Jane Hawking.  The film follows their relationship from their first meeting as students at Cambridge until the day Stephen receives his OBE from the Queen at Buckingham Palace. Over the years, we see Stephen’s descent into motor neurone disease, his and Jane’s strategies for coping with his increasing disability, and the development of his ideas on time that would lead to A Brief History of Time.  Initially given two years to live, Stephen and Jane find life – and marriage – much longer than that.  As Stephen’s career takes off, Jane’s role becomes increasingly that of carer to him and mother to their three children.  The film deals with what happens when different carers come into their family life, and the emotional effect those people have on both Stephen and Jane.  It also treats with great sensitivity the difference in their beliefs; Stephen is an atheist and Jane a Christian. There is no conventional “happy ending” – this is a true story, and the plot has to stay true to events – but it reaches a moving and satisfying conclusion. 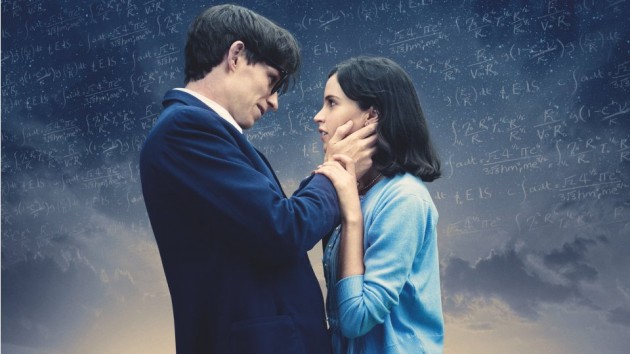 Stephen Hawking – a young PhD student with a glittering career in cosmology ahead of him – has been informed by doctors that he has motor neurone disease.  He will gradually lose control of all voluntary reflexes, including speech.  The doctors give him two years to live.  In response, Stephen withdraws to his room, pushing away his friends and Jane, the arts student with whom he has fallen in love.  Jane refuses to be sidelined, seeking out Stephen’s friends and coming in person to his university digs to force him to face life.  She invites him to play croquet (something he had previously invited her to do).  But Stephen’s painful attempt to play the game with his new disability becomes too upsetting for both of them, and Stephen storms away.

Jane comes back to Stephen’s room.   While Stephen is angrily explaining why she must stay away from him, Jane suddenly blurts out: “I love you.”

Jane: I want us to be together for as long as we’ve got, and if that’s not very long, well then that’s just how it is.  It’ll have to do.

Jane: Your glasses are always dirty.

Jane takes off Stephen’s glasses, cleans them and puts them back on.

At this point, we see Jane’s determination.  She knows that marriage to Stephen will ultimately put her in the role of a carer, (and quite possibly a young widow) but that is something she is prepared to face because she loves him.  This is the point at which Stephen realises it too.  Although they have already had what would be conventionally considered a romantic moment (going to the student ball and watching fireworks from the bridge together) this is a moment of true love.

This is a wonderfully understated romantic moment.  In the simple act of cleaning Stephen’s glasses, Jane shows her acceptance of the caring role ahead of her, and her willingness to make sacrifices for Stephen’s sake.  (Even though, at that point, she has no idea just how hard that will be).  It is also a moment of intimacy, such as one sees with a husband and wife who know each other well, and all the more tender for it.  Towards the end of the film, the moment is reprised, now with bittersweet overtones.  But for now, it is a declaration of intent, as powerful as any other seen on screen.

Our romance-themed entertainment site is on a mission to help you find the best period dramas, romance movies, TV shows, and books. Other topics include Jane Austen, Classic Hollywood, TV Couples, Fairy Tales, Romantic Living, Romanticism, and more. We’re damsels not in distress fighting for the all-new optimistic Romantic Revolution. Join us and subscribe. For more information, see our About, Old-Fashioned Romance 101, Modern Romanticism 101, and Romantic Living 101.
Pin this article to read later! And make sure to follow us on Pinterest.
By Elizabeth Hopkinson on January 24th, 2015