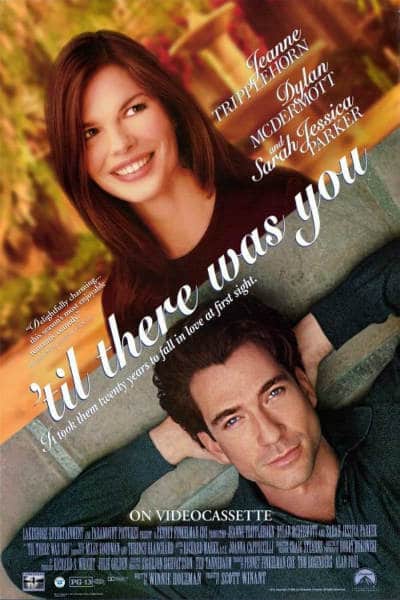 THE MOMENT: Their first meeting – finally!

’Til There Was You is a now twenty-year-old rom-com, starring Jeanne Tripplehorn, Dylan McDermott (just before those steely blues started wooing women weekly for eight seasons on The Practice), a pre-Sex and the City phenom Sarah Jessica Parker and Jennifer Aniston at the zenith of her Rachel hair.

Right from the start, as episodes from their respective childhoods flash on the screen, we know that Gwen (Jeanne Tripplehorn) and Nick (Dylan McDermott) are meant to be together. This is the whole premise of the movie – these two need to find each other. It takes a while before these two paths intersect completely.

Much of ’Til There Was You follows the architect Nick in his tempestuous relationship with the celebrity Francesca (Sarah Jessica Parker). Gwen is a writer and hopeless romantic, waiting for her love story/life to begin. She is so enamored with the idea of a beautiful love story that she often fails to see, really see, the fallible and less-than-desirable object of her apparent affections. She wants the narrative more than the man himself.

The film is schmaltzy at times. The critics panned it. Sarah Jessica Parker steals the show. But this examination of the construction of love narratives – as the film does – is rather compelling. That’s what’s stuck with me through the years after I first saw it in movie theaters two decades ago. How do we tell love, frame it? How do we control it and contain it and shape it and maybe even constrain it through our narrative constructions? What’s in a story? What’s been selected, glossed over, forgotten, highlighted?

Anyhow, all these ponderings aside, let’s get on with the lead in…

THE LEAD IN – The Whole Flippin’ Film!

This has got to be one of the latest cute meets on film. With only 3 minutes left before the film fades to black, our protagonists finally meet, really meet. For an hour and three-quarters, we’ve watched them nearly meet many, many times.

They literally bumped into each other in grade school, as Nick ran through the halls. She was a new student and transferred to another school shortly thereafter, so they never actually met.

At university, his architectural model fell from a windowsill, hitting the bench where Gwen sat composing a heartbroken poem after a breakup. They exchanged a few brief yelling words – he up there and she down there – though they never saw one another. In her haste to get away, she crammed all her papers into her bag, forgetting the heartbroken poem. Nick found the poem under his model and was moved deeply by her words.

In their current lives, Nick is dating the former child TV star, played by Sarah Jessica Parker, whose autobiography Gwen is ghostwriting. Gwen ends up getting involved in a bid to save an old building from destruction, a complete overhaul that Nick’s architectural firm handles. She writes many anonymous letters to the newspaper, words which haunt and irritate and move Nick deeply. He ends up quitting his job over the project in protest over the building’s demolition.

Nick’s child star girlfriend has left him and fired Gwen from the book. Gwen is still single and seeking her love story, although she is now confident enough to start putting her name to her work and has moved out of her parents’ guesthouse. They both continue to smoke, although they know they should quit.

THE MOMENT – A Light Ignites

Nervous about his first Nicotine Anonymous meeting, Nick ducks out to take one last drag on a cigarette before heading into the meeting. Walking down a dimly lit school hallway, he hears the striking of a match and turns in that direction.

There leans Gwen up against a wall, lit cigarette and match in hand. She invites him to share the light. As they share their last cigarettes, they stare into each other’s eyes. And we just know that it’s the beginning of something special – and it’s about time!

“First time?” Nick asks. And Gwen nods her assent. “Yeah, me too,” he rejoinders. She then gives her name, and when he says his, she starts. Nick has the same last name as a lost love of one of her ancestors (it’s a family story, told earlier in the movie, involving a cherished heirloom piano – did I mention that Nick plays the piano?). Story threads begin to weave right there.

And with a simple piano score accompanying them, they head into the meeting and peek looks at one another throughout. And as the piano segues into Van “The Man” Morrison’s smoky voice singing “You Don’t Know Me,” we see them after the meeting, the last ones there, lingering and talking and laughing… 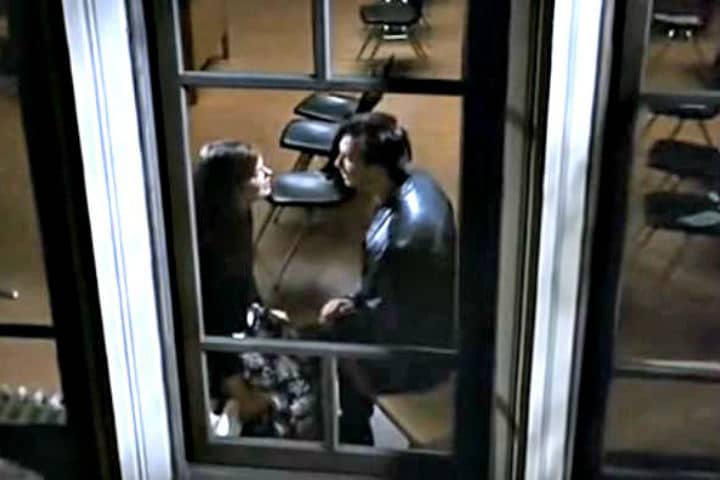 Gwen has found her love story at last.

RELATED: Romantic Moment of the Week: Linden and Holder Have an Old Hollywood Moment

Have you seen ’Til There Was You? What are your thoughts on the film? What’s your love story?

Our romance-themed entertainment site is on a mission to help you find the best period dramas, romance movies, TV shows, and books. Other topics include Jane Austen, Classic Hollywood, TV Couples, Fairy Tales, Romantic Living, Romanticism, and more. We’re damsels not in distress fighting for the all-new optimistic Romantic Revolution. Join us and subscribe. For more information, see our About, Old-Fashioned Romance 101, Modern Romanticism 101, and Romantic Living 101.
Pin this article to read later! And make sure to follow us on Pinterest.
By Jessica Jørgensen on June 3rd, 2017