THE FILM: Everything, Everything (2017)
THE PAIR: Olly (Nick Robinson) and Maddy Whittier (Amandla Stenberg)
THE MOMENT: Maddy experiences her first kiss.

Though they’re no longer marketed for my age bracket, once in a blue moon a YA novel comes along that somehow seems “special.” One of those novels is Nicola Yoon’s debut, Everything, Everything. Shooting onto the NYT Bestseller list, in the short time since its publication (2015), it’s not only garnered acclaim, it’s also been adapted into a film. Once news of the film dropped, I finally caved and read the novel that seemed to populate my blog feed (in a positive way).

Inside the pages of this uniquely composed story, we meet Maddy Whittier; a seventeen-year-old girl living with SCIDs. It’s a condition that, basically, means she’s allergic to the world… and to everything. Since the diagnosis (when she was still a baby), her constant companion has been her mother, who also happens to be a doctor. This changes the day he appears. 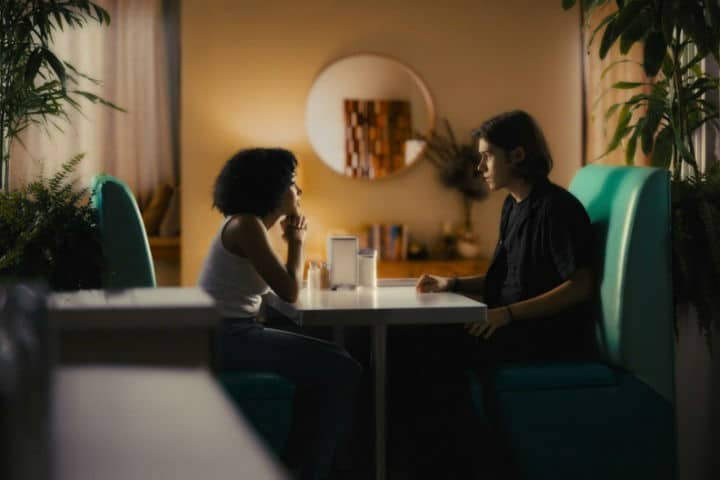 Clad in black, he is Olly Bright. Olly is the boy who, along with his family, moves in next door. Guarding family secrets that force Olly to act as protector, this boy is immediately drawn to his beautiful neighbor. A girl who, in many ways, mirrors a character from a fairytale as she remains behind the glass walls of her room. Eventually, the two begin texting, emailing, indulging in long phone calls, and IM-ing. All while keeping this knowledge a secret from Maddy’s overly protective mother.

The world shifts on its axis when, with the help of her devoted nurse, Maddy and Olly meet in person for the first time. Arrangements are made for him to visit her in her house… and more specifically, her favorite room.

RELATED | Everything, Everything (2017) – Best-Selling YA Novel Adapted in an Imaginative and Clever Way

Awkward stances, thoughts, and words rule their meet-cute. Olly stands across the room as he’s been sternly warned to do, lest he contaminate Maddy. Maddy stands at the door afraid to get too close to Olly lest she not meet his expectation of her. As they slowly warm to one another, as if pulled by gravity, they stand face-to-face.

It’s this meeting between Olly and Maddy that sets everything into motion. The next time Maddy has the house to herself, she invites Olly over. It’s Independence Day, and she wants to watch the fireworks with this boy who’s stolen her heart…

The Romantic Moment: Olly and Maddy

Once Maddy has casually convinced her mother to go to work, and an invitation to Olly has been issued, the night begins the same as their prior meeting. Full of awkward pauses and casual conversation, what the two don’t realize is the commentary running through their minds is the same. Both of them are feeling insecure.

Maddy worries Olly might think they have nothing in common.

Olly silently suffers a case of bad nerves (and is sure he’s more nervous than Maddy!).

Maddy wonders how Olly can be this cute… and smart!.

And on their internal thoughts race.

In reality, what the two don’t realize is they’re both in the same boat: they’re both letting awkward nerves get the best of them.

As they sit in Maddy’s favorite room (an office space with a floor to ceiling glass wall), Maddy decides to make a change. She walks to his side of the room and sits on the opposite end of the sofa. Finally, Maddy says, “This is an ellipsis.” 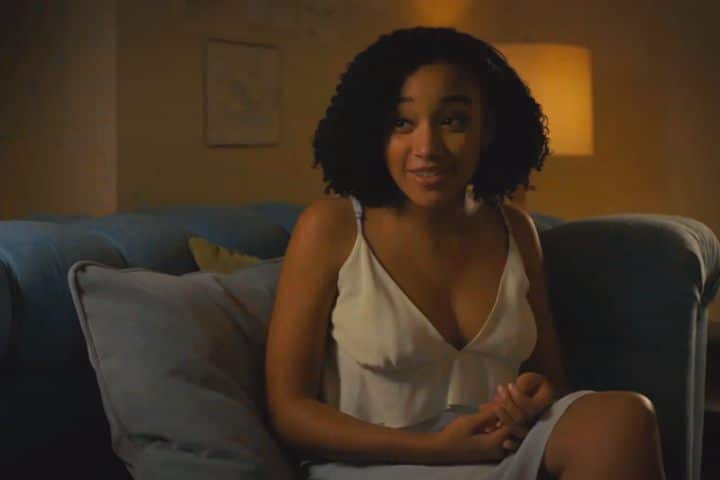 Curious, Olly replies, “Does that mean we’re having an awkward silence or that you’re thinking?”

“Both,” she replies quizzically.

She tells him it’d probably be best if they were just friends.

Glibly, he replies, “I don’t think you have that kind of restraint.” 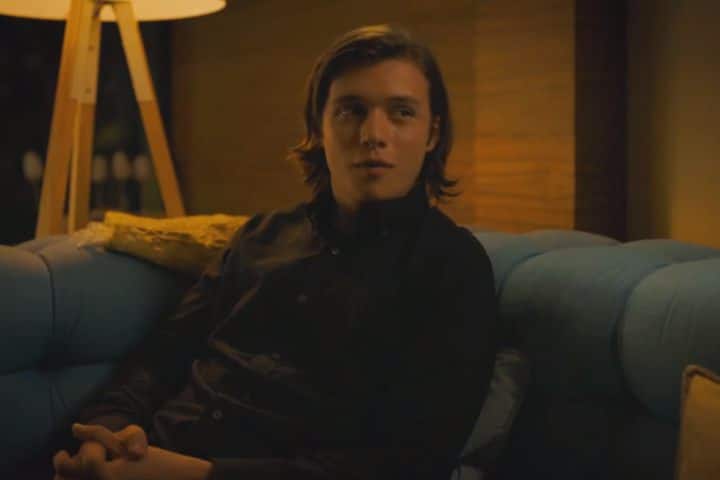 With a smile, Maddy tells him, “Well, my life is an exercise in restraint, so…”

To distract himself, Olly moves further away, and tells Maddy she makes him want to stay in Los Angeles. 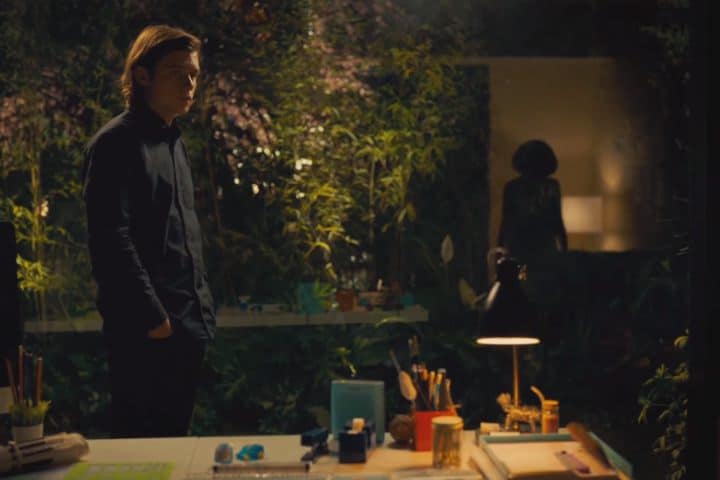 A mixture of shy and reservation, Maddy asks him why he’d leave.

By this time, Olly now stands in front of the window. Following suit, Maddy too stands.

“Moving closer to you,” she says with an unexpected confidence in her voice.

Concern coloring his voice, he wonders, “Is that okay?”

With a small smile, facing him, she says, “Yes, it’s okay.” Satisfied with her answer, she says, “I should tell you we shouldn’t push our luck, but I can’t. I don’t want to.” 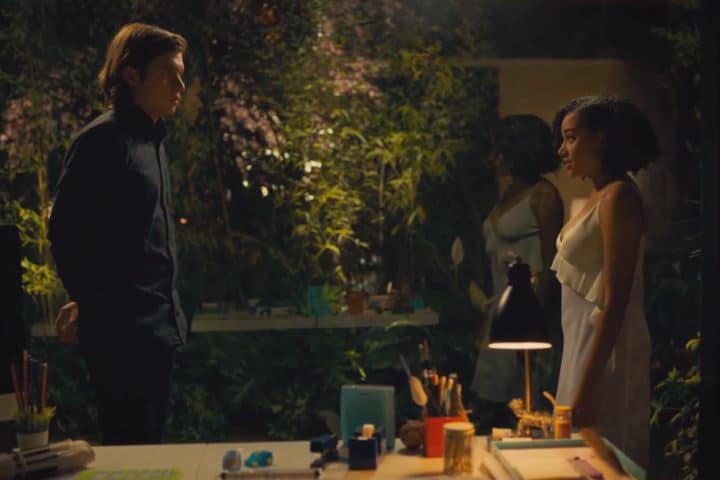 Still keeping her health and condition at the forefront, he persists. But she too is stubborn. She closes the space between them, and they lean towards one another.

Whispering, Maddy affectionately says to Olly, “Hello, Little Prince.” This a reference to one of her favorite books. 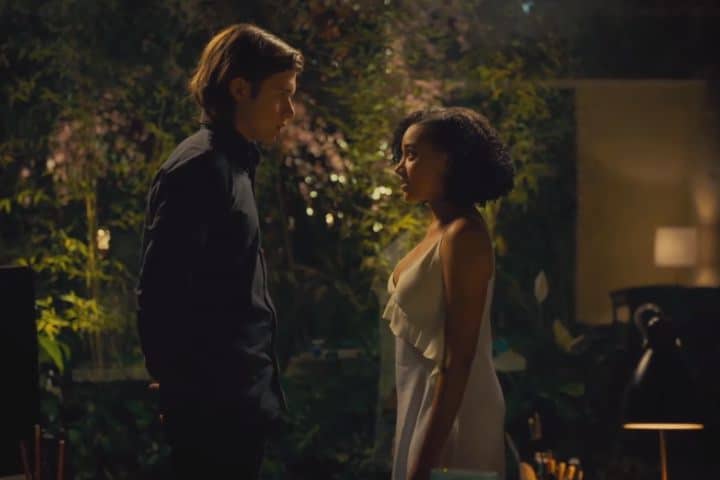 Like gravity, they’re pulled together where they meet for the sweetest of first kisses. 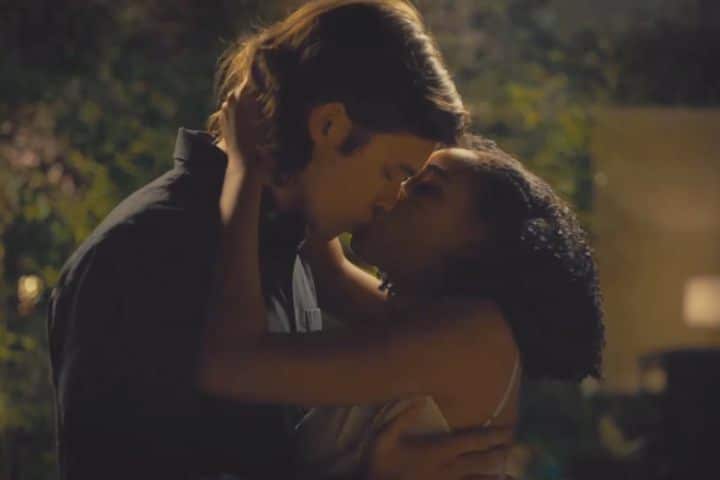 Breathless and starry-eyed, as they come apart, and stand there, Maddy asks, “Is it always like that?” 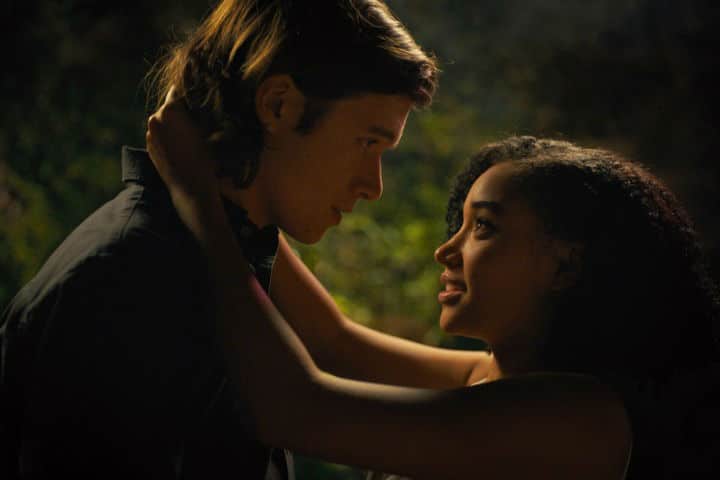 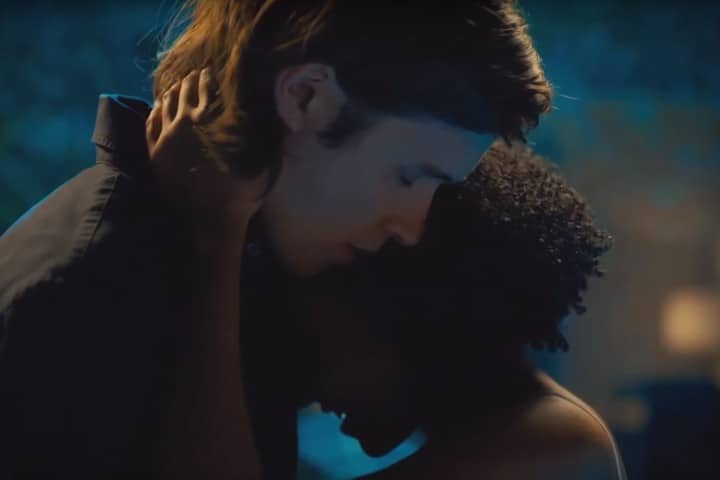 The young lovebirds remain in this state for another breath before the moment and their young love pulls them together again. Maddy leans into Olly, who gently holds her in his arms. Behind them (literal and figurative), fireworks explode in the night sky.

Much later, after they’ve parted, Maddy lies in bed, talking with a concerned Olly.

He’s checking in to be sure she isn’t sick.

Reassuring him she says she’s “Better than fine, actually.” With a wide, swoony smile she says she feels “pretty perfect.”

Over the phone, we hear him say “Even though we touched?”

As she lays there, we hear his voice follow up with, “Shared the same breath.”

Still in a state of dreaminess, her reply, “Yeah, we did.”

His one-word reply “Kissed,” inspires her to reiterate, “Like I said, perfect.”

They say goodnight, and as the magic of the scene and snapshot capture of a first kiss fades, we hear Maddy’s voiceover share the rest of her thoughts on this perfect moment with Olly, the boy next door.

I read once that we change the upper layers of our skin every two weeks. But some of our cells don’t renew. They age and age us. In two weeks, my lips will have no memory of kissing Olly.

But my brain will remember.

This isn’t the end of the love story between Olly and Maddy. It’s only the beginning of their adventure. But this moment is not only important to their relationship but Maddy as a person. Plus, as it should be, it’s also one of the most emotional first kisses in the cinema I’ve seen. The fact that it carries so much more emotional weight and importance (because of who Maddy is as a person) makes it all the sweeter.

Have you seen Everything, Everything? Did you read the book? Do you like the story and the romance between Olly and Maddy? What cinematic “first kisses” are among your favorites? Tell me about them down below, I’d love to chat with you all.

Our romance-themed entertainment site is on a mission to help you find the best period dramas, romance movies, TV shows, and books. Other topics include Jane Austen, Classic Hollywood, TV Couples, Fairy Tales, Romantic Living, Romanticism, and more. We’re damsels not in distress fighting for the all-new optimistic Romantic Revolution. Join us and subscribe. For more information, see our About, Old-Fashioned Romance 101, Modern Romanticism 101, and Romantic Living 101.
Pin this article to read later! And make sure to follow us on Pinterest.
By Rissi JC on October 14th, 2017

4 thoughts on “Romantic Moment of the Week: Olly and Maddy from Everything, Everything”