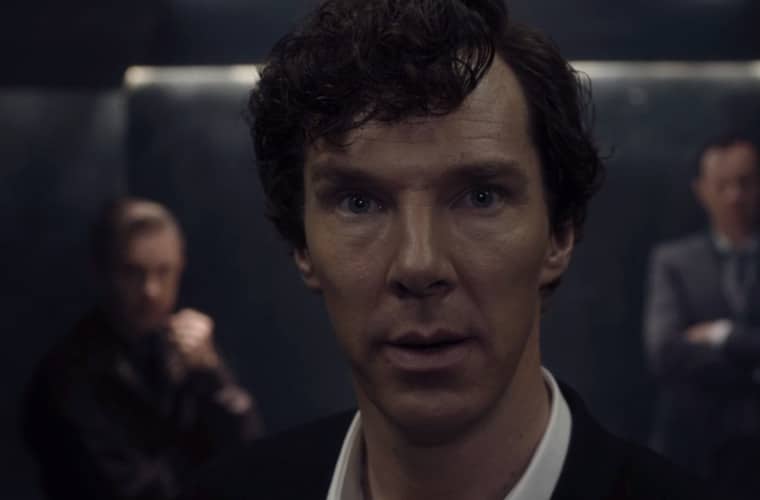 Spoilers ahead!
THE SHOW: Sherlock BBC (season 4)
THE PAIRING: Sherlock Holmes and Molly Hooper
THE ROMANTIC MOMENT: Sherlock and Molly are forced to make a romantic confession.

It’s hard to believe that seven years ago BBC’s new adaptation of the beloved Sherlock Holmes’ story premiered! For those who followed the show at the very beginning, the agonizing years of waiting for a new season of Sherlock paid off every time just three episodes finally aired. After all, who didn’t love the show that managed to be brilliant, fun and full of insane talent! Just looking at the Rotten Tomatoes ratings shows how highly BBC’s Sherlock has been esteemed by fans all over the world!

RELATED | Romantic Moment of the Week: Tom and Barbara

The story takes a delightful twist on the original tale by setting Sherlock Holmes in modern times. He’s a cynically self-proclaimed sociopath who gets his adrenaline high by solving complicated cases with his uncanny detective skills. Of course, he meets John Watson, a war doctor, who ends up sharing a flat with Sherlock and becoming his bestie despite how anti-social, unemotional and off-putting Sherlock can be. Sherlock’s difficult personality means that his list of friends is very limited – to that of his landlady Mrs. Hudson, a police detective, his brother, and Molly.

Molly’s and Sherlock’s friendship starts out as a mildly amusing one. She’s a specialist registrar doctor who works in a morgue. She has a very obvious crush on Sherlock, however, he’s the only one blind to it, and basically uses her willingness to help him all the time to help with his cases. It isn’t until A Scandal In Belgravia (season 2, ep 1) that Sherlock puts together that Molly likes him after he embarrasses her for obviously wrapping a gift for a guy she likes (not realizing who).

In a rare treat (because we all know how much Sherlock hates to be wrong or deal with emotional repercussions), Sherlock sincerely apologizes and gives Molly a kiss on the cheek. Later on, he declares that she matters a lot to him, more than she knows. Season three teases us to believe that Molly has moved on from Sherlock, only to find out her boyfriend looks way too much like Sherlock lol. The new couple doesn’t last long while Sherlock and Molly’s friendship remains.

Sherlock faces his hardest case yet as he battles wits with a psychopathic woman, Eurus, even more brilliant than himself. Trapped in a prison that she took over, Sherlock, John Watson, and Sherlock’s brother Mycroft move through room after room and face horrible moral dilemmas (kill a guard so Eurus doesn’t kill his wife, etc). Eurus shows no mercy to her victims, and Sherlock and his pals force themselves to keep moving through her death maze in hopes of stopping her and saving a child trapped on a plane.

After entering another room, Sherlock finds a coffin inside. Eurus orders him to deduce who the coffin is for. After his deductions, he realizes it’s Molly Hooper. Eurus threatens to blow up Molly’s flat, which she says she’s rigged with bombs unless Sherlock can get her to say three words in just three minutes via phone call.

And those words are I love you. 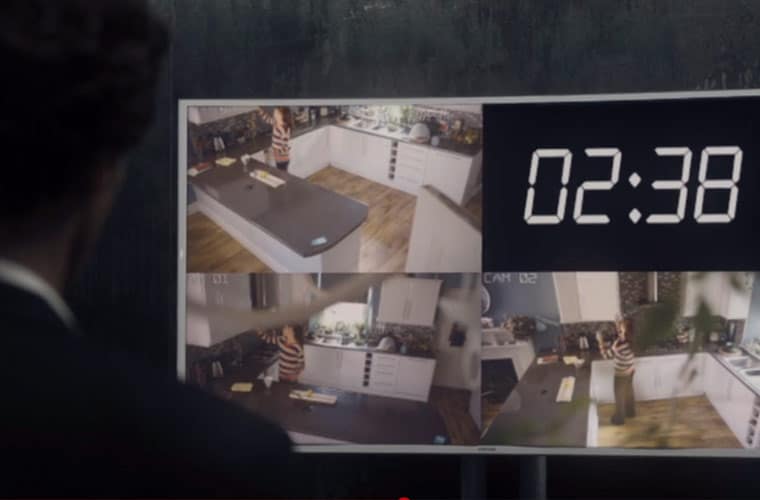 Eurus warns him that if he tells Molly why he’s really calling her, she’ll just immediately kill her. The game is on.

The Romantic Moment – Sherlock and Molly

Sherlock waits as the phone rings. Through a computer screen, he sees Molly in her house (secret cameras) in the kitchen. She sees Sherlock on her phone ID but doesn’t answer. 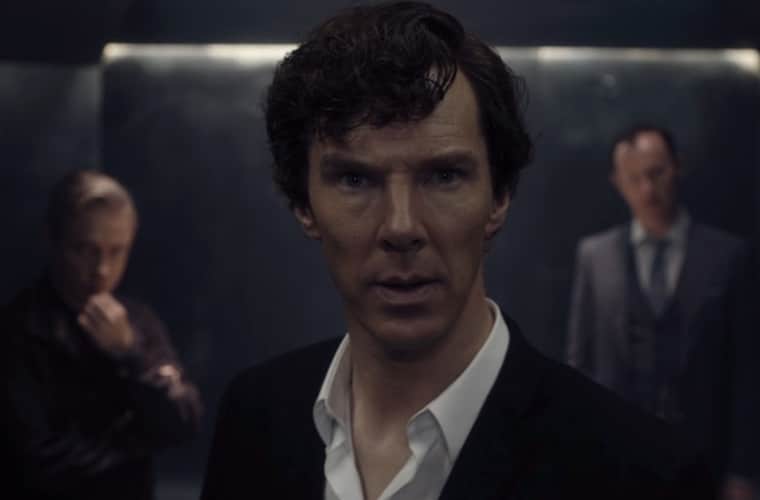 Sherlock, confused and tense, wonders aloud why she won’t pick up the phone – especially since it’s him calling.

The phone rings again and Molly reluctantly picks up. But she’s not in the mood and asks him if it’s important because she’s having a bad day.

Sherlock starts out as calmly as he can – he just needs Molly to do something easy for him, no questions asked. But Molly lets out an aggravated sigh. She won’t play another one of his games right now. He promises it’s not a game, he just needs help. But she’s still guarded and tells him to hurry it up when he hesitates. Finally, Sherlock asks her to please just say I love you.

Immediately Molly winces. “Leave me alone,” she retorts as she’s about to hang up.

Sherlock frantically begs her not to hang up on him! It’s a little over a minute now and they’re quickly running out of time.

Molly asks, with a mixture of deep hurt and resentment, why he’s making fun of her. She knows that he’s capable of doing just that, particularly from that Christmas when he embarrassed her for liking someone (which was him). 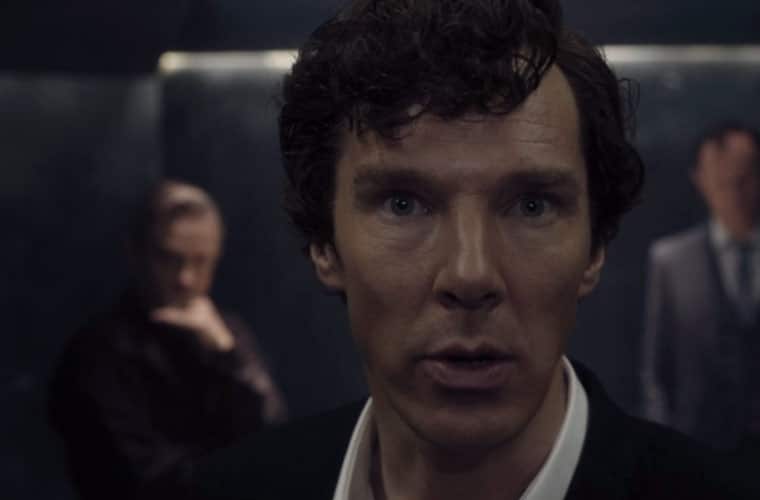 Sherlock forces his voice to soften, to sound calm, as he tries to make it sound like it’s only an experiment he’s working on, but Molly lashes back accusing him of calling her the experiment. Sherlock’s cool facade breaks. He agitatedly tells her she’s his friend. The countdown drives an emotional knife harder into Sherlock as he keeps asking her to just say those words.

Molly’s voice breaks. She can’t say it to him. He wants to know why and she tells him he knows very well why. She barely manages to admit that she can’t because it’s true. Sherlock coldly tells her to say it anyway.

The tables turn, though. Molly orders him to say it first and like he means it. Now Sherlock is the one at lost for words. 30 seconds left on the clock but he’s still hesitating. He closes his eyes and slowly says it – “I love you.”

13 seconds left. But Molly remains silent as she holds the phone close to her mouth. Sherlock begs her to say it. Finally, she whispers back, I love you. With 2 seconds left on the clock, they barely made it.

RELATED | Romantic Moment of the Week: Salmon Fishing in the Yemen – The Chetwode-Talbot Beauty

The phone call ends and Sherlock arrogantly tells Eurus that he did it; he saved Molly. But she reveals that she never put bombs in her place and now Sherlock must deal with all those complicated emotions that he strives to keep buried; things he never admits to anyone. Realizing Eurus won, all the built up emotions and realization of all that happened during the phone call crashes down on Sherlock. He finally breaks down and smashes the coffin in the room to pieces.

While this scene deviates from a traditional romantic moment in that Sherlock and Molly aren’t lovers, the emotional (and romantic) complications between this couple would make any fangirl a Sherolly shipper! This scene initially surprised me since I didn’t expect that the writers would add such a flagrant confession scene, but it remains my absolute favorite moment in season 4. It’s so full of repressed emotion and complicated, hidden feelings – and the actors pull off the intensity flawlessly!

Have you seen BBC’s Sherlock? What are your favorite moments between Sherlock and Molly? Let me know in the comments!

Our romance-themed entertainment site is on a mission to help you find the best period dramas, romance movies, TV shows, and books. Other topics include Jane Austen, Classic Hollywood, TV Couples, Fairy Tales, Romantic Living, Romanticism, and more. We’re damsels not in distress fighting for the all-new optimistic Romantic Revolution. Join us and subscribe. For more information, see our About, Old-Fashioned Romance 101, Modern Romanticism 101, and Romantic Living 101.
Pin this article to read later! And make sure to follow us on Pinterest.
By Faith White on July 8th, 2017

3 thoughts on “Romantic Moment of the Week: Sherlock and Molly”