If you haven’t watched Pitch, you are truly missing out!  Led by Kylie Bunbury, Pitch is an amazing portrayal of a trailblazing athlete breaking gender barriers on her own terms. Binge with caution, though; Fox has yet to renew this incredible, powerhouse gem of a show and the last episode of Season 1 aired in December. (However, TVline has renewal chances currently as a safe bet.)

Featuring one of the most diverse casts on network television, Pitch tells the story of Ginny Baker, the first female Major League Baseball player called up by the San Diego Padres. Ginny explodes onto the scene under intense scrutiny by the media, the public, and her teammates. She’s baseball’s newest phenomenon, a pitcher with a tricky screwball and the courage and grace of a seasoned pro. Her grit and determination capture the attention of Mike Lawson, team captain, and Padres catcher.

Off the field, it’s far more complicated. Ginny has a policy, one she applies to the entire team and to baseball: No dating ballplayers. Mike Lawson never had a policy. It’s safe to say, he never thought he would need one. In all of Major League Baseball, there is only one female pitcher and she just happens to be on his team.

These two are ridiculously perfect for each other, even if they don’t know it yet. For you Pitch fans out there, you know there are many incredible moments between Ginny and Mike that just set our hearts aflutter (um…how about that almost kiss?!?!). However, there was one incredibly sweet moment that revealed the depths of Mike’s feelings for Ginny before even he realized it. It doesn’t feature Ginny through much of it. Yet, it’s ALL about Ginny which makes this one of “Bawson’s” finest moments. Not to mention, a lovely moment of old-fashioned romance in a current TV Series.

Related Post: Pitch Review – A New Female Driven Show For Fans of “A League of Their Own”

The Lead In – Ginny and Mike

The Padres are on a rain delay and Mike convenes the team’s kangaroo court. A jar is filled with complaints involving errors on the field and clubhouse infractions. Mike sits as judge, jury, and executioner and passes judgment and fines. No one argues. Mike rules, the player pays up. It doesn’t take long before a complaint against Ginny is read. Mike pronounces Ginny guilty but Ginny isn’t just sitting back and taking it. She immediately states her case, pulling in another player, Omar, who backs her version of events.

Later, Omar confesses he lied. Omar is a blushing schoolboy as he stammers about how beautiful Ginny is. Mike is dismissive but Omar shakes his head and says he might have…..but he can’t finish his sentence. So, Mike finishes it for him.

“Feelings?” Mike ask incredulously before breaking into dismissive laughter. When Omar doesn’t laugh, Mike gets serious and gives Omar a dangerous look that borders on territorial. He orders Omar into his “chambers” along with another teammate, Blip Sanders, and Mike prepares to dress Omar down.

There’s an impatience about Mike as he immediately reduces Omar’s feelings to that of a crush. That impatience only grows when he asks Omar what he knows about Ginny and Omar can’t answer.

Mike can answer, though, because Mike notices everything about Ginny, whether he realizes it or not. The expression on Mike’s face speaks volumes as he stares at Omar. At this moment, you know what Mike is about to say is going to be unexpectedly personal.

In rapid succession, Mike starts telling Omar about Ginny and just a few of her idiosyncrasies he’s come to know since Ginny was called up:

“Did you know that she hums Katy Perry songs when she stretches, and not in key? That she loves grape soda and hates cilantro, and can spend almost a half hour explaining why?” 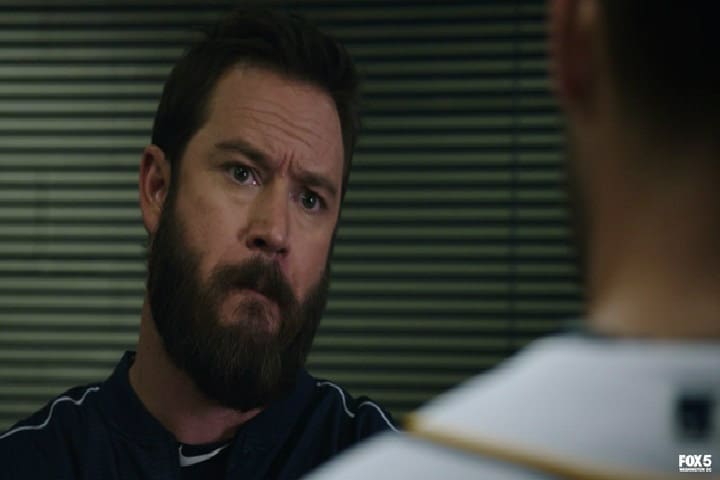 The look Mike gives Omar when he’s done is priceless. It’s arrogantly confident, filled with challenge and not a little bit of pride at just how well he knows Ginny. Poor Omar is a confused baby bird as he looks around wondering what just happened.

Mike isn’t done, though. Having feelings for someone isn’t just the way she looks; it’s about knowing and understanding the woman beneath the surface. The woman you begin to discover from talking to her and spending time with her, not just from staring at her from across the field or clubhouse. This is the woman that Mike is coming to know.

“I do because I’ve spent about a 100 more hours talking to her than you and I’m not falling in love with her. Blip goes back five years with her, back in the Minors with her. He’s not leaving his wife anytime soon for Ginny. You’re not in love because you don’t know her and she’s sure as hell doesn’t know you.”

Omar never mentioned love. He admitted to feelings but never specifically love, yet there it is, out in the open. There’s a quiet that falls between the three men but Mike is oblivious as he continues to stare Omar down. Blip studies Mike a minute before leaning over to ask, “Is that what she’s been humming when she’s working out? Katy Perry?” 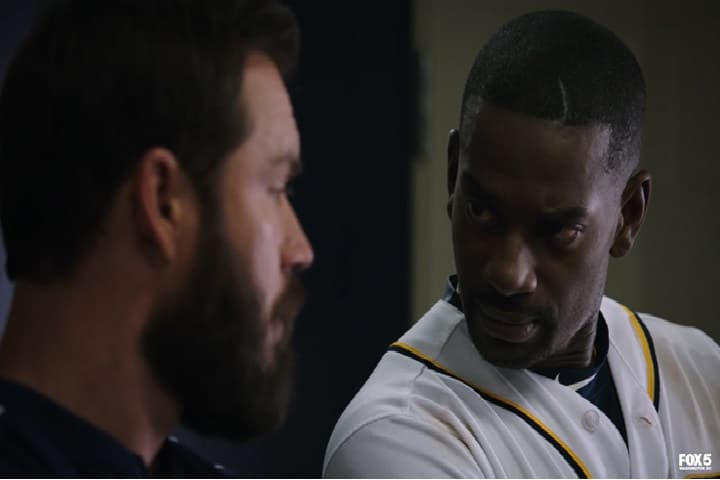 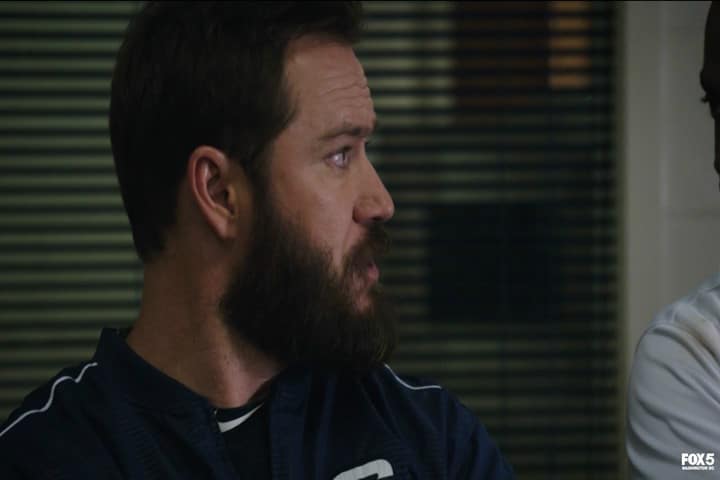 “That’s how off key she is but if you listen carefully it’s the worst rendition of Firework you’ve ever heard,” Mike replies without missing a beat. There it is, out there in the open. Blip and Omar know just how carefully Mike has been listening to Ginny’s humming. 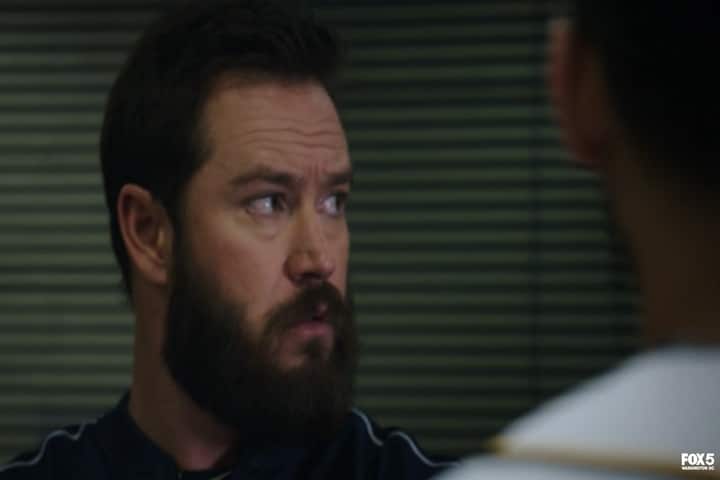 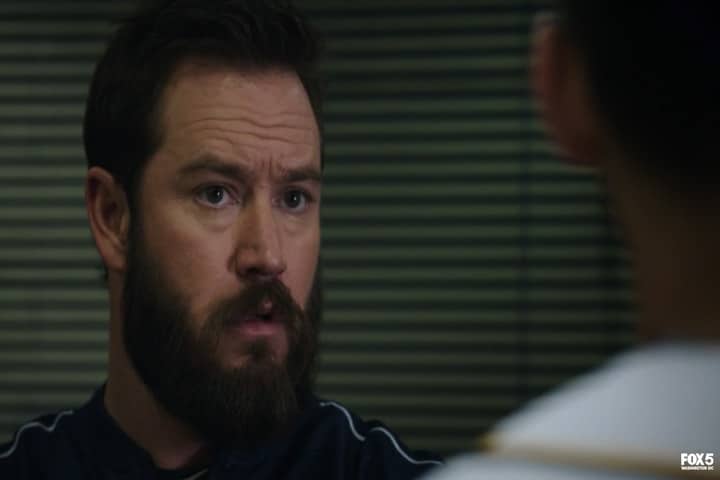 Another deafening silence. Mike grows flustered as he looks back and forth between Blip and Omar. Now, it’s Mike’s turn to be confuse. Slowly, it dawns on him that he said more than he intended. This man just spilled his heart all over the place without intending to because he has feelings. He scrambles to recover but it’s too late. Both Blip and Omar are beginning to wonder what exactly Mike’s “feelings” are and so Mike does the only thing he can do….he walks (read runs) away, leaving Blip and Omar staring after him.

Later, Mike finds Ginny in the warm up room, stretching.  He looks down at her and hesitates a moment before he gives Ginny exactly what she’d been looking for the entire rain delay – a strategy discussion on how to handle the first at bat.

Ginny doesn’t miss a beat and they fall into a familiar rhythm. When Mike turns to go, Ginny leans over to continue stretching and begins humming the worst rendition of Katy Perry’s “Firework.” 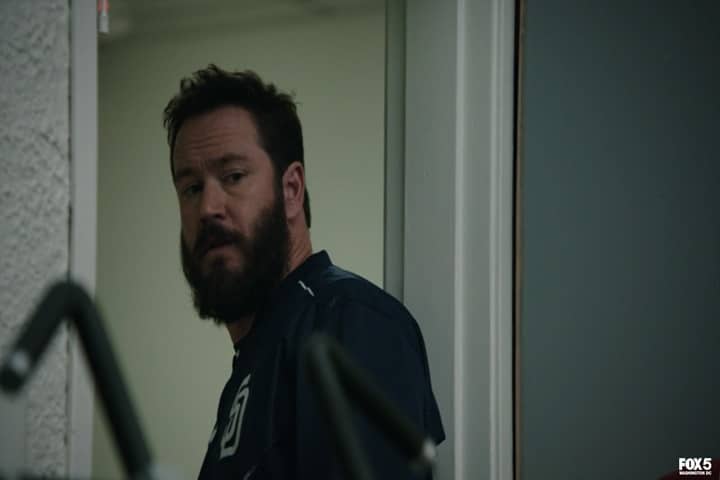 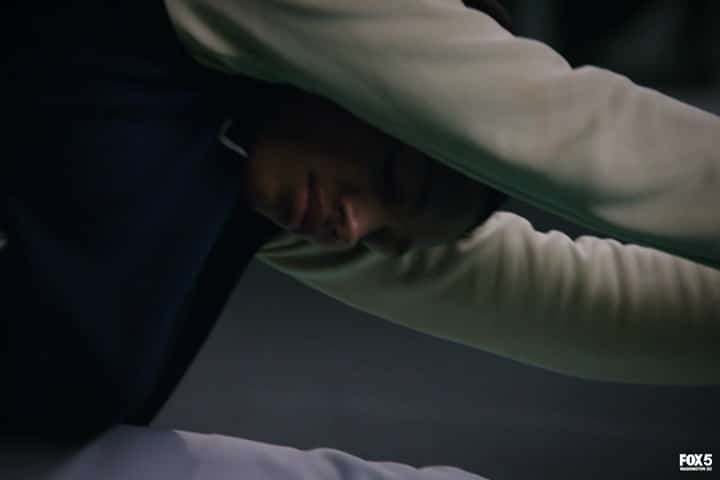 As Mike stares down at Ginny, a hint of a smile touches the corner of his lips and his expression becomes tender…and not a little bit dreamy. 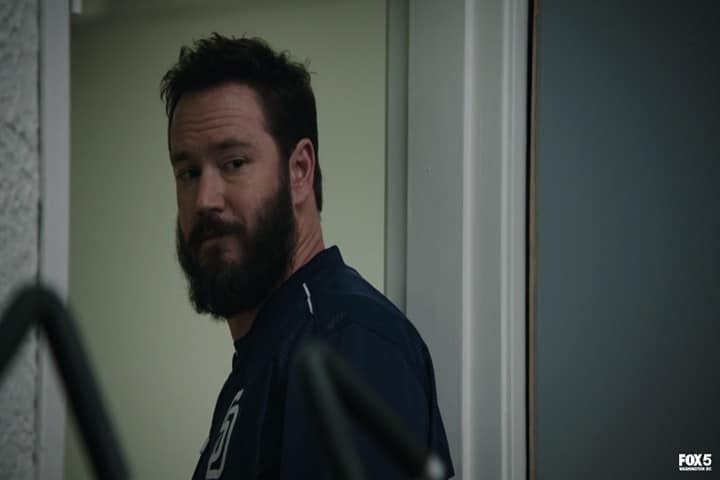 This is Mike.  And he has feelings for Ginny.

Did you watch Pitch as it aired? Are you a fan of Ginny and Mike? What did you think when Heart Eyes Lawson waxed poetic over Ginny?

Full episodes of Pitch are available on Fox OnDemand and Hulu.

Our romance-themed entertainment site is on a mission to help you find the best period dramas, romance movies, TV shows, and books. Other topics include Jane Austen, Classic Hollywood, TV Couples, Fairy Tales, Romantic Living, Romanticism, and more. We’re damsels not in distress fighting for the all-new optimistic Romantic Revolution. Join us and subscribe. For more information, see our About, Old-Fashioned Romance 101, Modern Romanticism 101, and Romantic Living 101.
Pin this article to read later! And make sure to follow us on Pinterest.
By Catherine on March 25th, 2017