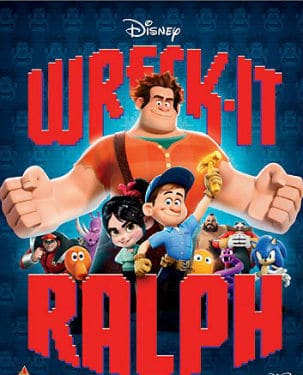 Welcome to Revisiting Disney! This week, we’re looking at a Disney movie that is a different type of story, Wreck-It Ralph!  Like always, I have labeled each category so if you want to skip to the parts that interest you most, feel free. And, of course, if you have any thoughts, burning or otherwise, please share in the comments!

Released on November 2nd, 2012, Wreck-It Ralph is another really fun animated film to come from Disney. People seemed to really like it at the time, and it was nominated for the Academy Award for Best Animated Feature in 2013. However, it would lose out to Brave (also a fantastic movie). Wreck-It Ralph was directed by Rich Moore, who would go on to direct Zootopia and work on Big Hero 6.

The soundtrack for Wreck-It Ralph is made up of a lot of popular music of the day. Like with Chicken Little before it, the music adds to the story but wouldn’t feel out of place playing on the radio (except for “Wreck-It, Wreck-It Ralph”). Some artists included are F.U.N., Kool & the Gang, Skrillex, Owl City, and Rihanna.

The music for Wreck-It Ralph fits the arcade game style of the film. When the games are being played, the music is bouncy and upbeat or appropriately serious (depending on the game). The sound effects also fit in wonderfully, giving the feeling of being in an actual game. I love how the characters move like arcade characters and make the same sounds that arcade characters make when they move.

During the times that the arcade is closed, the music manages to convey the wonder and whimsy of the story and its location, while also showing the horrible things that are happening in the story. When bad things happen, like the attacks by the cy-bugs, the music is serious and a bit darker. Overall, the score adds to the film in the way that all great Disney scores do, and also adds additional atmosphere.

The animation of Wreck-It Ralph is fun. The games are all introduced with the graphic quality an arcade game would have had when each one was created, so Turbo is a lower bit-size than Calhoun and her game. Ralph and Felix are somewhere between in the quality of their graphics, though only at times. When the story is following them, they are animated in a clear style. I don’t want to say 8-bit might get tiring after a while, but…. 8-bit might get tiring to look at after a while.

The different backgrounds and games are inspired by real arcade games, and some of them are actually real arcade games. Honestly, there wasn’t as much information on the animation of Wreck-It Ralph as on other later Disney films, which surprises me. I had expected to be able to find more out about it. Regardless, it’s a very cleverly animated film that has more in common with Tangled than with Chicken Little.

Wreck-It Ralph is a character in the popular arcade game, Fix-It Felix, where Ralph wrecks it and Felix fixes it. Tired of being underappreciated and hated by the other characters in his game, and despite the AA-like meeting for villains (where they remind themselves that just because they’re the villains, it doesn’t make them bad people. It’s in their programming), Ralph decides to prove to the others that he is a winner.

Hearing that he can get a medal there for climbing a tower and fighting bugs, Ralph sneaks away to the game Hero’s Duty to prove himself. With Ralph gone, however, his own game can’t work correctly. With no Ralph to wreck it, there is nothing for Felix to fix. When he realizes that Ralph is gone, Felix sets out to find Ralph and save their game before they’re unplugged.

Meanwhile, in Hero’s Duty, Ralph gains his medal but ends up fighting a cy-bug, the enemy of Hero’s Duty, as they fly right out of the game. Ralph finds himself in the racing game Sugar Rush and in the company of with Vanellope, a glitch who just wants to race. Ralph and Vanellope end up becoming friends; though Ralph is reluctant (he’s never had a friend before).

King Candy, ruler of Sugar Rush, refuses to let Vanellope race. The other racers also are mean to her, and destroy her racecar. Vanellope convinces Ralph to help her, but King Candy tells Ralph that it’s better for Vanellope and the game if she doesn’t race.

Calhoun, the leader of Hero’s Duty, and Felix have also entered Sugar Rush. Felix wants to get Ralph back to Fix-It Felix, and Calhoun needs to defeat the cy-bug that traveled with Ralph into Sugar Rush before it destroys the game.  As they travel, we see that Calhoun and Felix have a strange attraction, and the viewer is left wondering if they’ll ever work it out, coming from such different worlds and all.

Will Vanellope get to race? Can they all defeat the cy-bugs who invaded Sugar Rush? Will Ralph and Vanellope figure out where they belong? Can Ralph ever be happy as a bad guy? And what secret is King Candy hiding?

Wreck-It Ralph first became a blip on Disney’s radar in the 1980’s, when the idea to do an animated film about video game characters was born. It went through several drafts in the ’80’s and ’90’s, before it gained traction in the 2000’s. This was when Fix-It Felix became a main character. Also, it is interesting to note that the title changed from “High Score,” to “Joe Jump,” before settling on the title and characters we have today.

There were lots of Easter Eggs in Wreck-It Ralph. Mario is late for Felix’s party and Pac-Man is there, Ralph’s meeting has real villains from arcade games, and Sonic the Hedgehog is in the station as a PSA announcer. The movie seems to have been made by people who love arcade and video games, and it shows in the way the film comes together.

2012 was another year marked by tragedy. In December, a deadly mass shooting occurred at Sandy Hook Elementary School in Connecticut, a shooting that left twenty-six dead (many of them children). There was a second shooting at a midnight screening of The Dark Knight Rises, leaving fifty-eight dead. Additionally, Hurricane Sandy hit the East Coast of the United States and the Caribbean that year, killing over 175 people.

However, 2012 was also the year of Queen Elizabeth II’s 60th year as queen, the year that The Avengers premiered, that the Summer Olympic Games were held in London and that someone broke the sound barrier (without using a machine).

In other news, President Barack Obama was re-elected for his second term, the Space Shuttle Endeavor was brought to a museum in LA, the Transit of Venus occurred, China’s first female astronaut went to space, and, despite the fact that the Mayan calendar ended this year, the world did not end.

This year was one that I remember wanting to look at things from my childhood. Funny and nostalgic things, like a movie based on the Avengers, were really popular this year, and I think it was because when horrible things happen, people want to laugh about something else. Wreck-It Ralph hit the sweet-spot of funny and nostalgic, while still taking itself, its world, and its characters seriously.

From Wreck-It Ralph, I learned that you can’t hide or ignore what you are. Vanellope was programmed to be a racer, and she couldn’t do anything else. It was her purpose, and once she found it, she was unstoppable.

Secondly, you are not defined by your job. Ralph’s job was to wreck the building and the other villains also were not bad guys; they just had a job to do in their games. The villain mantra, “I’m a bad guy, but that doesn’t make me a bad guy,” is a fun one. I took that to mean that whatever my job may be, it’s not the only thing I am.

DOES IT HOLD UP?

Wreck-It Ralph is a solid action/adventure movie that has humor, heart, and trying to find your place in the world. The cleverly hidden (and not hidden) Easter Eggs to gaming and classic films, the animation, and the very catchy soundtrack make this a film worth seeing. Warning, you may cry a little.

For next week: Frozen

If you enjoyed this post and the others in the Revisiting Disney series, and have found yourself wishing that you could find them all in one convenient and bound book with eight extra essays, there is an option for you! Check out A Journey Through Disney: My Look Back Through Disney Canon, now available on Amazon as both a Kindle book ($4.99) and a paperback ($11.99).

Our romance-themed entertainment site is on a mission to help you find the best period dramas, romance movies, TV shows, and books. Other topics include Jane Austen, Classic Hollywood, TV Couples, Fairy Tales, Romantic Living, Romanticism, and more. We’re damsels not in distress fighting for the all-new optimistic Romantic Revolution. Join us and subscribe. For more information, see our About, Old-Fashioned Romance 101, Modern Romanticism 101, and Romantic Living 101.
Pin this article to read later! And make sure to follow us on Pinterest.
By Bailey Cavender on July 24th, 2016