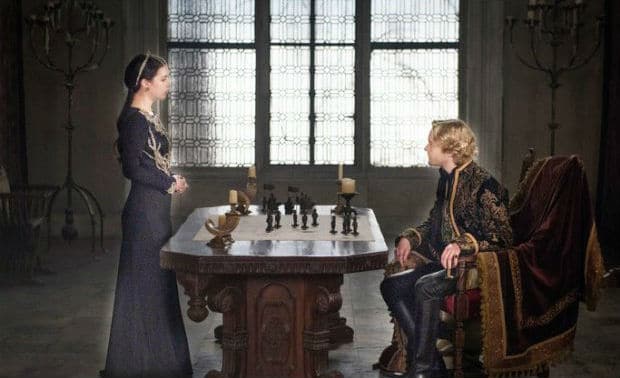 The penultimate episode of Reign Season 2 took us into a heady ride deeper into political intrigue and rulings of the heart. Queen Mary and her ladies have come a long way from the girls who arrived at the French court. Gone are the naïve girls and even as France is threatened by a revolution, the Scottish queen and ladies find a way out to save themselves in whichever way they must. As the castle is under Siege, there are some gruesome sequences tonight, though nowhere near as bad as the shocking betrayals. 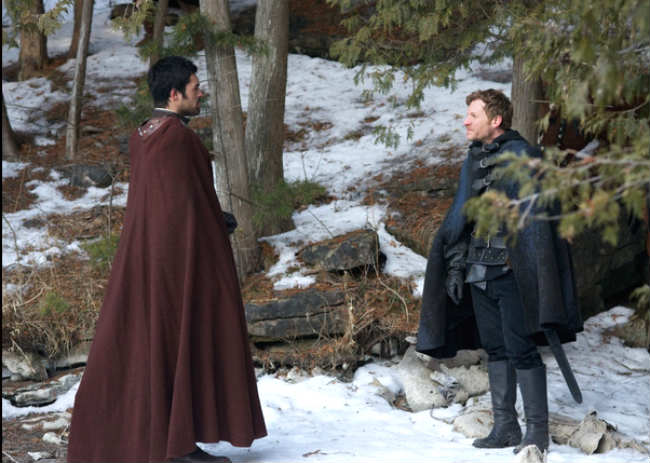 At the French court, Kenna (in a glittering pretty hair silver band) and General Renaude share a stolen kiss in the hallway. Their discussion only helps increase Kenna’s certainty to marry the General.

Dejected lover Leith, having his heart broken again by Greer, attempts to remain in control. I am indignant on his behalf. Greer is in some ways too practical for Leith and most probably won’t ever deserve his steadfast love. Princess Claude teases him about the upcoming nuptials. When Leith does not play along, she demands to know the details, but he isn’t in a mood to oblige.

Bash and Delphine share a heated moment in the woods after he is sufficiently impressed by her resourcefulness. He manages to convince her to accompany him back to the castle as there is a possibility she might be a good replacement to Nostradamus as the court seer. Once back, Kenna and Bash have an amiable conversation about annulment. Delphine, however, takes Bash off guard by the declaration that she foresees their future with kids. I for one agree with Bash’s uneasiness. The future was too sudden to be sprung upon us. Later, Delphine explains the discomfort as a feeling of helplessness that prophecies lead to.

The estranged royal couple continue to talk about the future of France and how Mary’s life is threatened by Queen Elizabeth and by the bad choices she has made in siding with Louis. Francis is nearing the edge of losing patience since he fears Louis is planning to stage a coup. Mary assures Frances that Louis could not possibly mean to rise as an usurper of the throne.

She is sadly mistaken as we soon see. Louis uses the General Renaude’s son, who was captured by the English, as leverage to gain his allegiance. With the General on his side, the uprising makes swift progress through the villages of France. Gaining confidence, Louis boldly sends a message to Francis about the impending war.

Possibly unaware of how dire the situation is, Catherine remains focused on Narcisse, presenting him with a treasured horse as appreciation of his loyalty. 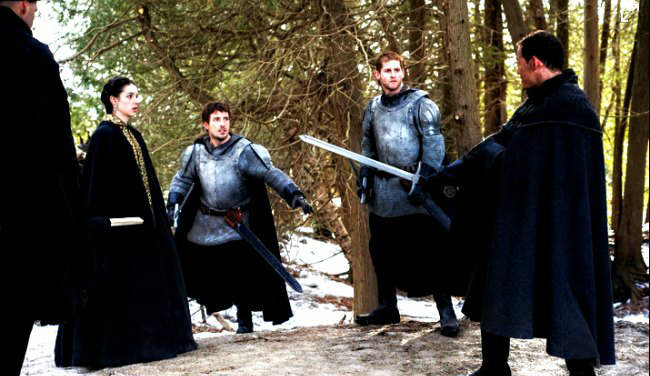 Within no time, the news of Louis’s plan reaches the French court. The women make haste as they prepare to leave the castle.

A forlorn Mary watches on as Francis bids Lola farewell. Their bond over their son has only strengthened with time. It is clear the son means a lot to Francis. He wants to make sure there is no doubt about the royal blood surging through the child in Lola’s arms.

Mary offers to remain by Francis’s side, but in a heartfelt moment the King refuses. He has failed her once, but now all he wants is to ensure Queen Mary’s safety. For all of his best intentions, the queen’s life is threatened again as her convey faces Louis’ men. Luckily, the soldiers were given orders not to harm Mary and she manages to flee having deciphered that the General has turned a traitor.

Mary returns to Francis with the disturbing news. Bash and Francis realize how short of time and resources they are.

In the meantime, Lola who has shrewdly guessed that it was Catherine who had a hand in Narcisse’s betrayal of their friendship, confronts him. She knows it is a charade he played to push her away. He does not disagree to the deduction. Instead declares how he would have cherished Lola if only he had a chance. An ominous looking maid looks on as the two hug bidding goodbye.

Leith helps lead princess Claude to the safety of hidden dungeons as the possibility of an attack looms closer. She thanks him and apologizes for her mean behavior. The unexpected kindness causes him to break down and confess Greer refused his proposal. Claude panics as some strange shadow flits close by. Could it be Clarissa roaming the hidden passageways again?

The general returns, but king Francis and Bash are ready and give him a tough fight. While Bash fights alongside with the other swordsmen, Francis expertly commands the archers in defense of the castle walls. His astute leadership and Bash’s valiant skill with the sword ensure a victory. You might want to close your eyes for a minute though as there is a hand chopped right off during the battle. Sadly, their victory is a temporary respite.

Kenna goes to confront the general, who is being held in custody, knowing in her heart he must not have had any affection for her at all. It might all have been a cover up to aide Louis. In his last hours, the general wishes to serve the rightful sovereign ruler, King Francis. If his information is to be trusted, then hundreds of French lords have rallied to side with Conde.

The maid who watched Narcisse and Lola embrace has whispered the secret into Catherine’s ears. Narcisse feels helpless as Catherine’s puppet, but Catherine declares it is all out of love for him. He has made her feel an equal and she has given her heart to him. How can ruthlessly controlling him be love, he counters. This only enrages her further and driven mad in jealousy and fearing a betrayal by her lover, she threatens to poison him.

In a highly macabre pagan ritual, Delphine makes love to a random man, covering him in blood. During the mating ritual it appears the man transforms into Sebastian. I am dreading to find out what all this means.

Meanwhile, Louis extends an offer to Francis to meet with him alone. When they meet, Louis assures Francis he wants to keep Mary safe. I wonder if Louis is simply naïve or overly optimistic. I tend to share Francis’s view of the matter. Queen Elizabeth will see Mary as a threat and have her assassinated. Plus, everyone says Queen Elizabeth is fickle minded so I don’t think it is a good idea to entrust Mary’s life to her. Then a severed head alert! You might want to look away at the callous throw of the bloodied head of a messenger. Louis had him and others killed. So there will most likely be help for France from King Phillip of Spain.

Francis valiantly refuses to surrender to Louis and returns.

He does confess to Mary that he would have surrendered if there was the slightest hope of her safety, as he is her husband as much as the King of France. Francis has been good to Queen Mary, but the last minutes are an unexpected betrayal of the highest order. Queen Mary leaves the castle alone and reaches Louis.

Mary Queen of Scotland wants to marry Louis of Conde. And not simply because of love, but also because she is carrying his child. Also,in a grand finale of Reign season two, a queen is set to meet another queen. What could Catherine be offering Queen Elizabeth?

What will this baby revelation do to Francis I shudder to think? What did you think of The Siege? Let us know in the comments below.

Our romance-themed entertainment site is on a mission to help you find the best period dramas, romance movies, TV shows, and books. Other topics include Jane Austen, Classic Hollywood, TV Couples, Fairy Tales, Romantic Living, Romanticism, and more. We’re damsels not in distress fighting for the all-new optimistic Romantic Revolution. Join us and subscribe. For more information, see our About, Old-Fashioned Romance 101, Modern Romanticism 101, and Romantic Living 101.
Pin this article to read later! And make sure to follow us on Pinterest.
By Rhea Sinha on May 8th, 2015