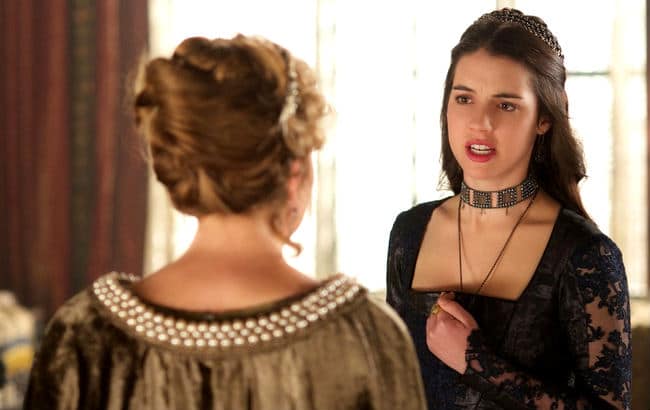 Reign Season 2 finale was all about choices. Catherine chose her bed of thorns, but knowing Catherine, she has most probably already found a way out. Kenna is off on a journey of her own, while Lola’s heart is falling for a special one. Wonder where that leaves Greer? Mary made a particularly difficult choice and was rewarded with undying love, or maybe we should not really term it as undying just yet. It was a fast paced compelling watch with a cliffhanger ending that has me already waiting desperately for the arrival of the new season.

The attack is delayed as Mary lets slip the information that Francis has canons which would make his side stronger in the war. It was not a pleasant sight at Conde’s camp as his men spent the night in debauchery, only to wake up to a spreading illness.

Back at the castle, Catherine continues to poison her son against Mary. Francis is clearly torn, unwillingly to give up on her. However, there is compelling evidence against her and Catherine’s arguments ring true.

Conde soon realizes something is amiss when he catches one of the girls raising terror by spreading a false pagan hoax. He confronts Mary and she stabs him. It must have been the most painful choice ever, but she is not a traitor to France. We had nothing to worry about! She lied about the baby, about everything. She did it all to get a chance to be close to Conde before the war and protect Francis. I have to admit this single act has increased my respect for Mary manifold.

Meanwhile, Bash cautions Francis that there might be more to Mary’s departure than what meets the eye. At that very moment, they notice chaos in Conde’s camp. Francis realizes this is the time to attack. As brave as ever he decides to lead the French Army in the war.

It was a quick decisive victory for the royal army. Francis enters Conde’s camp to see a stricken Mary kneeling next to the bleeding, unconscious man. He realizes what Mary has done for him. His happiness hides in the slight smile of wonder which reaches his eyes when Mary declares she has and always will love Francis. He is her husband and the king of France. She loves him more that she could ever love Conde.

The Fall of Catherine

I suspect it might have been because of Francis’s soft heart that he refuses to kill Conde. He claims to Catherine that he can use him as ransom and ensure the House of Conde lay no claims to the French throne. Catherine is not pleased with this decision as she believes a stronger statement must be made. Conde must be executed for treason.

Narcisse watches the exchange with interest, but keeps his distance until Francis receives the devastating news of his son’s death when Lola and the child were kidnapped. Toby Regbo portrayed the heart wrenching grief of a father mourning the loss of his son beautifully. Mary supports him as he breaks down hearing the news.

Narcisse knows the kidnapping can only be possible if someone from inside the castle is involved. He volunteers to search for Lola. Narcisse might be a hard man for others, but he does have an extremely tender spot for Lola. Soon enough, he is successful in her gallant rescue. She and her son have not come to harm.

He goes to Mary with the information, convinced it was all Catherine’s plot to hasten the execution of Conde. He is full of scorn for Catherine when he tells Mary that worse than being hated by Catherine De Medici is being loved by her.

It was a fascinating showdown as the young Queen Mary confronts the dowager Queen Catherine De Medici whose act was vile and brutal. She had her son believe her infant grandson had been murdered. All for the execution of a traitor. Catherine defends her actions as being necessary for a ruler. Mary is disgusted by Catherine’s love for such gruesome acts. Her time in court might have changed Mary, but her heart is still pure. She has caused bloodshed too, but never as the first resort.

Even though Catherine asks her to keep it as a secret, Mary takes the information to Francis who is heartbroken. He orders exile for his mother.

Catherine walks out of court with her head held high. She knows Narcisse was instrumental in exposing her, and spits right at his face as she leaves. Lola watches from afar. I am predicting this romance between Narcisse and Lola will have sparks flying soon. 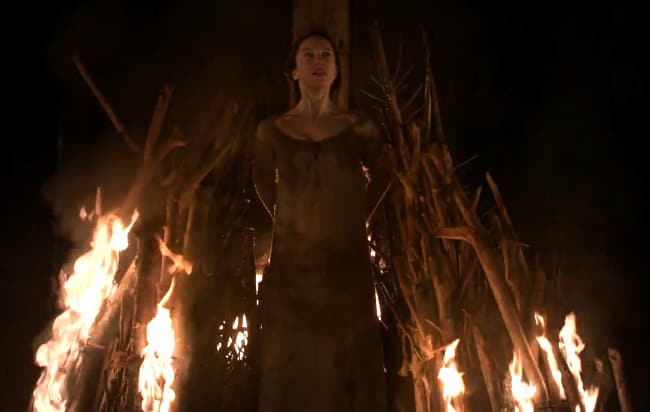 Throughout the episode, a parallel macabre track with Delfine was also in play. The usually astute Bash refuses to believe the rumors about her. Even when the servant boy claims that she was involved in a Pagan mating ritual, Bash chooses to believe in Delfine’s innocence.

Meanwhile, Kenna asks for a chance to reconcile with him. It did seem to fall into place a bit too easily for the couple. I had enjoyed their gradual acceptance of each other as husband and wife over the course of the show and rather miss their love story.

But, my hopes of a happy ending for Bash were crushed when Delfine tells him that Kenna is with child. It is the General’s baby and Kenna only wanted to give it Bash’s name. While she does have feelings for Bash, she clearly meant to trick him. He does not forgive her. Good for him!

Finally, Delfine is caught red handed with the servant lying dead and pagan symbols drawn all around his body. She continues to deny being a witch, but this time Bash cannot save her.

Later, in his dream the truth comes to him. The ritual has linked her to him. When the men tie her to a stake and leave her to burn, the flames creeping up to her burn Bash too. She is inside him and he will feel whatever she feels. I have absolutely no idea why Delfine has done this! Perhaps it is some crazed notion of love in her deranged mind.

She manages to escape, and that means we will be seeing more witchcraft and Pagan mystery next season. 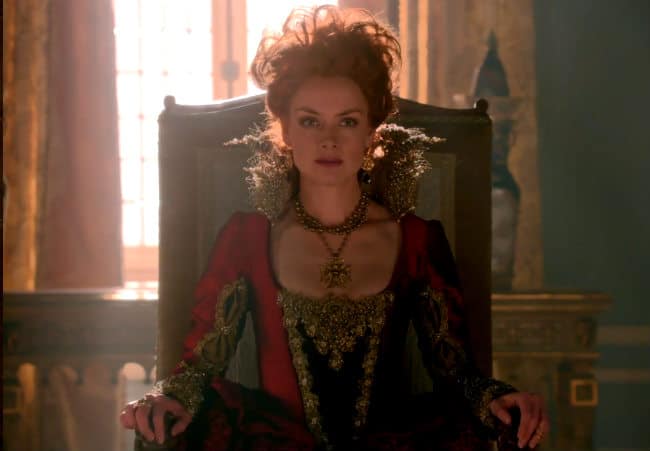 An English assassin manages to enter the dungeon and free Conde. We watch him ride away. Earlier, when Mary had met him in the cell, he had said he never really wanted the throne. It was all to please Queen Elizabeth and retain her protection. I wonder where his journey will lead him.

Close to the end of the episode, the four friends sit together near a French window. It is a symbolic scene emphasizing how the girls have quickly grown into women in the seductive temptations and constant dangers of the French court. Their bond of friendship grows deeper with time. That does make me happy.

Kenna is going to be a mother. She is to be shipped off to a far off couple so that she can have her baby there and return with no one wiser. On the journey, she will be with a young gullible soon-to-be king. She starts to charm the boy who is quite smitten by her beauty and interest. Kenna will remain Kenna!

I had to cheer as Francis and Mary finally had a chance to talk alone. And it was a lovely moment. Francis realizes how hard it was for Mary to lie to a person she loved. He forgives her. Mary reiterates she has always loved Francis more. She no longer wants to let the politics and grudges keep them apart and finally the two come back together.

Mary is blissful and carefree as she lies in his safe arms, but the camera swerves to a pensive Francis. We soon find out why. He visits Nostradamus (who is still in court?!). We come to know Nostradamus’s prophecy is coming true and Francis is dying. I am going to be heartbroken if something happens to him.

There is no time to be sad, however, because Catherine De Medici has reached the English court. A lot of dazzling red and gold greets our eyes, as does the willful, and rather young, Queen Elizabeth. As he was dying the General had said the English Queen has a personal feud with Mary. Now, Catherine is here to aid her in the destruction of Queen Mary. It promises to be an exciting Season three of Reign.

Were you shocked that Francis is dying? Do you think Catherine will plot against France? Let us know in the comments below.

Hope to see you soon!

Check out our other TV RECAPS!

Our romance-themed entertainment site is on a mission to help you find the best period dramas, romance movies, TV shows, and books. Other topics include Jane Austen, Classic Hollywood, TV Couples, Fairy Tales, Romantic Living, Romanticism, and more. We’re damsels not in distress fighting for the all-new optimistic Romantic Revolution. Join us and subscribe. For more information, see our About, Old-Fashioned Romance 101, Modern Romanticism 101, and Romantic Living 101.
Pin this article to read later! And make sure to follow us on Pinterest.
By Rhea Sinha on May 16th, 2015