The Red Turtle is an animated Robinsonade, a castaway tale of a shipwrecked man’s life on a deserted island, à la Defoe’s literary classic, Robinson Crusoe. The film is an international cooperative effort, uniting the talents of animators in France and Belgium, writers in Holland and producers in Japan. Japan’s famed Studio Ghibli co-produces, while the Dutch animator Michaël Dudok de Wit co-writes and directs. It all combines into an engaging and deeply meditative look at the nature of existence.

A Man on an Island and a Folktale

A man washes ashore on a fertile deserted island. Here, he finds fresh water, fruits, bamboo woods, fish in abundance. But still, he seeks to escape, building raft after raft. Yet, every time he sails just past the reef, something under the water repeatedly rams his raft to pieces. During one of the attempts, as he falls into the water, he sees a giant red turtle.

Meeting later a giant red turtle on the beach – we never know if this is the same turtle – his frustrations erupt in an explosion of violence. He attacks the turtle, leaving it for dead. But his conscience nags at him, and when he returns to ascertain if the turtle is truly dead, he finds an unconscious, red-haired woman inside the turtle shell.

And the story goes from there – a story about the life of this turtle woman and this stranded man on a little island in the vast oceans. It’s a story of their mutual forgiveness, their love, and devotion, their life together. They never speak. There’s no dialogue in this film. Just sounds of waves lapping and gulls calling and crabs scuttling. There are a few guttural grunts and such, but otherwise, no language.

The Sounds of Silence

It’s surprisingly freeing to watch a language-free film. In this post-modern age of incessant talk and chatter and Twitter and talking heads and opinions and more opinions, well, The Red Turtle is just such a beautifully peaceful reprieve. There’s a meditative stillness to the film, something that often characterizes Studio Ghibli’s films. So, while the animation is decidedly not Studio Ghibli – though still very stunning – the feel of the film is very much in the Ghibli vein.

And the handling of love is also very much in line with Studio Ghibli’s. There is no romance per se, just a steady and silent bond – a marriage – built on mutual respect, tolerance, acceptance, and forgiveness.

The Red Turtle is a lovely film, a still film, that in its stillness examines what it is that makes life worthwhile. Cutting the chatter and all the busy, superfluous extras, it shows basal human connection in all its touching poignancy. Two people together, living and loving, a turtle woman and a shipwrecked man. The silence is touchingly telling. 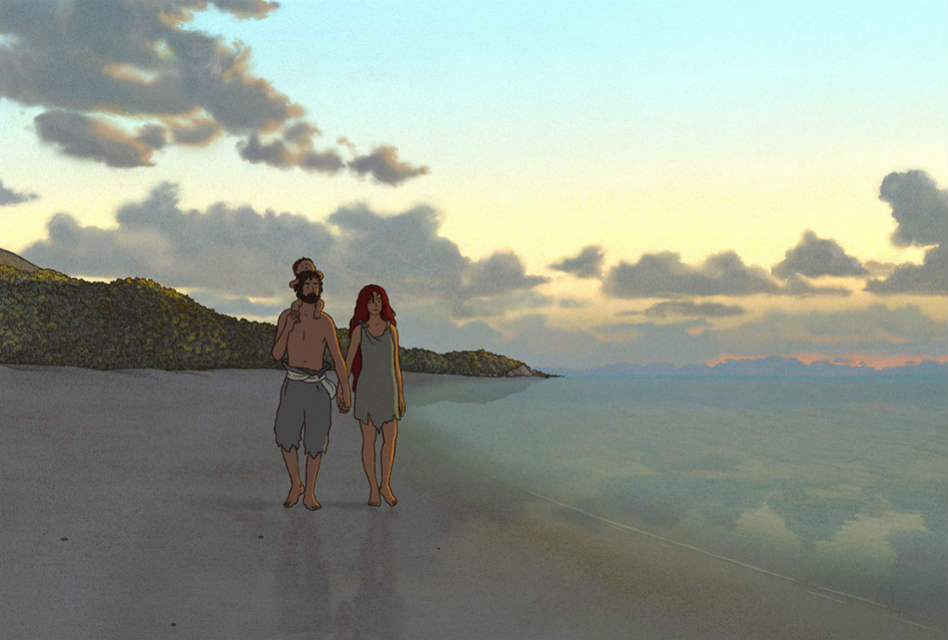 Where to Watch: You can watch on STARZ, stream on STARZ on Amazon Channels, or rent and/or buy. You can buy on Amazon.

Our romance-themed entertainment site is on a mission to help you find the best period dramas, romance movies, TV shows, and books. Other topics include Jane Austen, Classic Hollywood, TV Couples, Fairy Tales, Romantic Living, Romanticism, and more. We’re damsels not in distress fighting for the all-new optimistic Romantic Revolution. Join us and subscribe. For more information, see our About, Old-Fashioned Romance 101, Modern Romanticism 101, and Romantic Living 101.
By Jessica Jørgensen on January 18th, 2018