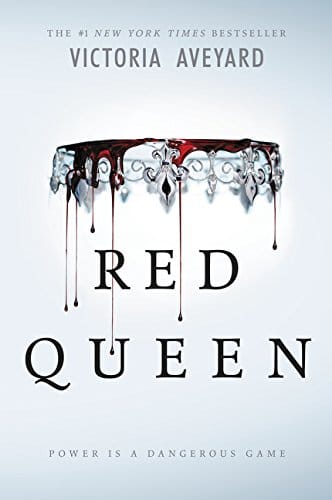 When I first picked up Red Queen I was certain it would be high fantasy. All signs pointed to high fantasy; the summary on the back cover, the reviews, everything, right down to the descriptions of the world. A high fantasy world, in which people with magical powers ruled over those who didn’t

RELATED YA Review: Rook is A Rip-Roaring Romance!

Then Mare Barrow and her father started talking about electricity rations.

The book has the taste and feel of a high fantasy novel but is really a dystopian, X-Men-esque story. It bridges the gap between the two genres. I stared at the book in shock for at least three minutes.

Like many books, Red Queen by Victoria Aveyard has both good and bad things about it but the good so much outweighs the bad it hardly matters.

The society is divided into 2 groups: those with red blood and their silver overlords and those with silver blood and magical powers.

Mare Barrow, our heroine, has red blood. She is a plucky and intelligent young woman, like most YA heroines tend to be. She starts the novel as a thief stealing whatever she can from the other “reds” in her town to provide for her family before she is to be conscripted into the army and sent to die at the front. Then a series of disastrous events lands Mare in the silver palace, pretending to be a long-lost silver princess.

The book is filled with politics, court intrigue, and super powered fights. It’s perfect for anyone who loves high fantasy, superheroes, and action. But don’t fret if that is not your thing. Red Queen is chock-full of romance. It isn’t just a love triangle but a love parallelogram, or maybe a love circle spinning around Mare Barrow. Normally I detest multiple love interest storylines but Victoria Aveyard weaved this one together so carefully I could hardly object. By the time I realized what was happening, it was too late to go back. The way Victoria Aveyard does it…well, I don’t know how to explain it without giving away all of the surprises. What I liked most about it was the fact that the love stories did not drive the book and Mare’s conflict was more about betraying her people than choosing which boy she liked better.

Overall, Red Queen is a fabulous, thought provoking read with an end that will leave you gasping for breath and reaching for the next book.

As far as adaptations go, I would watch this as a film, so long as it was directed well. There were a lot of scenes that could easily be montaged or cut for the sake of time, even though they make the book a little richer.

(This one was tougher to decide on. Like true romance it was multifaceted, and knowing what happens fogs my judgment. I want to give some parts only two hearts while others get five. So I’ll split the difference.)

Our romance-themed entertainment site is on a mission to help you find the best period dramas, romance movies, TV shows, and books. Other topics include Jane Austen, Classic Hollywood, TV Couples, Fairy Tales, Romantic Living, Romanticism, and more. We’re damsels not in distress fighting for the all-new optimistic Romantic Revolution. Join us and subscribe. For more information, see our About, Old-Fashioned Romance 101, Modern Romanticism 101, and Romantic Living 101.
Pin this article to read later! And make sure to follow us on Pinterest.
By Katrina Daroff on April 27th, 2016