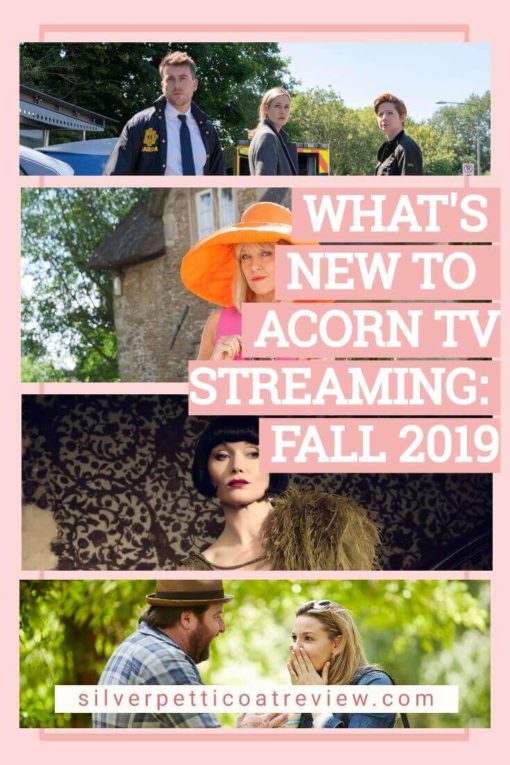 What to stream this Fall on Acorn TV!

Certain production companies and networks consistently put out good television. One of these is Acorn, a streaming company bringing us many of our favorite Australian and British shows. Some of them you might know and include The Hour, A Place to Call Home, Queens of Mystery, and more recently, My Life is Murder. As a fan of their programs, we take a look at the fall 2019 Acorn TV schedule (consisting of both old and new content) you can find on Acorn’s website.

RELATED | ‘MY LIFE IS MURDER’: WHY YOU NEED TO WATCH THE FUN NEW ACORN TV SHOW

Below, we share the titles of the shows you can binge, some of which are returning for subsequent seasons, and straight from Acorn TV publicity team, we share the synopsis below for each series. There are crime dramas described as “gripping,” some comedy, and the return of a sassy detective.

Without further ado, read on to discover what’s on the fall 2019 Acorn TV schedule.

In Dublin, a young Nigerian girl, Esme Lukasa, is found dead at a bus stop opening an investigation into her violent death. This leads Inspector Jen Rooney (Lynn Rafferty, Love/Hate) and her team of investigating detectives to a Direct Provision Centre for asylum-seekers. It is soon discovered that another girl from the center has disappeared.

The police enter a murky underworld of slumlords and traffickers to find out who killed Esme and rescue the missing girl before she suffers a horrific fate. Also starring Brian Gleeson (Phantom Thread, Logan Lucky). (6 EPS, 2018)

One of the most popular UK series worldwide returns with eight new episodes. BAFTA winner Martin Clunes (Manhunt, Arthur & George, Men Behaving Badly) returns in his uproarious lead performance as a tactless, self-centered, and uptight doctor in the charming town of Portwenn, where he clashes with the village’s quirky inhabitants. Co-starring Caroline Catz (Murder in Suburbia) (8 EPS, 2019)

This is the story of a second chance that life offers to Fausto Morra (Alessio Boni), a family man who owns and runs a large farm near Turin. Fausto, involved in a car accident, fell into a coma. When he wakes five years later, he discovers that everything has changed: his wife is now in a relationship with his best friend, his children have grown up and his business is on the verge of bankruptcy.

He also discovers that there are shady aspects to his life that he can’t remember at all, but if he wants his life back he has to fight to recover his memory and come to terms with his past, only then he will start to find his road… back home. Co-starring Lucrezia Lante della Rovere and Sergio Rubini. (12 EPS, 2017, Italy)

This stylish and sexy period mystery stars Essie Davis (The Babadook) as Phryne Fisher, a thoroughly modern woman operating in a mostly male world. Set in 1920s Melbourne, the series follows the glamorous lady detective as she goes about her work with a pistol close at hand and, more often than not, a male admirer even closer.

The series follows Raisin, a London PR whizz turned amateur sleuth, whobecomes entangled in mischief, mayhem, and murder when she opts for early retirement in a small village in the Cotswolds. Drawn into various mysteries, Agatha attempts to solve the crimes… often in rather unorthodox and amusing ways.

In Series 3, Agatha Raisin is on the verge of a new era; reconciled with James Lacey and launching her own detective agency. However, when the agency fails to attract any clients, James suggests they investigate a legendary haunted house as the perfect opportunity to drum up business. No one was expecting their first case to be quite so spooky.

In the third season of this humorous and heartbreaking medical drama, this hospital located in a colorful coastal town in southern India is busy as ever, with several big new arrivals causing a stir. The team faces their most shocking case yet when one of their own nursing team survives a violent attack. Dr Ruby Walker faces a tricky dilemma over where her home lies – with her new found Indian family, or at the bustling hospital? It’s made all the more difficult by her simmering relationship with Dr Gabriel Varma.

Series three also introduces us to a visiting Brit, Ted Dalrymple, an older man on a mission to find a love from his past. The series goes to darker places than ever before, but it is through the bonds of family and friendship – rekindled and strengthened over the series – that the team weather their biggest challenges yet. The series’ cast includes Amrita Acharia (Game of Thrones), Amanda Redman (New Tricks), and Neil Morrissey (Striking Out, The Night Manager).

Plus, you will also be able to find the following series on Acorn this Fall.

This compelling series starring Claudia Karvan (Newton’s Law, Love My Way, The Secret Life of Us), Shane Jacobson (Jack Irish) and William McInnes (Blue Heelers) follows the lives of an Australian extended family in inner-city Melbourne through a variety of ups and downs. Aged in their thirties and forties, the characters are occupied with career advancement, home ownership, child-rearing and relationship dynamics. (13 EPS, 2013)

This brings us to a conclusion of this seasonal Acorn TV preview! Have you seen any of these? (I’m most excited about new installments to the Agatha Raisin series!) Do you use Acorn’s streaming service? Do you want to see any of the fall 2019 Acorn TV offerings? Tell us about your favorite series available on Acorn TV (and which ones I should check out first)! I’d love to know about your favorites.