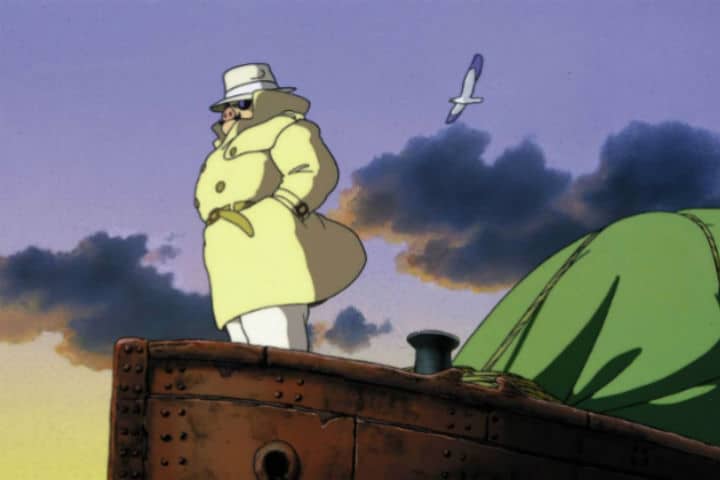 I adore the films made by Studio Ghibli. Ever since I saw Spirited Away, I was captivated by Director Hayao Miyazaki’s ability to take his audiences on magical adventures. Even his more realistic films like The Wind Rises manage to draw the viewer into the world of the film. I thought that Spirited Away was my favorite Studio Ghibli movie, but then I saw Porco Rosso, and now I’m not sure.

Released in 1992, Porco Rosso is set in the 1930s in the Adriatic and tells the story of a fighter pilot who has been turned into a pig. Porco is a genius pilot and has always been that way from the very beginning of his career. He fought in the Italian Airforce during World War I and at the time of the movie works as a bounty hunter, chasing seaplane pirates and saving their victims. He spends most of his time alone or at the Hotel Adriano, owned by his childhood friend Gina. 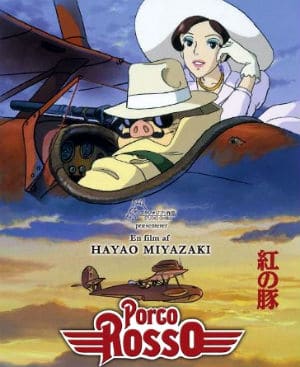 Since Porco spends a lot of time beating the seaplane pirates, they hate him. Determined to outsmart him once and for all, they hire an American pilot, Donald Curtis. During an air battle with Curtis, part of Porco’s plane flies off due to some mechanical troubles. Curtis claims he has defeated his rival.

Despite the rumors of his death, however, this is not true. Porco has gone to Italy to see his mechanic, to the chagrin of Gina. You see, Porco had deserted the Italian Airforce and they are always after him, especially when he visits Italy. Gina knows this and is not happy with Porco’s decision. As it turns out, she is right to worry.

While in Italy, Porco meets Fio, the granddaughter of his mechanic. She is young, idealistic, and a talented engineer. When the Italian Airforce closes in, Porco escapes Italy but finds himself with an unexpected passenger. Young Fio has decided to come along. Adding Fio into his life means that Porco has to make some adjustments to his bachelor life. He does, complaining the whole time but he also finds himself laughing and enjoying the company more than he had expected.

The seaplane pirates are still out there, however, and are determined to end their conflict once and for all, using Curtis as their muscle. Curtis, however, is smitten by Gina, but her heart is taken by an old friend. Realizing the truth about who Gina loves, Curtis is even angrier at Porco. This continues, even though Curtis later finds himself smitten with Fio. Meanwhile, the Italians are still chasing Porco as Porco and Curtis agree to a final fight, with the fate of Fio in the balance. Who will win the ultimate showdown between Porco and Curtis? Can Porco avoid the Italian Airforce? Will Porco ever become human again? Will Gina and Porco live happily ever after? What will happen to Fio? Most of these questions will be answered in Porco Rosso! 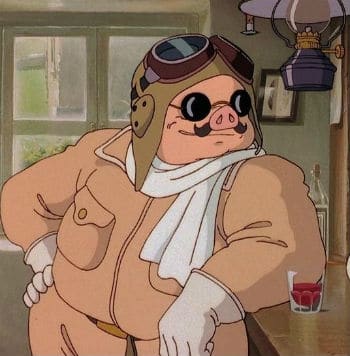 Porco, or Marco, is a fascinating character. As the story unfolds we learn more about his past. Even in the first ten minutes, we learn that he is not afraid to speak his mind. Pig-headed, at times unpatriotic, and somewhat selfish, Porco has embraced the fact that he is a pig. His experiences in the War seem to have colored how he feels about people, including himself. At one point, he tells Fio that all middle-aged men are pigs, and he seems to live by this rule. Sometimes, he is a very unlikeable character, but he is still a compelling one. There is something in him that draws viewers in. I wanted him to have a happy ending even when I did not care for him.

The relationship between Porco and Fio is a fun one. Fio is young and idealistic, and she believes that Porco is capable of greatness. She believes that he has honor and is brave, things that Porco has forgotten about himself. As he spends time with the young and idealistic Fio, Porco seems to soften as a character.  Fio is also tough, working hard in a field with few women, and Porco begins to respect her, although reluctantly. They both try to protect each other from a variety of threats. Their relationship seems to be platonic, to me at least, and it’s a fun one to watch unfold. 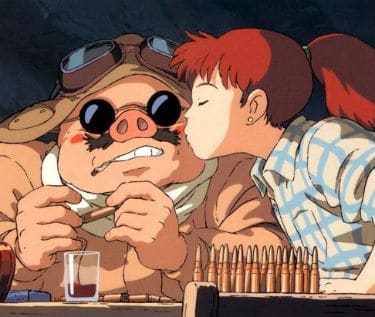 The animation in Porco Rosso is amazing. If you have seen a Studio Ghibli movie, you know that they are always gorgeous. This one is no exception; I especially love the flying scenes. It’s the typical Studio Ghibli film; it looks and sounds gorgeous. In Porco Rosso, there are times when the music gets a little silly, and I appreciate that.  It keeps the mood light. The voice acting is also fantastic, with Michael Keaton voicing Porco and Susan Egan voicing Gina.

Why did Porco turn into a pig? He thinks it’s because all middle-aged men are pigs, or that he is being punished for living while so many people died. I’ve heard a variety of things, ranging from he didn’t think he deserved to be human to he just hated humans because he saw what they did to each other in war. Either way, it’s described as a curse that needs to be broken, but it doesn’t take over the film. It’s just something that everyone seems to have accepted; this pilot is also a pig. Magic just seems to be part of this world, and I love that.

I don’t want to spoil the ending, but I personally love it. Part of the reason for that is that the ending of the film leaves a few things open to interpretation. This is something that I think makes it a stronger film. Viewers can form their own interpretations of the ending. If you’ve seen Porco Rosso, why do you think Porco turned into a pig? And how did you feel about the ending?

The love story in Porco Rosso is a bit different from other films. Porco/Marco and Gina 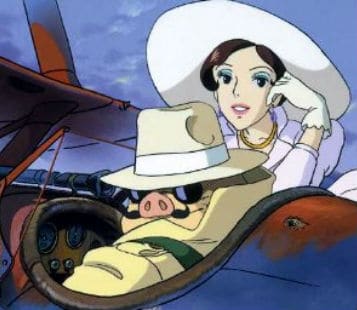 have been friends for years, and as the film goes on, the viewer sees how Gina feels about him. Small hints about Porco’s feelings for Gina are also sprinkled into the story. The romance is underplayed since the story is about Porco himself. This way, the romance doesn’t overshadow the rest of the story. Despite that, I found Porco/Marco and Gina to be a couple that I was rooting for. I knew how they both felt, and I appreciated the moments both characters realized the truth.

If you like movies that will make you laugh, movies with good friendships, slow and gradual relationships, seaplane fights, magic, and adventure, you should check out Porco Rosso. If you enjoy films about flying, 1930s Italy, or just like watching great animation, you’ll probably enjoy this movie. It’s a little harder to track down than some of the other Studio Ghibli movies, but if you can get your hands on a copy, Porco Rosso is definitely worth a watch (or twelve).

Content Note: There is some brief swearing. There are also a few fights, some running from the authorities, gambling, and brief moments of peril.

Our romance-themed entertainment site is on a mission to help you find the best period dramas, romance movies, TV shows, and books. Other topics include Jane Austen, Classic Hollywood, TV Couples, Fairy Tales, Romantic Living, Romanticism, and more. We’re damsels not in distress fighting for the all-new optimistic Romantic Revolution. Join us and subscribe. For more information, see our About, Old-Fashioned Romance 101, Modern Romanticism 101, and Romantic Living 101.
Pin this article to read later! And make sure to follow us on Pinterest.
By Bailey Cavender on May 15th, 2017