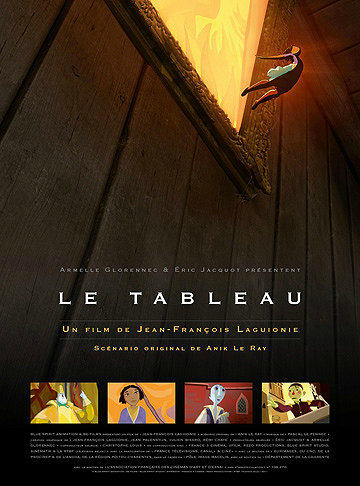 I went into this French animated film without knowing very much about it or its reception. This is a very rare thing for me to do with movies. I was intrigued by the premise and attracted to the unique art style. So I went into it not knowing what to expect.

The film takes place within a painting that is not complete. The people in the painting are separated into a strict caste system based on their completeness. There are the entirely painted characters known as the Alldunns who reside in a majestic palace, the Halfies who The Painter has left incomplete and live in the palace gardens, and the untouchable Sketchies, simple charcoal outlines who are banished to the cursed forest. The Alldunns decide they want to take over and this brings chaos to their world. The Halfie Lola, the Alldunn Ramo and the Sketchie Quill decide the only way to restore harmony is to find The Painter so that he may finish what he started. As the film evolves from a simple story to a much more meaningful parable, I could not help but be in awe of what I was watching. It is so profound and enjoyable to watch that my heart fills with adoration and wonder. The writers treat the viewers with respect, never being fearful to ask the tough questions: Why did The Painter make us? Why did he leave? What does he think of us? Are we actually equal in his eyes? The film embraces the mystery of what happened to The Painter and what makes a piece of art “finished.” It is a charming, philosophical parable about social status, racism, religious faith and existentialism. The film does not handle these themes with very much subtlety and because of that I can see some people getting annoyed or feeling like it is pretentious. However, for me personally, I enjoyed the more philosophical points of the story and appreciated the film, an animated film no less, talking about such things. I will certainly be checking out other films by Jean-Francois Laguionie and Blue Spirit Be-Films.

The characters are not very original but they are all still quite likeable. Ramo is in love with a Halfie named Claire and is determined to find The Painter so that he may finish her. If he can, then Claire and Ramo can finally be together without having to face the wrath of the other Alldunns. Ramo is a passionate character, not just in his wanting to be with Claire, but also with his desire to put an end to his fellow Alldunns’ ruthless treatment of the other painted characters. Quill is cynical and not very trustful. However, this attitude is understandable considering all he and his fellow Sketchies have gone through. I personally find him to be funny and sympathetic. He decides to go on the journey because he wants to ask The Painter a favor.

It is a charming, philosophical parable about social status, racism, religious faith and existentialism

Magenta is from a painting of a war taking place and longs to escape so it is no surprise that he jumps at the chance to go along on the journey to find The Painter. He is a pacifist and is thoughtful about why The Painter would paint such a gruesome thing like war. The Chandelier is the leader of the Alldunns and could be considered the one who exacerbates the prejudice within their painting. He is the one who encourages the Alldunns to want to become the superior ones and he seems to have many loyal followers. He does come off a bit generic but he is still functional as an antagonist. Finally, there is Lola the narrator and protagonist of the film. Lola is best friends with Claire and wants to find The Painter to help her friend and restore harmony to their home. She is by far the most thoughtful of the group with a compassionate nature. She wants answers and to learn so many things about the world outside her own. To me, she is an enjoyable character to follow, and her conversations with other characters are some of the most thought-provoking. The characters may not be some of the most complex, but they are still entertaining and their journey is a memorable one for all.

The animation of this film is possibly some of the most unique I have seen in a while. The art style seems to have been inspired by various things: the works of Pablo Picasso, Henri Matisse, Marc Chagall, Italian opera and Venetian history, with harlequin patterns and colors of yellow, red, salmon, orange, and blue. The kaleidoscope of colors is vibrant without being overbearing. There are even a few surreal dreamlike sequences that made me think of Salvador Dalí’s work. Most of all, at least to me, the art style really captures that of an expressionist with its distorted environments to evoke emotions, moods or ideas. Each painted world that is explored in the film is beautiful with a unique atmosphere catered to that world. At the same time they all feel like they were created by the same artist, which is a positive if one is trying to show all the work of a specific artist. The end result is a unique looking film that is truly a feast for the eyes.

The Painting is a thought-provoking, educational parable with lovely animation and philosophical themes. The characters are not very complex and the story’s themes are not very subtle. I would not recommend this film to everyone. I do recommend watching it in French with subtitles but there is an English dub option. If you do not mind slower paced films, have an appreciation for the visual arts and/or want something a little different then the mainstream animated films, then I recommend checking it out and seeing it for yourself.

Our romance-themed entertainment site is on a mission to help you find the best period dramas, romance movies, TV shows, and books. Other topics include Jane Austen, Classic Hollywood, TV Couples, Fairy Tales, Romantic Living, Romanticism, and more. We’re damsels not in distress fighting for the all-new optimistic Romantic Revolution. Join us and subscribe. For more information, see our About, Old-Fashioned Romance 101, Modern Romanticism 101, and Romantic Living 101.
Pin this article to read later! And make sure to follow us on Pinterest.
By Moriah Burbank on January 24th, 2015