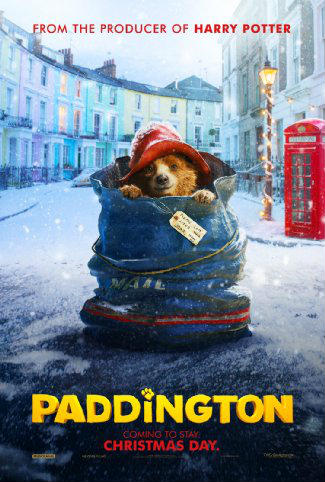 When it comes to film trailers, I rarely see a modern trailer that does what a trailer is supposed to do. It seems these days trailers either give too much of the film away so the audience does not see a point in seeing it or the trailer does not accurately represent what the film is about. Sometimes, this second tactic can be used as a marketing technique to make the audience think they are seeing one thing but in reality seeing something quite different. The trailer for Paddington is of the second variety of trailers. I remember watching the old cartoon The Adventures of Paddington Bear when I was a child and really enjoyed it. When I saw the trailers for this film I was horrified. But then when I began to hear good things about the film from other critics, I became more hopeful. When I finally saw the film for myself, I say to say to all you gentle readers, do not let the terrible trailers fool you as this film is truly enjoyable.

Paddington tells the story of a young bear who lives with his aunt and uncle in Darkest Peru. But when their home is destroyed due to a dreadful earthquake, Paddington is sent to London to find a new family and a new home. At Paddington Station, he meets the Brown family, who give him his name and take him in until they can find him a proper home. Paddington successfully brings its title character into the 21st century without losing its charm that makes the character so beloved. This film is very delightful and sweet. The humor is also great, witty and dry. There are many little asides and clever word play throughout the film. For instance, there is this chase scene with Paddington going after a pit-pocket and on the pit-pocket’s GPS it says bear left and when he looks out the window there is a bear on his left. The film has a good mix of jokes that kids will respond to and clever jokes that adults will respond to.

The film is filled with lovely and delicate imagery. The writer-director of the film, Paul King, takes inspiration from Wes Anderson, specifically when he depicts the Browns’ tall, narrow home as a dollhouse that opens up to reveal the family members going about their business in various rooms. There is also a pretty mural of a tree painted on the wall of the Browns’ curved staircase that changes to reflect the mood of the film and the family members. And of course the animation of Paddington is phenomenal. He is soft, tactile and beautifully detailed, with evocative facial expressions which help create an emotional connection. The film also has plenty of heart without being overdramatic. Many of the British press who saw this film and reviewed it say the film does an excellent job of telling Paddington’s origin story as well as capturing the tone of the books and old cartoons.

The messages and themes in Paddington are so well done, sophisticated and impressive for this kind of family film that they elevate the film from what is already a film of good quality. Paddington honors London’s past and future. The film alludes to the orphans of WWII, which is something that I know about from watching BBC television, but I didn’t think about it that often. So to highlight it in this film, beautifully illustrating how so many people took in orphans into their homes from train stations, was really touching. Even a bear from Darkest Peru who loves marmalade can find a proper home in London and be welcomed with open arms. In my mind, these messages elevate Paddington from being a good family film to being a great film in general.

The film has affection for its characters and with each character the audience feels sympathy for. All of the characters are wonderfully realized. The Browns are delightful. Mrs. Brown is a children’s book illustrator who is empathetic, sweet, nurturing and warm but creatively frustrated. Judy the daughter is very intelligent and learns multiple languages but she is also embarrassed by everything her parents do, including bringing home a bear. Jonathan the son wants adventure but is constantly reined in by his father Mr. Brown, an insurance analyst. Both parents must learn to not be so over protective of their kids as they continue to get older, otherwise they cannot grow up to be independent and resilient. Paddington himself is wonderfully in character and exactly the bear I remember from watching the cartoon The Adventures of Paddington Bear. He is genuine, curious, exceedingly polite, klutzy and his love for marmalade is just as adorable now as it was then. He always tries to do things right and he looks at everything as if it is something brand new. He is just so delightful. The villain of the film, played by Nicole Kidman, is fantastic. She is not made to by sympathetic and her motivations are not based on any desire to please someone else. Through and through, she is just an evil woman and also gave me Cruella de Vil vibes in terms of just pure enjoyment of watching a villain be a villain.

Paddington is an enjoyable, charming and uplifting film that both kids and parents can enjoy with sophisticated themes that elevate it to a kind of film that anyone can enjoy. As many people have already said, you will leave the theater with a smile on your face. And I did as well.

Our romance-themed entertainment site is on a mission to help you find the best period dramas, romance movies, TV shows, and books. Other topics include Jane Austen, Classic Hollywood, TV Couples, Fairy Tales, Romantic Living, Romanticism, and more. We’re damsels not in distress fighting for the all-new optimistic Romantic Revolution. Join us and subscribe. For more information, see our About, Old-Fashioned Romance 101, Modern Romanticism 101, and Romantic Living 101.
Pin this article to read later! And make sure to follow us on Pinterest.
By Moriah Burbank on March 21st, 2015