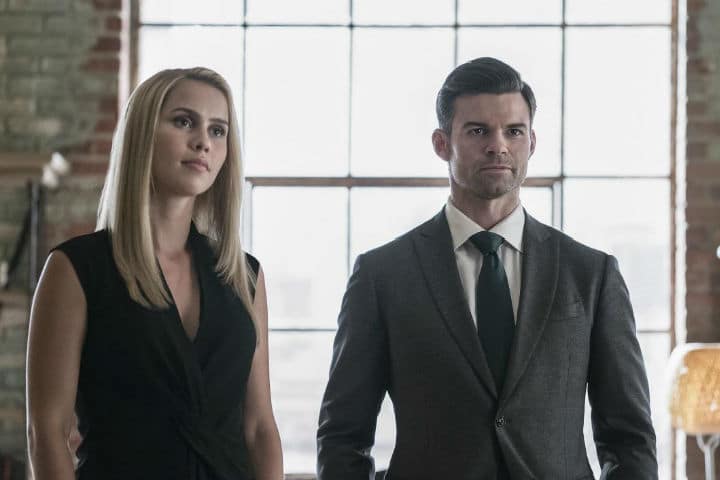 NO QUARTER RECAP AND REVIEW

The Originals I know and love is back this week with “No Quarter.” Somehow, the show always improves with the wit of Elijah and Kol, the strength of Rebekah, and the heart of Camille.

RELATED The Originals: Gather Up the Killers Recap and Review – Marcel’s Reign

After going on a killing spree (they were insatiably hungry after all), the Mikaelsons and Hayley turn their attention to a Klaus rescue mission. They then use Josh as a sort of ally/hostage and work their way through the tunnels to the Compound. 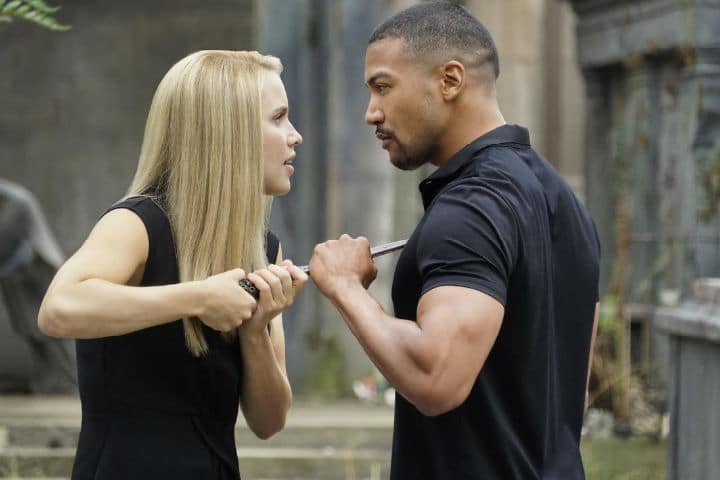 Meanwhile, Rebekah plays the pretty distraction when she meets up with Marcel to plead for her brother. But he’s not hearing any of it. The two exchange regrets for loving each other and Rebekah ends up with wooden arrows in her back. Thankfully, with Kol’s help, she escapes.

She listens to Klaus and guides him to a revelation about his own fears as a monster: that he will be a monstrous father and Hope will become like him. But Cami tells him that he needs to fight, to not just be a myth, and go be an amazing father to his daughter! Just in time, he’s able to pull out the Tunde blade where Freya, Hayley, and Elijah wait for him.

In the end, the Mikaelsons escape with Klaus from the Compound. But they don’t make it far with Marcel on their heels.

Surprisingly, when the Mikaelsons come face to face with Marcel, the scene doesn’t turn into a showdown. Instead, with a humble plea, Klaus offers a chance at peace. He asks Marcel to let them leave so they can stop the endless cycle of violence (Aww, Cami really can still inspire Klaus).

Marcel refuses to see his own villainy/the monster within and with his newfound ginormous ego lets them go with the declaration:

“I AM SHOWING YOU MERCY!”

They let him have the final word since Marcel is able to kill all of them after all. They swallow their pride and leave.

Klaus finally sees his daughter in the end and it’s a beautiful moment! I am looking forward to seeing how Klaus evolves as a father this season and if he can become the better man he wants to be.

In a separate story thread, Vincent works with Maxine to help her find her son Adam. There have been stories of disappearances and rumors of hauntings which Adam may be connected to. After Vincent has a strange encounter in a “haunted” building while in search of Adam, the symbol of the ouroboros appears on the wall. And it’s something Vincent’s encountered before. And it’s not good. Uh-oh. 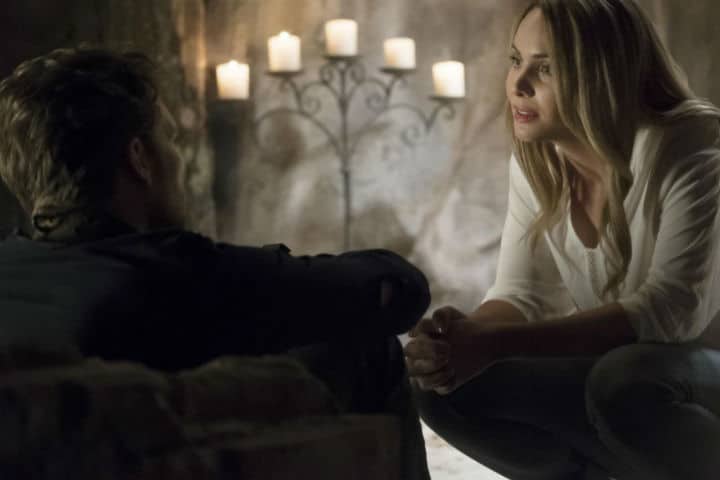 Even though Cami wasn’t technically there (or was she?), I just loved hearing Klaus tell Cami “I miss you.” Klaus is a true Heathcliff-like Byronic Hero who feels the need to talk to his deceased love. Not to mention, Joseph Morgan and Leah Pipes pick up their chemistry and the love between the characters as if it was never gone. Their beauty and the beast love story is sorely missed on the show and I still reiterate that it was a mistake to write Leah Pipes off The Originals.

“I had moments of solace to sustain me.” – Klaus (in reference to Cami)

“Good lord that one had lungs on him. Should have been an opera singer.” – Rebekah

Elijah wonders why Josh is still around. Well, if I’m being honest, I’m really beginning to wonder the same thing. Josh is fine as a character (and it’s nice to see him move on and be happy) but he feels more like unnecessary scene decoration at this point. And while I have never felt his complete purpose as a regular character (he was the most interesting with Aiden around), at least he had a purpose by being friends with Davina and Cami. But with their deaths, I honestly just don’t get why he’s around as much as he is considering his connections to Marcel and the Mikaelsons are weak at best.

Honestly, I just don’t believe that Josh would somehow be Marcel’s top guy. Josh just doesn’t scream henchman. So, how is it that he’s outlasted characters like Cami and Davina? And why does he get more screen time than Kol, an actual original? When the writers have removed almost all of the female characters that have been a part of this show, one wonders why they all got the cut and Josh still hasn’t. And perhaps this rant is mainly because he’s now the main bartender at Rousseau’s. If there’s one thing I can’t stand, it’s seeing fabulous female characters being replaced with a male character (and one of much lesser importance to the overall story). SIGH. 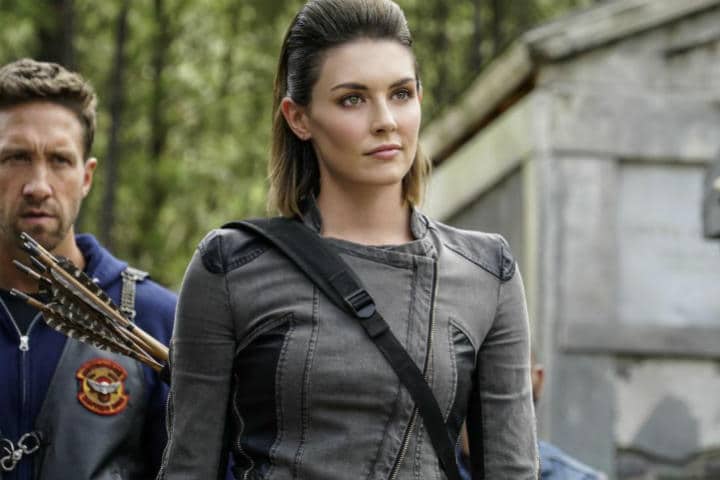 On another unnecessary character note, the new female character/henchman for Marcel (whose name I still don’t know) still doesn’t work for me. I definitely WANT more female characters but I find her to just be there to serve Marcel which I’m not into.

If you’re not familiar with Reader’s Intent – look it up! I love interpreting information based on the textual evidence presented to me and there’s nothing that disproves she couldn’t, in fact, actually be a ghost.

My interpretation? I like to believe it really was Cami there as a ghost pretending to be a hallucination so she could give Klaus “solace” in his darkest times. Think about it. If Klaus knew she was actually there, in the future he might obsess and try to contact her ghost.

But Cami being classic Cami would want Klaus to focus on Hope and living in the now and not be distracted by her. All of the light she inspired in Klaus was to be there for his daughter. So, that’s my impossible theory and I’m running with it! (Which means Cami could return again in ghost form in a future season. Look at the finale of The Vampire Diaries! I like to imagine she’s there with Klaus (like Enzo was for Bonnie) even when he can’t see her. Cami’s there as the angel on his shoulder. She always was an angel to Klaus from the start!)

Vincent, Harry Potter, and the Ouroboros?

And then there’s the ouroboros and dark magic that had an almost Harry Potter/Voldemort like vibe. And I am all for some Harry Potter influence. Did anyone else catch the magical protection spell of a mother’s love that saved Vincent? I also think The Originals could use a Voldemort type of villain because I’m over the Marcel vs. Klaus story.

Then to add to the intrigue, Vincent blames himself for what’s happening. Could this connect back to his ex-wife? Or does Vincent have a darker history than anyone knows? Or perhaps he accidentally unleashed a darkness with foolish experimentation as a young witch? With Hope being a young witch and Alaric (and likely his magic school) making an appearance, this connection doesn’t seem like much of a stretch. But only time will tell…

Well, what did you think of “No Quarter?” Have any of your own theories? Let me know in the comments!

Our romance-themed entertainment site is on a mission to help you find the best period dramas, romance movies, TV shows, and books. Other topics include Jane Austen, Classic Hollywood, TV Couples, Fairy Tales, Romantic Living, Romanticism, and more. We’re damsels not in distress fighting for the all-new optimistic Romantic Revolution. Join us and subscribe. For more information, see our About, Old-Fashioned Romance 101, Modern Romanticism 101, and Romantic Living 101.
Pin this article to read later! And make sure to follow us on Pinterest.
By Amber Topping on March 25th, 2017

1 thought on “The Originals: No Quarter Recap and Review – Operation Rescue Klaus”