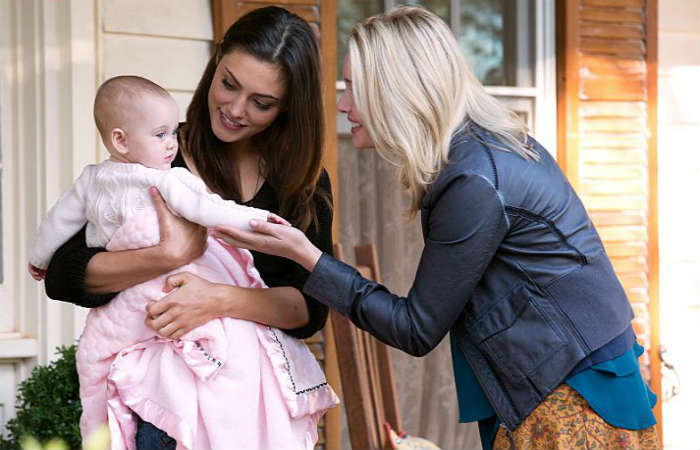 GONNA SET YOUR FLAG ON FIRE

The Winter Premiere “Gonna Set Your Flag on Fire” of The Originals returned as strong as ever with surprise twists, action, romance and of course the brand new Rebekah played by talented newcomer Maisie Richardson-Sellers. 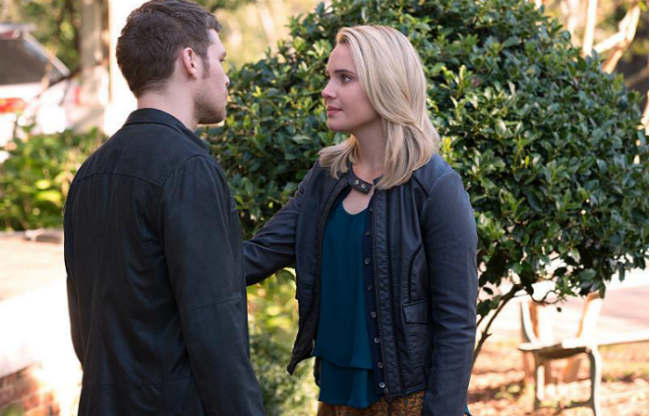 The episode begins in typical fairy tale fashion as Klaus, our narrator, continues to tell more of the originals’ story to Camille. This time with a happy surprise at the end: Cami finally learns that Hope is alive and well. With Finn out for vengeance, Klaus brings Cami to the safe house with Elijah and the baby to protect her. 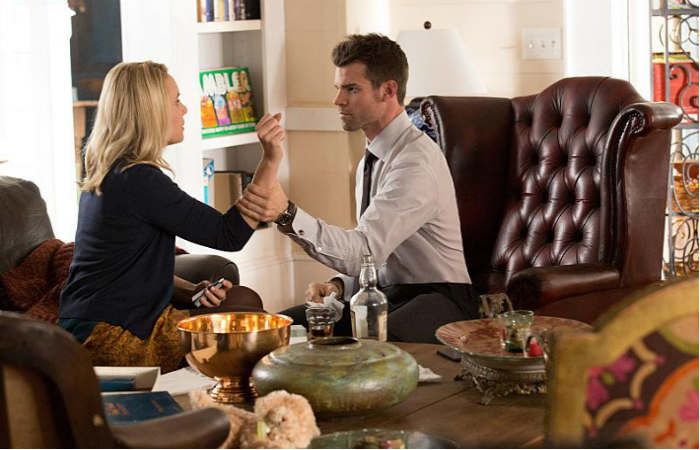 So while Klaus and Hayley return to the compound, Elijah and Cami stay behind to have some much needed bonding time. First, they raid the liquor cabinet. Then, the two play board games. But with Elijah suffering from a form of vampiric PTSD, things don’t exactly run smoothly. But by episode’s end, the two seem to develop a deeper respect for the other. It will be interesting to see how this friendship plays out in future episodes considering they’re both still stuck at the safe house for the time being.

THE SPELL OF ENTRAPMENT 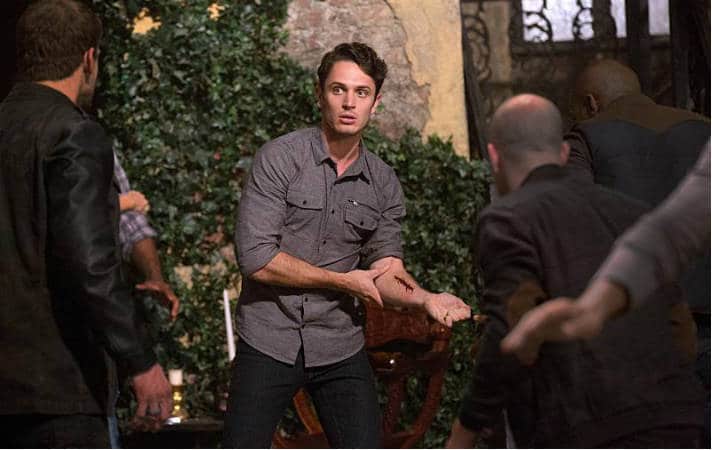 Back at the compound, Hayley, Klaus and Marcel assemble a meeting between vampires and werewolves to see if they can come to a peaceful arrangement. With tensions running high, Finn finds the perfect moment and casts an entrapment spell that holds the vampires and werewolves prisoner inside the compound. Proving he has a flair for the dramatic (definitely a Mikaelson), Finn raises the stakes by making all the vampires hungry for blood in the hopes of creating a bloodbath. And I mean, crazy hungry–worse even than when they first turned. This little game puts a little damper on the budding star-crossed romance between Josh and Aiden, especially when Aiden cuts his arm.

So with the vampires out for blood and time running out, Kol brings in Davina to help fight against Finn’s spell. But the spell is too strong. By the end, they’re able to only get all the werewolves out with the vampires still stuck inside.

Meanwhile, Finn finds his mother only to be shocked at her transformation into a vampire. He accuses her of being a hypocrite and attacks her. He then places her inside a magical circle next to Mikael– the purpose to be revealed in a later episode I’m sure.

And as for poor Kol, when Klaus learns of his treachery with the missing Rebekah, he locks Kol inside with all the bloodthirsty vampires. It looks like next week Kol may be in for quite a bit of trouble.

A HAUNTED HOUSE WITH A FAIRY TALE TWIST 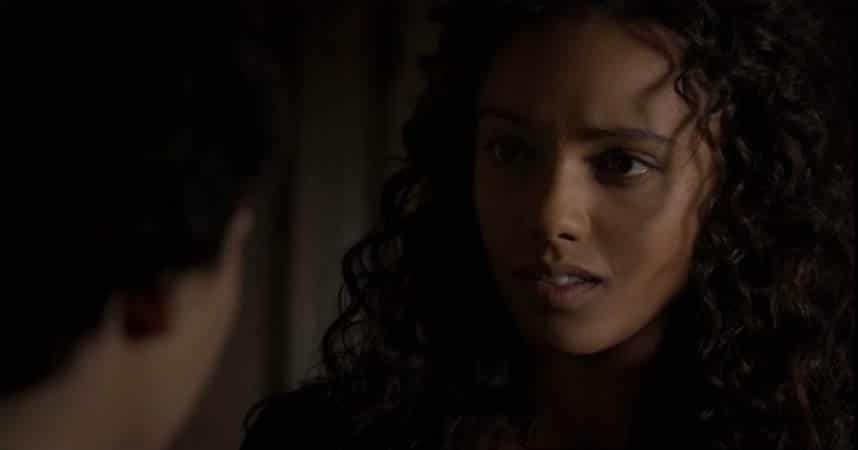 And then there’s Rebekah! Maisie Richardson-Sellers steps into the role of Rebekah Mikaelson with charisma and above all believability. When the Doctor in Doctor Who takes on a new face, likewise here, I can easily believe that this is the same Rebekah we’ve come to love the last few years. And thankfully this little side story is both intriguing and entertaining – it even reminds me of the British series Being Human, which is always a good thing.

Rebekah wakes to find herself in a magical insane asylum of sorts where witches broken by magic are imprisoned. Unfortunately, a fanatical group called ‘The Kindred’ has the run of the house. So with the help of the harvest girl Cassie and a seemingly friendly ghost, Rebekah tries to find her way out. But so far she has no such luck. But she does make a strange discovery. There’s a blond girl in the attic asleep (or dead) inside a glass coffin. 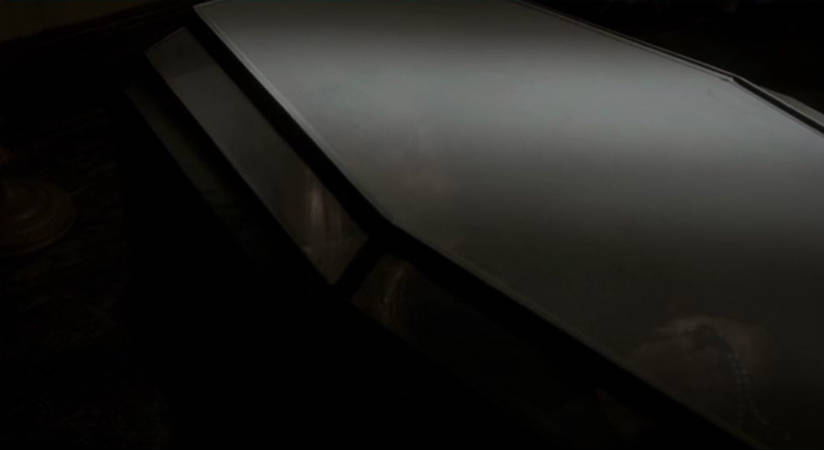 At the end of the episode, the writers give us a HUGE reveal:

Lying asleep in the glass coffin is Freya, the long lost Mikaelson sister.

This new haunted house with a magical hierarchy along with the dark fairy tale introduction for the sister may prove to be one of the best developments of the season. 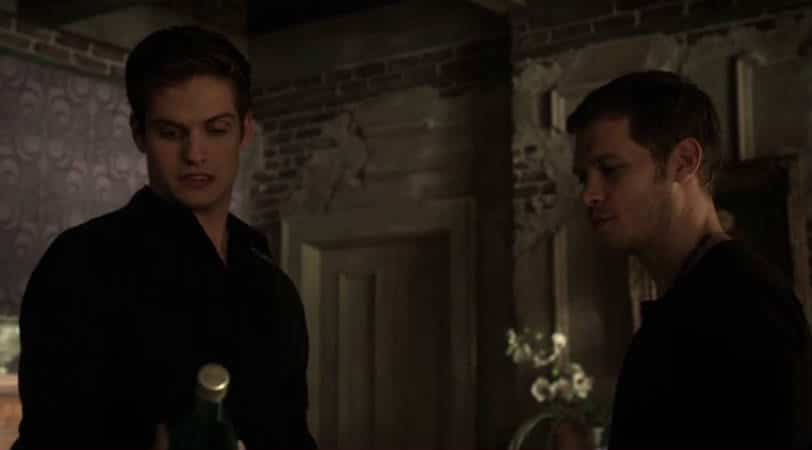 Kol: Ding-dong the witch is dead… or undead, whichever. 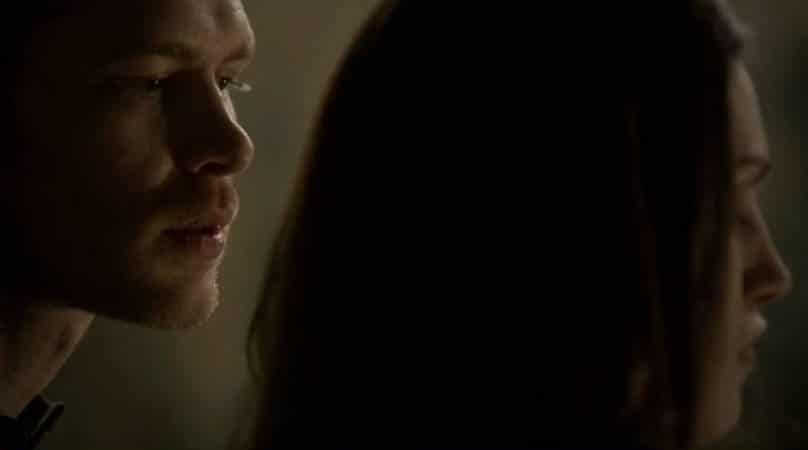 Klaus (to Hayley): You’re feeling guilty, aren’t you? Wondering if you should tell your betrothed things he doesn’t need to know. For all the poems written on the subject of unrequited love, there are so few on the pain of being the object of that affection. The truth is, Hayley, it’s not love on which the strongest foundations are built. It’s the decency of merciful lies. 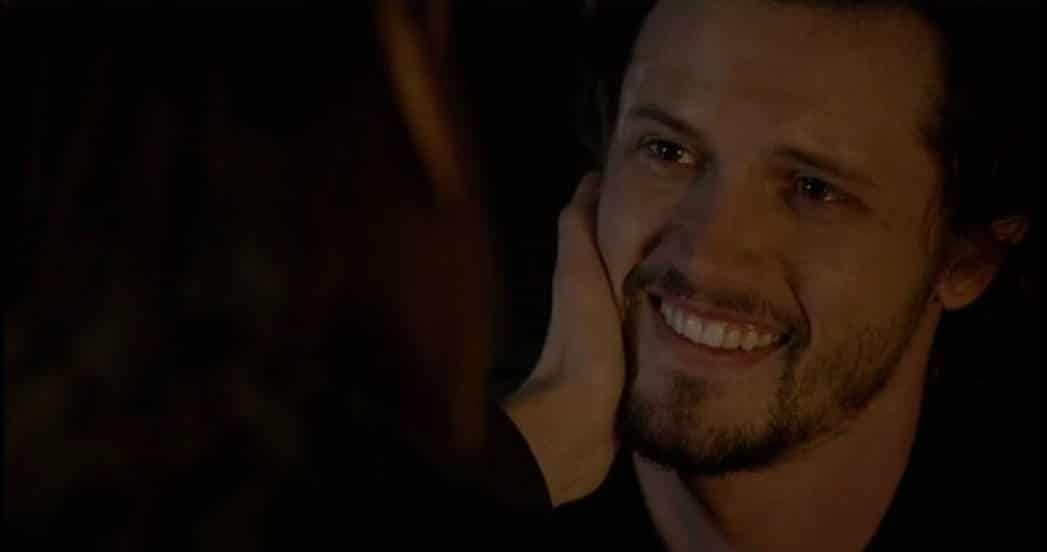 And it’s this unrequited love that brings me to this week’s standout romantic moment. Sometimes love is one sided. And just because Jackson loves Hayley without her love in return, doesn’t in fact diminish his feelings and the romance behind his idealized love for her.

Earlier in the episode, there was a little bit of Hayley and Elijah tension. With the two finally together, her upcoming “I Do’s” has put a little strain on their relationship. Will she go along with the wedding to save her people? Or will she throw all caution to the wind to be with the man she loves? Early on, it becomes quite clear which direction she’s planning to take. It may be painful, but she chooses duty over love. And in a brave move, she decides to tell Jackson the truth about her and Elijah. At first, he’s upset. But then by the end of the episode, he comes around giving an impassioned speech about his feelings.

While Hayley complains about too many rings, Jackson in a bold moment, speaks up:

“Maybe just one more,” he says as he pulls out the ring to a surprised Hayley. “I had no right to act the way I did earlier…You were just being honest with me. And that is something I should have done with you from the very beginning. I love you, Hayley. I think I always have.”

Hayley tries to interrupt, but instead he continues.

“I know we’re only doing this to fix all the stuff that we broke when we sold our souls for those damn rings. Okay? But, I loved you before I knew you. And every moment that I spend with you, every single thing that I learn about you just makes me love you even more. But I promise that we will turn this around for our pack. We’ll save our friends from whatever hell we’ve dragged them into, and that is the only thing I can ask from you. Because I’ve made a lot of mistakes in my life, Hayley Marshall, and forcing you to love me isn’t gonna be one of them. But, I want to marry you.”

At this point, it’s obvious he’s winning Hayley over as she begins to smile. He finishes:

“And knowing everything that I know, I hope to hell that you’ll marry me.”

Hayley reaches over to gently touch his face with her hand as she quickly agrees to his proposal. Jackson smiles and laughs in return as he puts the engagement ring on her finger.

Do you think Hayley and Jackson will go through with the wedding? Or will something happen to break up their seemingly inevitable nuptials? Jackson is such a sweetheart and a part of me doesn’t want to see his heart get broken, but that seems also pretty inevitable. Plus, it wouldn’t be The Originals without a bit of drama, right? I can’t imagine this wedding happening without some kind of a fight. And I do actually really love the Hayley and Elijah dynamic, so I’m personally a bit torn…

And who do you think they should cast as Freya? I’ll have to think about this one myself. But here’s to hoping they cast someone fantastic!

Well, what did you think of the Winter Premiere “Gonna Set Your Flag on Fire?” How do you feel about the new Rebekah? Are you on board with the Hayley/Jackson wedding? Let me know in the comments!

Stay tuned for when I recap the next episode “Brotherhood of the Damned.”

Our romance-themed entertainment site is on a mission to help you find the best period dramas, romance movies, TV shows, and books. Other topics include Jane Austen, Classic Hollywood, TV Couples, Fairy Tales, Romantic Living, Romanticism, and more. We’re damsels not in distress fighting for the all-new optimistic Romantic Revolution. Join us and subscribe. For more information, see our About, Old-Fashioned Romance 101, Modern Romanticism 101, and Romantic Living 101.
Pin this article to read later! And make sure to follow us on Pinterest.
By Amber Topping on January 20th, 2015