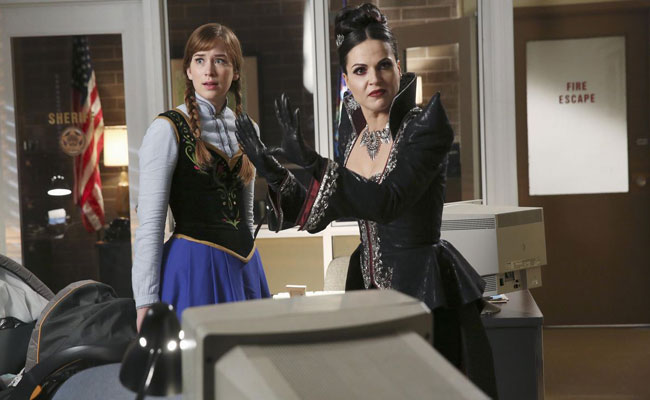 Once Upon A Time Recap: “Shattered Sight”

As we come to the end of our Frozen story arc, this week’s episode of Once Upon a Time veered from campy fun to genuine earnestness and back again so many times I got dizzy. This episode has something for everyone. If you’re like Snow and appreciate a good happy fairy tale ending, then you’ll love the denouement, in which it turns out love does conquer all. If you’re more of an evil villain fan and have been yearning to see an OUAT villain who isn’t wicked because of a traumatic past but just because being an evil villain in a fairy tale is fun, then Regina definitely has a treat in store for you.

The Spell of Shattered Sight 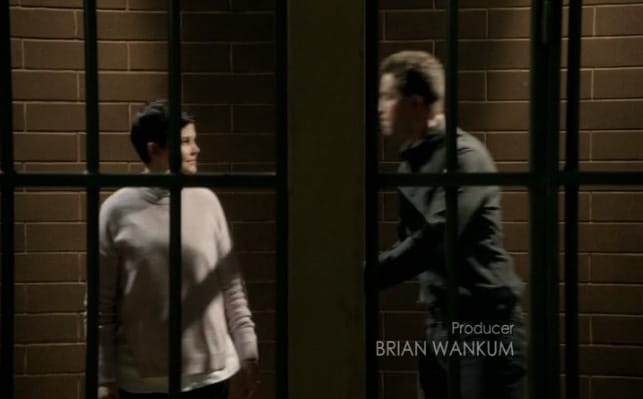 As our story begins, we zoom in and get a front row seat to the Charmings bickering, well…charmingly. The pair are sniping at each other from their adjoining cells. Snow calls David a shepherd and a fraud. He sneers back that, for all he knows, Baby Neal could be Dr. Whale’s! The whole thing is exceptionally amusing to say the least.

In another part of town, the curse-immune Elsa and Emma want to go after Ingrid, but must first figure out how to get rid of their “friendship” ribbons. Apparently not only does the ribbons bond the three women together, it keeps them from harking each other. The only way to remove said ribbons is to muster up so much hate that it overpowers the Snow Queen’s love for her “sisters.” Now who do we know who could take care of this little job? Regina Mills, a.k.a. the Evil Queen.

The Evil Queen is Back 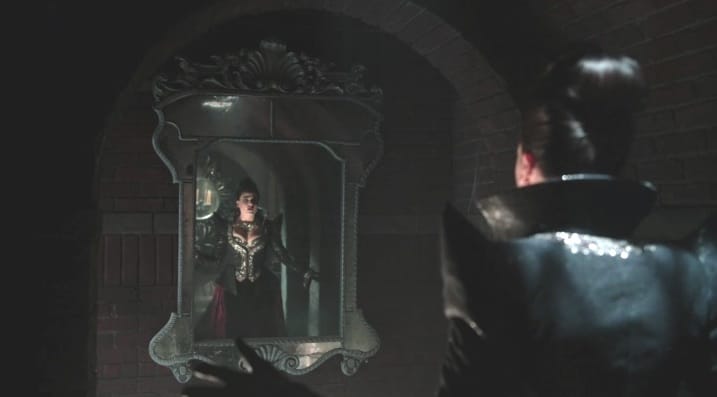 After the spell hits, our sweet Regina turns back into her pre-backstory season one evil self. Yep, she’s back guys. Hooray!! I honestly didn’t realize just how much I loved her until she came back for this episode. This change comes complete with a brand new cleavage-bearing goth dress and Regina’s signature satisfied smirk we all know and love. One has to wonder whether Lana Parilla missed this incarnation of her character as much as I did. 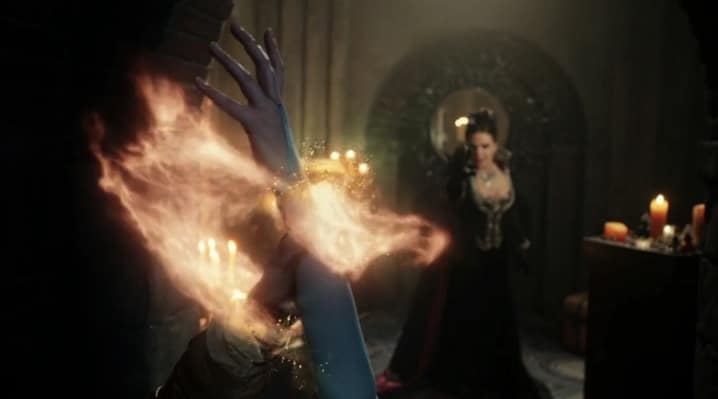 Back to destroying those ribbons. Emma the Savior figures out how to trick Regina into helping them with a few clever lies designed to rev Regina’s engine. Emma first tells her that she brought Marian to Storybrooke specifically to ruin Regina’s happy ending. She then adds that she’s been parading around with Hook just to torture Regina, and flaunt what she’ll never have. Regina can’t tell she’s being played and hurls a fireball at Emma. Elsa and Emma hold up their ribbon-bound wrists and the ribbons absorb the flame and disappear. The two then skedaddle off as fast as they can away from an enraged Regina. 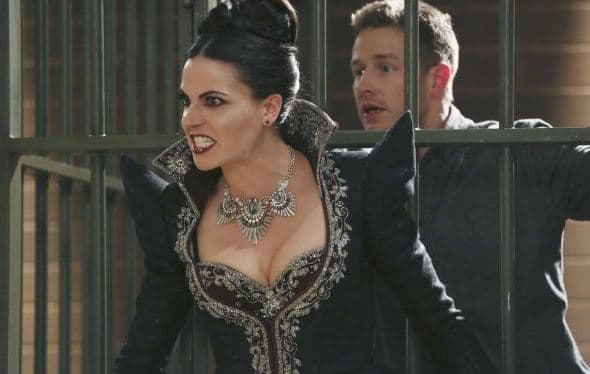 Somehow Regina doesn’t realize Emma and Elsa have headed to the Snow Queen’s Fortress of Solitude and she decides to head to the sheriff’s station instead. There she finds Snow and David bickering on. Her first task while there is to whisk away Anna and Kristoff to the beach where they first landed in Storybrooke in order to get Snow and David all to herself. Wanting to settle things with Snow once and for all, Regina frees her and conjures up swords for both of them, claiming, “I want to watch you bleed.” Now, hold on a minute. Is this the same show? I feel more like I’m watching Game of Thrones than Once Upon a Time. But wait, we then see Henry setting a booby trap for Hook reminiscent of Home Alone and we’re safely back on ABC.

Back at Ingrid’s lair, the Snow Queen is shocked to learn that her “sisters” have removed their ribbons. Never fear, though. She has more presents for them, namely her “friendship rocks,” a.k.a. the rocks she stored their forgotten memories in. Emma’s contain her memories from when she lived with Ingrid as a foster kid. 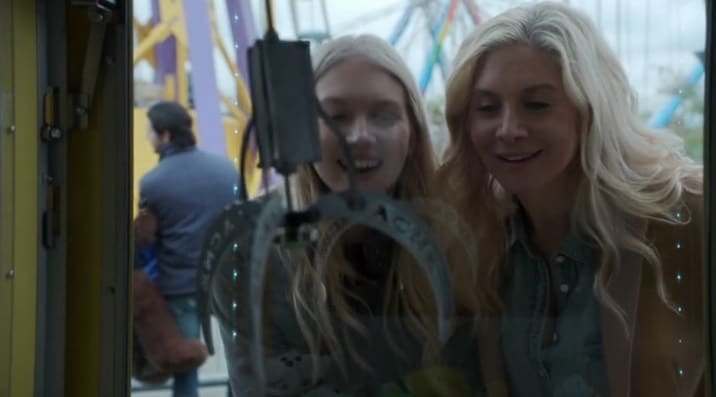 The memories prove that they did in fact have a true bond, one that included prank-pulling, carnival outings, and pushing each other in front of cars… Actually, Emma ran away after that one. Apparently Ingrid believed that Emma was starting to develop magical powers. So, to sort of jump-start her magical engine, Ingrid pushed her in front of an oncoming car and demanded that she stop it using magic. Not surprisingly, Emma decided her foster mother was nuts after that and took off that night. Two years later. Ingrid traveled to Storybrooke, Maine, the scroll from the sorcerer’s apprentice allowing her to pass through the barrier, and set up shop.

Despite the lure of the stones, however, Emma is determined to take the Snow Queen down. Elsa is not so courageous, Ingrid being her aunt and all. So, Emma lifts her arms and prepares to blast Ingrid with her magic, saving the town once again, when Anna shows up. 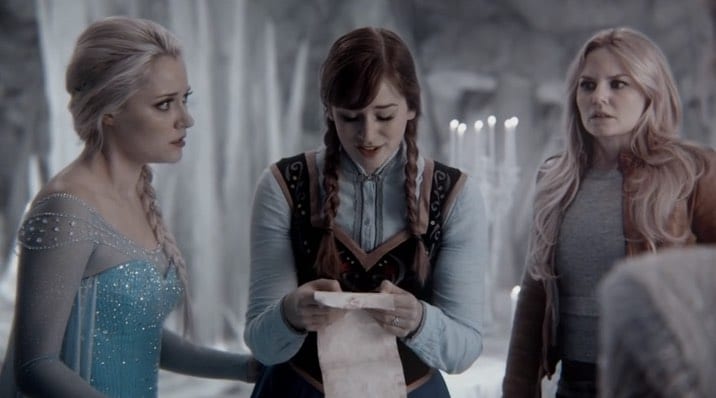 Anna has just come from the beach, and she has the message in a bottle from her mother that she just happened to run across, Queen Gerda. It ends up containing a formal apology for trying to take away Elsa’s powers. Gerda laments that she wasn’t able to accept both Elsa and Ingrid for who they are, as well as for trapping Ingrid in the urn. In the letter she sorrowfully states, “I’d give anything to take back what I did, to hold her hands one more time.” The bottle also happens to contain the rock filled with the memories of Ingrid that Gerda had the troll remove from Arendelle. 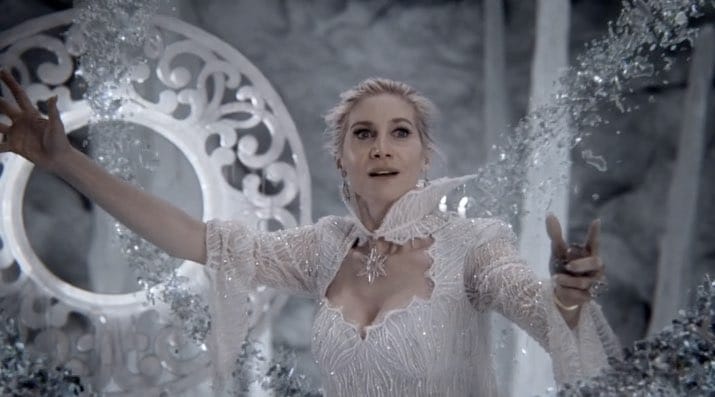 After initially trying to strangle Anna after hearing this news, Ingrid stops and realizes her sister did in fact love her and that Storybrooke doesn’t deserve the curse. Sacrificing her own life, Ingrid absorbs the spell back into her body. Emma acknowledges the power of love in what Ingrid did: “She sacrificed herself for us. For all of us.” Was there no one there to point out that she was just cleaning up her own damn mess?

And now it’s time for hugs all around. Everyone settled their disputes and the town is once again peaceful. Except for one loose end…Rumpel still plans on using the sorcerer’s hat to cleave himself from the dagger once and for all, leave Storybrooke with Belle and Henry, and kill Hook. I guess there’s no rest for the wicked.

How did Ingrid remove Emma’s memories in 2011 before the first curse was broken and magic returned to Storybrooke?  We know she didn’t retain her powers when she came to Earth because she couldn’t freeze that charlatan psychic in Boston.

There were so many to choose from… 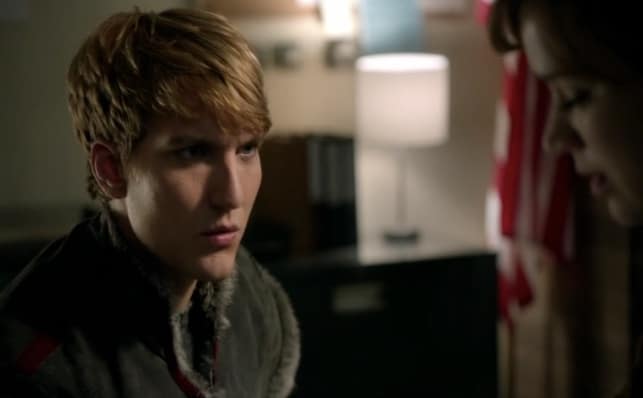 “I’m seeing clearly now too. I’m beginning to think that this haircut wasn’t my only bad idea.” – Kristoff 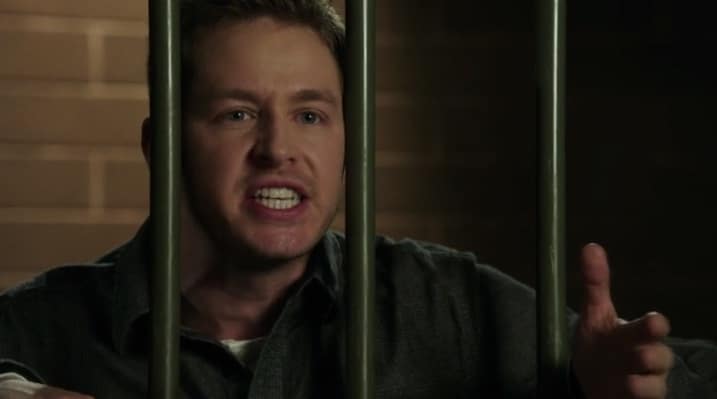 “And you’re from Arendelle. What are you doing selling ice? The whole place is frozen!” – David to Kristoff (seriously, why?) 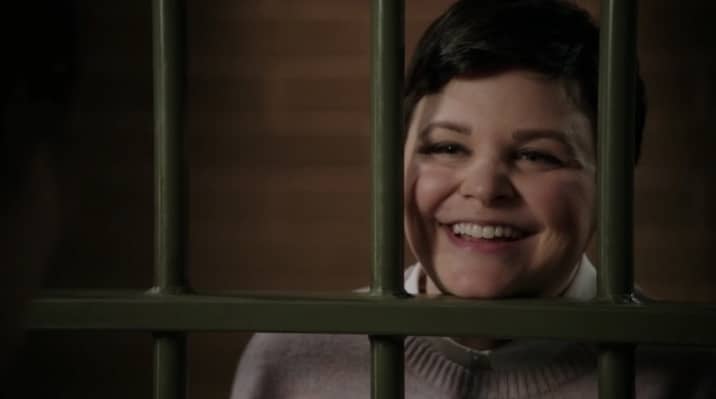 And Snow wins the prize for best lines!

“Whale is a doctor. He actually knows which part is which!” – Snow to David

“At least I know how to swaddle our child correctly!”

“I swaddle him perfectly!”

“He’s a baby not a breakfast burrito!” – Snow and David

“Someone slip me a poison apple and put me out of my misery.” – Snow

“You know what Swiss Miss? You do know me. I pick flowers. I talk to birds. I do all kinds of warm, fuzzy things. You know what else? I kill. Yeah, that’s right. Snow White’s a murderer.” – Snow to Anna

Coming Up…Another Once Upon A Time Recap…

The Queens of Darkness, Cruella DeVille, Ursula, and Maleficent, will be joining the show this spring. It’s like the League of Baddies!! I can’t wait!

What did you think of this week’s episode of Once Upon a Time? Are you as excited as I am for the Queens of Darkness? Will the gang be able to Rumpel from enacting his dastardly plan? Sound off below…

Check out our other TV RECAPS including earlier Once Upon A Time Recaps.

Our romance-themed entertainment site is on a mission to help you find the best period dramas, romance movies, TV shows, and books. Other topics include Jane Austen, Classic Hollywood, TV Couples, Fairy Tales, Romantic Living, Romanticism, and more. We’re damsels not in distress fighting for the all-new optimistic Romantic Revolution. Join us and subscribe. For more information, see our About, Old-Fashioned Romance 101, Modern Romanticism 101, and Romantic Living 101.
Pin this article to read later! And make sure to follow us on Pinterest.
By Rebecca Lane on December 8th, 2014