Once Upon a Time Recap: Mother

The mothers of Once Upon a Time took center stage this week. Could this have anything to do with the similarly named holiday, Mother’s Day, coming up? Hmm…if it looks like a duck and quacks like a duck, then…it must be a duck! One of my favorite evil ladies, Cora, makes an appearance. Cora and Regina’s relationship serves as our first mother/daughter story of the night. Next, comes the fiery duo Maleficent and Lily, exploring the murky waters of their new-found connection. To top off this mother/daughter fest, Emma finally hashes things out with her folks, Snow White in particular. So, get out your box of Kleenex because you’re going to need it with all the family drama being thrown around in this episode. 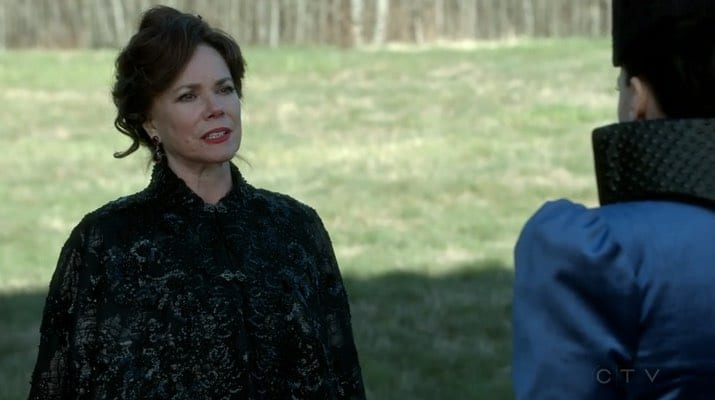 The mommy-fest begins with Cora paying a surprise visit to Regina after her return from Wonderland. With her usual impeccable timing, Cora steps onto the scene just as Regina is mourning the anniversary of Daniel’s death at his grave. Why is she there? Like any good mother, she wants to see her daughter happy, so she’s come to make peace and seek out a man that can make Regina happy. A little bird…or rather fairy (Tinker Bell)…told her of Regina’s lion-tattooed “soul mate,” and now Cora is determined to hunt him down. 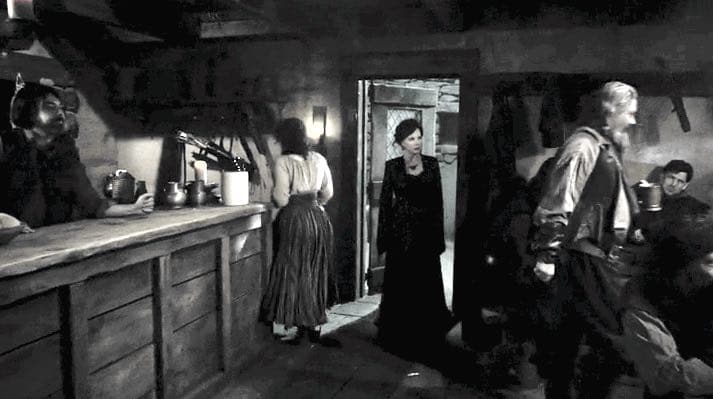 She’s even willing to go slumming at a tavern in Nottingham to find her baby’s true love. And who’s the first person she runs into? Why, the Sheriff of Nottingham, of course. And he’s more than happy to give Cora the 411 on Robin Hood (the “married, moralizing sap”). Not exactly thrilled with his glowing description of Robin, Cora decides to have the Sheriff (a “real” man) masquerade as Regina’s soul mate instead, fake lion tattoo and all. 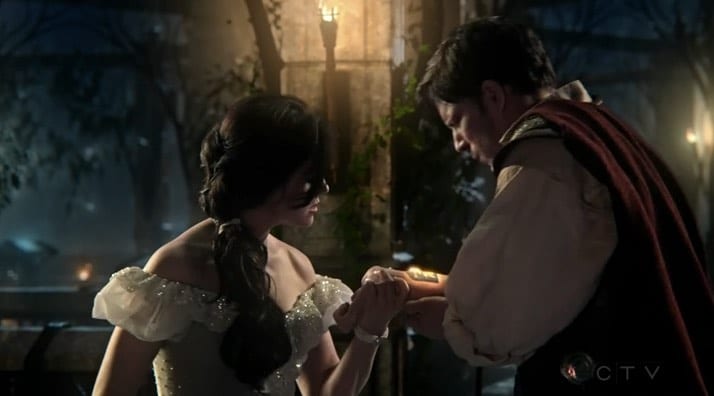 What begins as a romantic evening with the two strolling around the castle grounds under the soft glow of moonlight, quickly turns sour when Regina discovers that the all-important tattoo is a fake. Convinced that Cora was simply plotting the ultimate long con (a plan involving Cora wanting Regina to have children so that when Cora killed her off, she would be queen at last), Regina does the only thing she can think of that will truly hurt her manipulative mother. With all the skill of a pro beer chugger, Regina slams down a potion that renders her sterile (so that’s why she had to adopt).

In the end, though, it looks like Regina only hurt herself. Cora wasn’t trying to mastermind some giant plot for power. She truly just wanted to see Regina find happiness. With a final sorrowful look at her daughter, Cora sighs, “The only one standing in the way of your happiness, Regina, is you.”

The mother/daughter drama continues as Regina, Emma, Zelena, Robin, and Lily return from their road trip. As everyone pours out of Emma’s small bug, two things immediately become evident: Emma still hasn’t forgiven her parents and Maleficent turns into a giant cuddly toy dragon at the sight of her daughter. 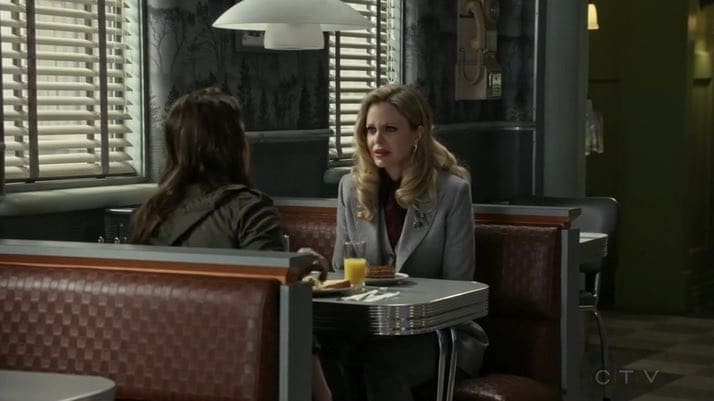 Unfortunately, Lily doesn’t feel the same way. She’s been expecting a badass fire breathing dragon, someone who will join her in getting revenge on the Charmings for what they did to her. Maleficent appears to have had a change of heart, however, saying, “We can be happy in the future, or we can be angry about the past,” in reference to seeking revenge. An angry and disappointed Lily fires back with a nasty blow about how Maleficent could have let them take her. “Now I get it. You’re a pushover. What’d they do? Rub your belly? Give you a dragon treat?” After this nasty jab, Lily serves one last ball before walking out on her new mother. “I’m grown up now. I don’t need grooming advice from Annie Hall.” Ouch, that one had to hurt. 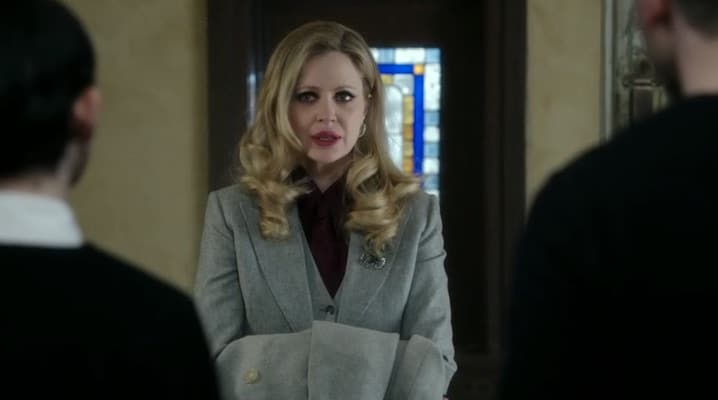 In a truly unexpected twist of fate, Maleficent decides to seek help from the very people Lily, and previously she, wants to get revenge on: the Charmings. No strangers to trying to bond with a rebellious newly found child, the Charmings understand at once that Lily is simply reacting the same way Emma did when she first met them. Her walls are up, and Maleficent has to try and get her to lower them and put a little faith in her love. In a touching turn of events, the three join forces to find Lily, and get her to accept Maleficent.

On the other side of town, Regina wastes no time in escorting Zelena to her new home: a nice padded cell below the hospital, magic-blocking handcuffs included. She then takes a little trip to check up on the Author and Rumple. This visit turns up some very interesting information. Apparently, Rumple won’t just lose the ability to love when his heart turns completely black, he’ll literally lose himself as well. This is bad news for everyone because the death of Rumple doesn’t also mean the death of the Dark One. It just means the human side of the Dark One will no longer exist, transforming him into some wholly evil monster. 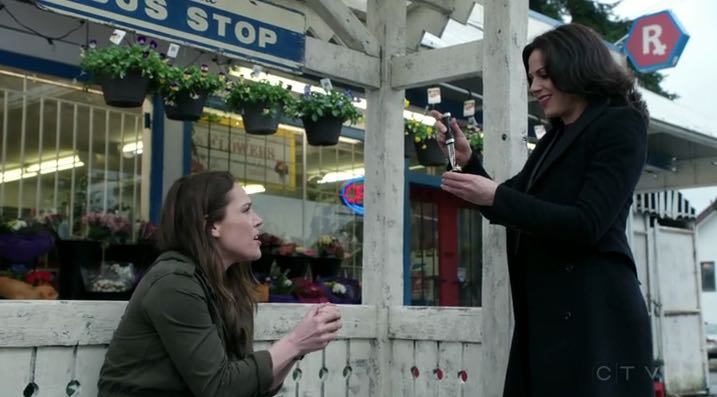 Regina, however, doesn’t blink an eye at this news. Instead, she happily taunts him while he’s down, and then steals the magic quill and the Author from him in one fell swoop. The fact that Emma didn’t turn dark, and therefore can’t provide the much needed secret ingredient of Dark Saviour’s blood for the magic ink, also fails to ruin Regina’s mood. I mean, who needs Emma’s blood when there’s plenty of Dark Savior magic running through Lily? And so, with a simple slash of Lily’s hand (she just happens to be conveniently hanging out at the only town bus stop), Regina has everything she needs to rewrite her happy ending. Too bad she didn’t factor in Lily’s dragon-shifting genes. 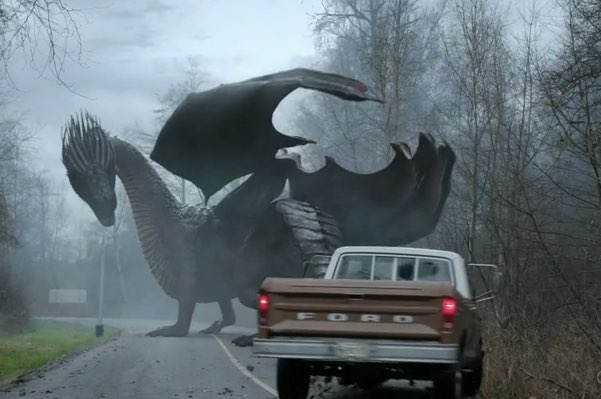 That’s right. Lily’s been pushed to her limit, and the next time we see her, she’s sporting the very large and very fire-breathing body of a dragon. When the Charmings and Maleficent manage to track her down, she’s more than a little out of control, and gives Snow White a good whack with her tail. Luckily, Emma arrives on the scene shortly after, and heals her wounded mother. This leads us into our second mother/daughter moment of the night, as Emma (having been nudged by Hook not to let her parent’s foolish but ultimately goodhearted attempts to protect her go to waste) admits that she’s punished her parents enough and that it’s time to forgive and forget. Hooray! That’s one happy reunion down, and one to go. 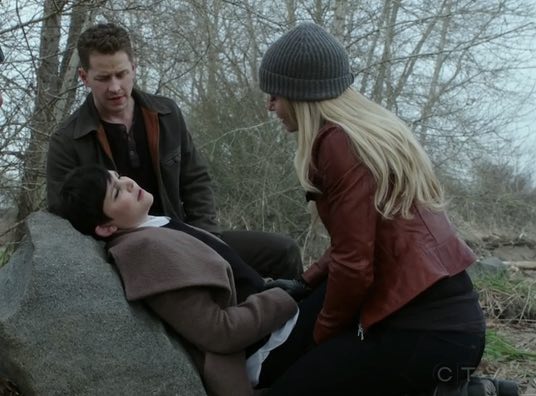 At the other end of the field, Maleficent and the now human Lily also have a heart to heart. Lily admits that she had expected Maleficent to be a “scary dragon bitch,” and that her much more loving and open attitude had taken her aback. She also confesses that she’s afraid she might just let Maleficent down, like she has everyone else in her life. Her “darkness is serious business.” But Maleficent, being a bit of an expert on the subject, simply states that, “I don’t mind a little darkness.” And so, Lily agrees to stick around for a week and see if this mother/daughter relationship thing can actually work. 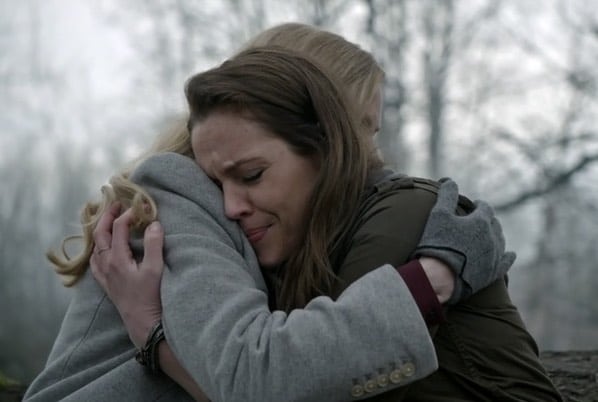 Back at Zelena’s padded cell, an oblivious Regina taunts her sis with her plans to write her out of existence until she’s reminded of her own mother’s callous abandonment of a helpless child. Changing her mind, Regina decides she doesn’t want the author to do anything after all, claiming she, “already (has) everything (she) needs.”

Unfortunately, the Author deems this ending too boring, and writes himself back to where Rumple is wasting away. Rumple’s all too pleased to have the Author back at his side, even providing him with a new empty book titled Heroes and Villains to begin writing in. As the episode closes, we see the Author write the phrase, “Once upon a time…” 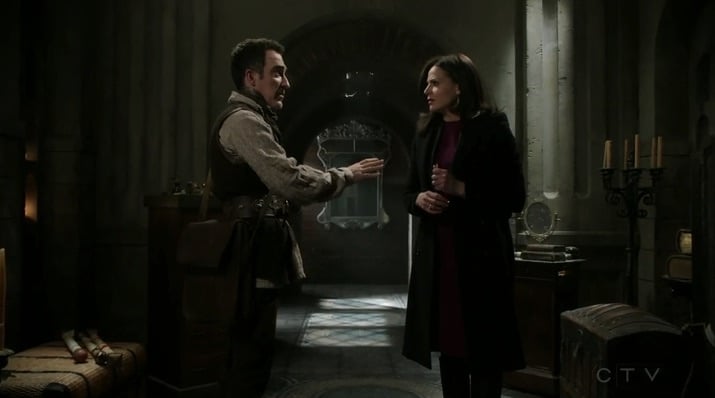 “It’s a shame. I mean, writing a happy ending for the evil queen…well…you’ve always been a favorite of mine. Very clear goals, plus totally damaged personality, with a self-destructive streak – a recipe for compelling.” – Isaac/the Author 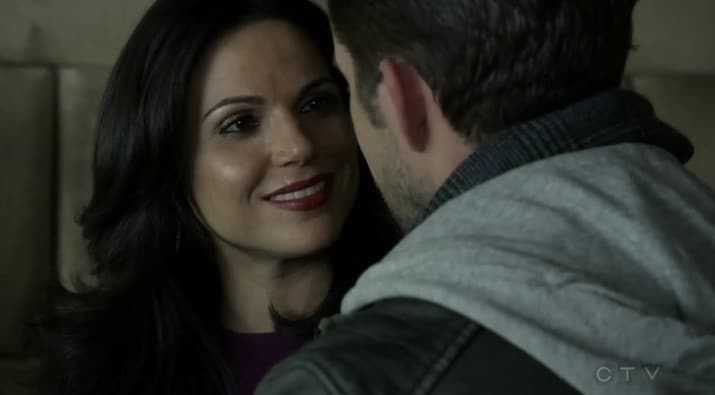 When Regina decides not to rewrite her ending, realizing that she already has everything she needs to make her happy – including Robin Hood.

“Don’t get it wrong greenie. Robin isn’t my happy ending. My happy ending is finally feeling at home in the world. Robin’s just a part of that world…I already have everything I need.”

Once in a while, Once Upon a Time just likes to remind us that Regina used to be the biggest baddie in town. In this week’s episode they had Regina murder a man on his wedding day…just for the hell of it.

The Author revealed that the illustration of Regina and Robin came from “a little experiment I did for another book that I never got the chance to write.” So…what is this mysterious book? He also tells Regina that “something is looking out for her.” Now who could be watching out for Regina and why? Any guesses?

What did you think of this week’s episode? Do you have any ideas as to the answers to the questions it raised? Are you as excited as I am to see what Rumple tells Isaac to write? Sound off below…

Our romance-themed entertainment site is on a mission to help you find the best period dramas, romance movies, TV shows, and books. Other topics include Jane Austen, Classic Hollywood, TV Couples, Fairy Tales, Romantic Living, Romanticism, and more. We’re damsels not in distress fighting for the all-new optimistic Romantic Revolution. Join us and subscribe. For more information, see our About, Old-Fashioned Romance 101, Modern Romanticism 101, and Romantic Living 101.
Pin this article to read later! And make sure to follow us on Pinterest.
By Rebecca Lane on May 8th, 2015

2 thoughts on “Once Upon a Time Recap: “Mother” – Lots of Mother/Daughter Drama”