It’s that time again! Once Upon a Time is back and that means recaps! As you all already know, this story arc will be focusing on the three new wicked women set upon tormenting the citizens of Storybrooke, aptly named The Queens of Darkness. Their entrance ties this great show with a certain film practice that I’m not sure I can enthusiastically approve.

Let’s take a moment to ponder the outrageously popular superhero franchises. They dominate at the box office, capture the imaginations of millions of people around the world, and are still going strong as a prominent movie genre. However, the superhero franchises tend to go in one creative direction as they age, which I would suggest is their ultimate downfall. As sequel follows sequel, leading to the popular trilogy format and beyond, one glaring fact ties them all together. As a superhero film ages (more and more sequels are filmed), the number of villains in each subsequent film also increases.

The entire superhero franchise seems to live by the idea that in order to “up the stakes” and keep a specific storyline alive and fresh, one must simply keep adding more villains. The more villains, the better! A film, such as Spiderman, might only focus on one villain in the first movie. Then, as it moves into the realm of the sequel, another one is added, so the hero must now defeat two enemies this time. Thus, with each following film, the hero must be up against an increasing number of villains in order to keep the story interesting…right?

Well, I for one, don’t particularly like this practice, as I’ve seen it destroy a number of superhero series when it gets out of hand. I guess the logic behind the idea is perhaps that more villains raise the stakes, or that villains are more entertaining to watch than heroes. Either way, I’ve seen it done over and over again, and prove to be the death knoll for a number of superheroes. The inclusion of too many villains has taken the onscreen lives of such heroes as Spiderman, the X-men, and the most recent Batman, among others. More doesn’t always mean better. And now…Once Upon a Time is following in these treacherous footsteps. After presenting story arcs that focused on only one major villain – Regina, Cora, Peter Pan, Zelena, the Snow Queen – up until now, Once Upon a Time is entering the uncertain territory of putting the hero up against multiple villains. One villain just wasn’t enough anymore. This season, Once Upon a Time introduces a trio of wicked women: Kristin Bauer von Stratten’s Maleficent, Merrin Dungey’s Ursula, and Victoria Smurfit’s Cruella de Vil, a.k.a. the Queens of Darkness. They are also joined by the always-tricky and currently evil-ish Rumpelstiltskin, a.k.a. the Dark One. We’ve got quite a packed house for this season’s story arc! I’m not passing any judgment yet, as I do love these three female villains, but I suppose we shall see if Once Upon a Time prevails in it’s use of many baddies, or follows in the tragic footsteps of so many great superhero series. But enough with my musings; let’s get on with the recap!

The midseason premiere served primarily as a kind of prologue, setting the stage for the numerous evil plotlines, so they can confidently charge forth with their mayhem in the upcoming episodes. Once Upon a Time is getting all its’ evil little ducks in a row. The main goal: to educate the audience about the relevant past of the Queens of Darkness, such as the details of how they met, and to maneuver them into position in Storybrooke, so they can begin enacting their villainous plans for our heroes to fight against. Of course, playing puppet master to all of the Queens’ doings is Once Upon a Times’ chief troublemaker, Rumplestiltskin. Now, on with the actual recap!

Flashback: “The Forbidden Fortress Many years ago… 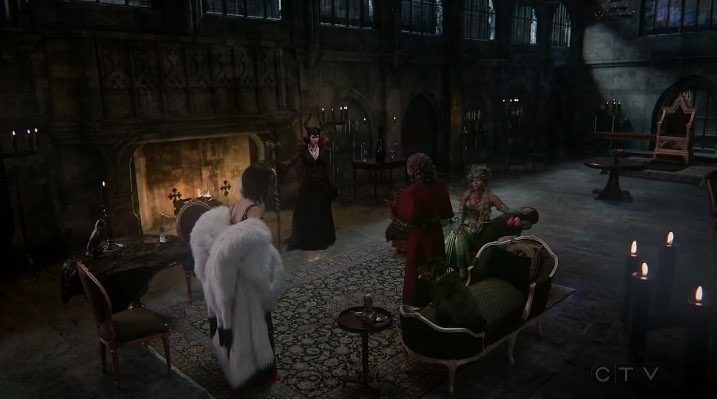 Playing puppet master as usual, Rumpelstiltskin is the mastermind behind the initial meeting of the trio. Ursula and Cruella de Vil show up unannounced one day at Maleficent’s evil lair, causing some palpable tension until Rumple shows up to explain why he’s brought them together. (In case you’re interested, this flashback takes place prior to the flashback in episode eleven of this season.) Rumple reveals that he needs the particular skills of these three ladies to obtain a dark curse (Unsure if this is the dark curse Regina unleashed to create Storybrooke, or something else. We’ll have to keep that in the back of our minds for later.). In return for their assistance, he will help each of the women achieve their own happy ending.

So, our plucky group of villains head off to the location of the curse’s hiding spot, Bald Mountain, where it is guarded by a number of “lethal magic obstacles”. These “lethal” obstacles are as follows: 1. bugs that Cruella disperses using her powers of persuasion, 2. a ring of fire, which Maleficent sucks up into her staff, 3. a…short distance…across which sits the pedestal cradling the curse, and which Ursula uses her tentacles to grab and then hand to Rumple. Quick Question: Why couldn’t Rumple do all of this by himself? Let’s be honest, “lethal” seems to be a bit of an overstatement in this situation. He’s certainly demonstrated much greater magical abilities in the past than those required here. Hmm… 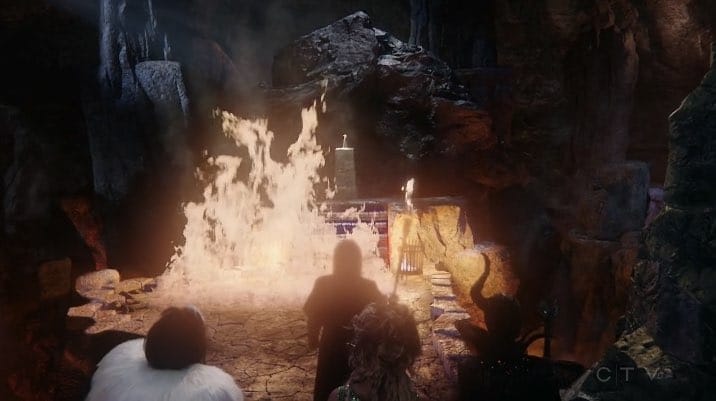 Once Rumple obtains the curse, he quickly skedaddles, 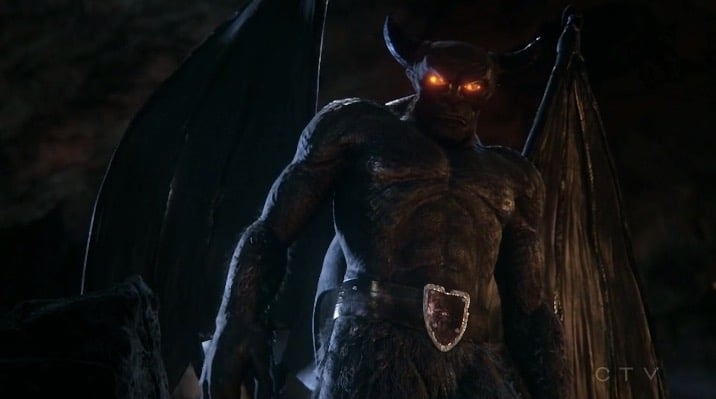 leaving the Queens stuck behind with the final and actually lethal obstacle, the demon Chernabog. But, even then, the obstacle proves to be less dangerous than expected, as it basically just stares at the trio until they escape through a convenient crack in the ceiling.