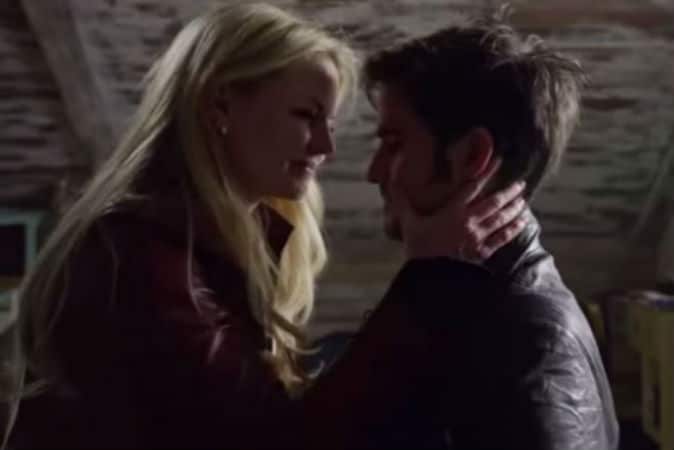 For Once Upon a Time’s grand season finale, they pulled no punches. We’ll get to see a topsy-turvy version of the characters in Storybrooke, a fantastic Romantic Moment between Hook and Emma, and the very thing the show’s teasers have been hinting at all season: Emma crossing over to the dark side. This season’s finale definitely stands out as a whopper amongst the previous ones. It also makes me ridiculously excited for next season (one name: Merlin). But I’ll get into that in a minute.

When the gang is too late to stop Isaac from finishing the new book, Henry finds himself suddenly alone in Storybrooke. During his search for his family he comes across Isaac’s book, a bestseller. Isaac appears to have gotten 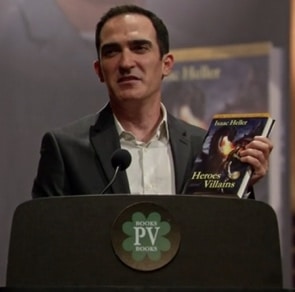 his happy ending of fame and fortune. Approaching Isaac at a large gala, Henry threatens him with being locked back in the pages of the book in order to gain information on what happened to the citizens of Storybrooke. Isaac reveals that they are all living inside the new book. In a fast move, Henry jumps inside the book himself, dragging Isaac along with him. 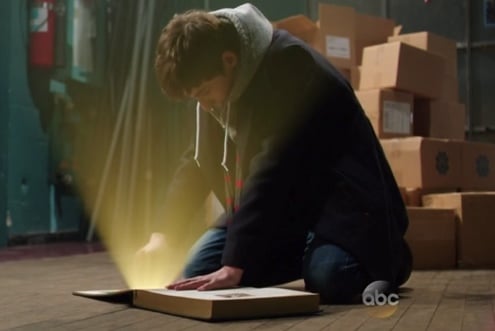 Henry takes center stage in this thrilling finale. Remember when we saw Isaac beginning his new story at the end of last week’s episode? Well, he didn’t pull any punches with Heroes and Villains. Our new tale is set in the familiar Enchanted Forest, but basically every story from before has been turned upside down. As you may have gathered from the title, the heroes are now villains and vice versa. Poor Henry has his hands full too. We basically get a twist on the theme from Season 1 when Henry had to convince Emma that all of the fairy tales were real. Only this time he’s trying to convince Regina and then Hook that they’ve been written into a different story and, like in Season 1, have been removed from their real lives. This job on it’s own would be daunting for any youngster, but Henry gets to deal with a bloodthirsty Snow White and the imminent wedding between Robin and Zelena as well. 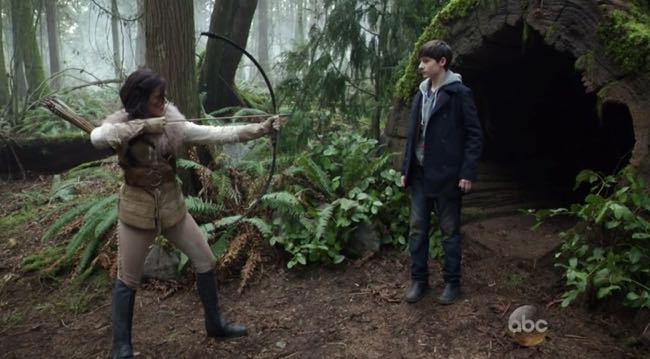 With this topsy-turvy version of things we get the chance to see all of our favorite characters playing brand new roles! I was thoroughly entertained by the picture of Charming as the hulking henchman, Regina as the sassy bandit and Rumple as the charming white knight, just to name a few.

But, remember, Isaac is inside the book too. Not wanting his happy ending to be changed, Isaac makes moves of his own to make sure things stay the way they are, including telling the Evil Snow White about a certain boy who’s helping her arch rival Regina. We also learn that at least in the case of Regina and Snow, their stories have been literally switched. Regina is now the one who got Snow’s love killed when she was younger. 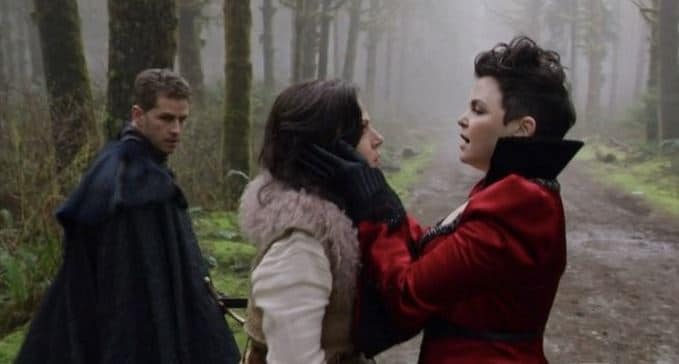 One character who hasn’t changed, however, is Emma, whom we discover is being held captive by Snow and guarded by the dragon Lily in a tower placed on an island in the middle of the ocean. Apparently, 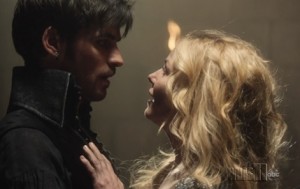 Rumple decided to punish Emma by leaving her with the knowledge of the truth. Our savior is fully aware of the dire circumstances, but has no power to change them.

Following her rescue, Emma ran into Hook for the “first time,” during which they make googly eyes at each other and finally acted like a normal couple meeting for the first time. After this, they turn back into the Emma and Hook we love when Emma proceeds to give Hook a personal fencing lesson (oooooh).

On the other side of the forest, Rumple and Belle are cooing over their newborn baby, blissfully 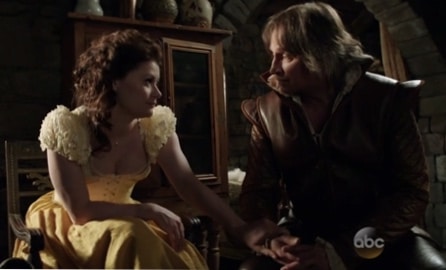 playing the enamored married couple. That is, until Isaac shows up to rain on their parade. He reveals Baelfire’s actual fate in this new story and warns Rumple of Henry’s meddling as well as his plans to stop the impending nuptials of Robin and Zelena. While Rumple is torn in his decision of what to do next, Belle assures him that as a “hero,” whatever choice he makes will be the correct one. 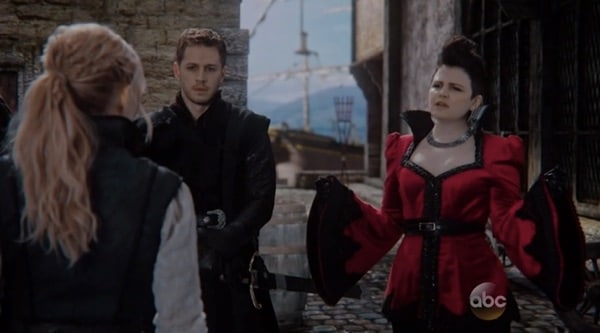 More excitement awaits our heroes as they return from rescuing Emma. Who should they run across but Evil Snow White, who has been chomping at the bit to get a chance to kill the “boy.” The group finds themselves fighting off both of Emma’s parents, a truly strange sight. In an effort to save the day and the beautiful Emma, Hook offers to fend off Charming while Emma gets Henry somewhere safe. 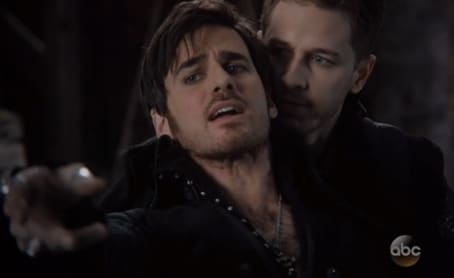 Unfortunately, Emma’s lesson apparently didn’t stick, as Hook is run through with a sword while Emma looks on in horror. But there’s no time to grieve, as Henry and Emma have a wedding to stop. Meeting back up with Regina, who’s not entirely cheering over the idea of crashing Robin’s wedding, the trio dash off (after Emma convinces Regina to give true love one last chance).

At the church, Regina faces the bride and groom while Emma stands against Rumple. After a few moments of skillful swordplay, Rumple says “the heck with it” and uses magic to slam Emma against a rock. Henry though is ready to pick up right where his mom left off. Regina, torn between fighting to get back the man she loves and protecting her son, ultimately chooses Henry just as Rumple is going in for the kill. The church bells ring as Regina lies wounded from Rumple’s blow, signaling the end of the story, when…Henry comes to the rescue (man this kid’s really taking the lead here in this episode).

The magic quill glows as Henry reaches for it, hinting that he’s meant to be the new author, but Isaac taunts him with the fact that he has no ink to write with. But wait! Since the blood of a Dark Savior brought about this world, couldn’t the blood of a Light Savior work in this upside down situation? Henry quickly dabs the quill into Regina’s blood and writes everything back to the way it was before Isaac interfered. And thus, we find ourselves back in Storybrooke. 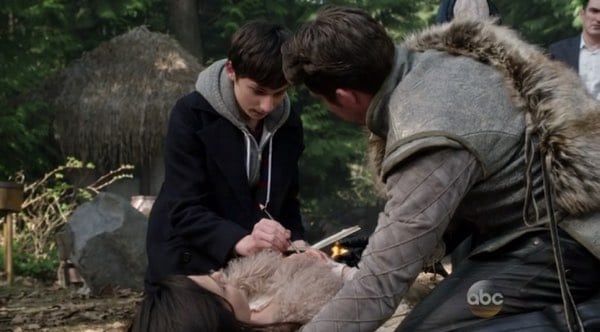 First things first, are all the dead people still dead? Emma checks that one out right off the bat, seeking out Hook. When she sees he’s alive and well she gives him a very big “thank you,” jumping on top of him…on 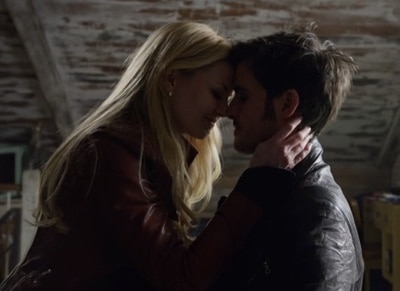 top of a bed (risque…) and saying, “I…want to thank you for sacrificing yourself.” However, other couples are not having such good luck. Rumple is nearing death, meaning The Dark One will soon roam free of any moral human soul. As he speaks his last words with Belle at his side, he reflects on their happy life in the other story. Belle, however, sets him straight about their love, saying, “I was already in love. Everything we had in the book…you could have had here…I knew what I was getting. I wasn’t going to pull back.” She then confesses that she doesn’t love Will, and swears she’s not going to let Rumple die without a fight.

Belle finds everyone celebrating their recent victory at Granny’s, and alerts them to Rumple’s condition. The Apprentice, who was freed from the Sorcerer’s Hat earlier, suggests they use that same hat to suck out all of the darkness from Rumple’s heart. Unfortunately, that much darkness is a lot to handle, and it immediately jumps from the hat to the Apprentice. Thankfully, Emma quickly rids him of it, only to have it fly off into town. According to the Apprentice, only one person can stop this Darkness for good – Merlin…yeah, the famous wizard from Camelot.

In the meantime, Emma and the rest of the gang decide they can’t just let the darkness run loose, so they go hunting for it. But this Darkness is no slouch. It manages to find them first, and makes a straight shot for Regina. During the melee, Emma realizes that the only way to contain the Darkness until they can find Merlin is to tether it to a human host. So, Emma does what she does best. After finally telling Hook that she loves him, Emma uses the Dark One’s dagger to suck up the mass of dark energy, inviting it to attach itself to her. 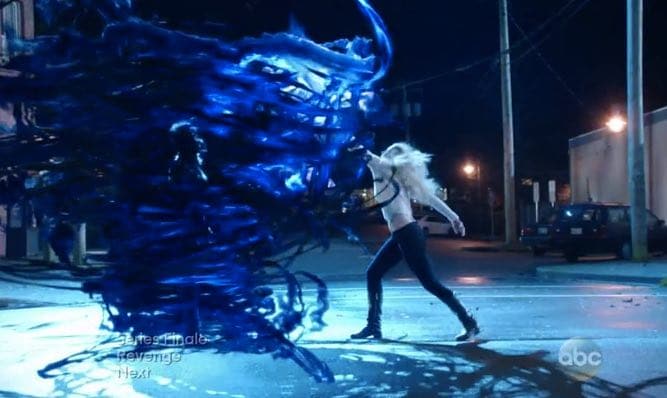 We see Emma enveloped in the Darkness, which then vanishes in a flash of light…leaving behind nothing but the dagger…with Emma’s name inscribed on the blade. All hail the new Dark One: Emma Swan!

*Don’t worry. After returning to Storybrooke, Regina made sure Zelena was locked up in her padded cell where she could no longer meddle in Robin and Regina’s relationship.

*Apparently, Isaac took over as the new author in 1966, the same year that Walt Disney (perhaps the previous Author?) died.

*Isaac’s excuse for derailing the story and allowing the Charmings to transfer Emma’s darkness to Lily: Charming reminded him of a “bad boss” he had…ooookaaay.

*Lily’s necklace is apparently a piece of her eggshell, and the only clue as to who her father is. (Any ideas?)

*Who are they going to cast as the famous wizard, Merlin?

What did you think of this week’s episode? Are you excited/nervous/curious about seeing Emma as the Dark One? Who do you think should be cast as Merlin? Sound off below…

Our romance-themed entertainment site is on a mission to help you find the best period dramas, romance movies, TV shows, and books. Other topics include Jane Austen, Classic Hollywood, TV Couples, Fairy Tales, Romantic Living, Romanticism, and more. We’re damsels not in distress fighting for the all-new optimistic Romantic Revolution. Join us and subscribe. For more information, see our About, Old-Fashioned Romance 101, Modern Romanticism 101, and Romantic Living 101.
Pin this article to read later! And make sure to follow us on Pinterest.
By Rebecca Lane on May 14th, 2015