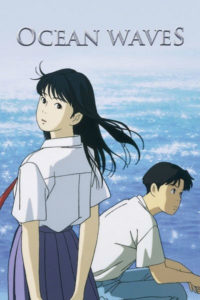 Ocean Waves was the first Studio Ghibli film not to be directed by one of the studio’s co-founders, namely Hayao Miyazaki or Isao Takahata. Reins were handed over to Tomomi Mochizuki, a young, up-and-coming animator, and the whole film/project was thought of as an avenue for the younger generation of animators at Studio Ghibli – apprentices to the masters – to do their own work.

The film is a social realistic snapshot of everyday life, full of its many mundane dramas. Here be no dragons, no magic, no spirits, no fantastical realms, no grand apocalyptic narratives, no numinous encounters. Here be just life and the ups and downs and ebbs and flows of being a teenager in the city of Kōchi on the island of Shikoku in Japan in the 1990s. A girl from Tokyo lands in this smaller pond, and her arrival sends lasting ripples through the local high school and its student body, especially two best friends, who both find themselves infatuated with the same girl. Yes, Studio Ghibli made a film based around that well-used and much-abused teenage trope of the love triangle. 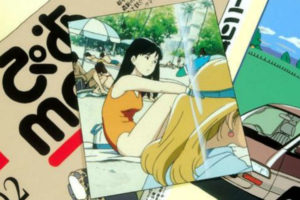 The film opens with a young man standing on a train platform, gazing across the tracks, and suddenly seeing a face on another platform that looks familiar. The face and its person disappear before he can confirm the identity. But just the near sight of her sets off a nostalgic narrative.

He is Taku Morisaki, now studying in Tokyo, but originally from Kōchi. She – the near glimpse across the tracks – is Rikako Muto, the girl who shook up his life in high school. The film is a series of vignettes, flashbacks, and snapshots of encounters with Rikako during their high school years, with Taku’s voiceover narration.

Rikako transfers to Taku’s high school midway through their junior year. Immediately, Taku’s best friend, Yutaka Matsuno, undertakes the responsibility of showing her around. He becomes her main contact at the school. Taku recognizes his friend’s interest so holds his own in check and keeps his distance.

Rikako is beautiful, intelligent, gifted, athletic, manipulative and a major snob. She is disdainful of the hicks in Kōchi with their strange dialect. She longs for Tokyo and her life there and her father. Her parents are divorced, and she blames her mother. Jealous and intimidated, the girls at school dislike her. 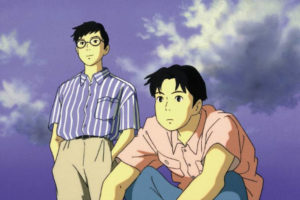 And the vignettes unfold – a class trip to Hawaii, a disastrous unplanned tour to Tokyo to track down Rikako’s dad, and on it goes. All the little dramas and melodramas accompanying growing up. And whatever growing tenderness exists between Taku and Rikako is thwarted by insecurities and friendship loyalties and the follies of youth and inexperience.

Nothing Happens and Yet…

Ocean Waves is, in many ways, a quiet film, a still film, a gentle film. Nothing much actively happens. It is mundane, incredibly mundane. And yet, therein lies its poignancy, its subtlety, and its sublimity. As with many of Studio Ghibli’s films, it focuses on the very real emotions and reactions and outbursts of its human characters. It becomes something of a meditative look at maturation.

A sympathetic narrator, Taku remains an honorable, grounded young man, trying to do right by himself, his family and his friends throughout. Rikako is indeed a snob, but her rejection of others are a reflection of the rejections and hurts in her own life. Yutaka saw her first and called first dibs, but maybe love, mature love, doesn’t work like that. And maybe, just maybe, given time and perspective and maturation, that woman on the other side of the tracks will finally look up and see and accept that honorable man across from her. He has always seen her as she is, even when she couldn’t and wouldn’t see it herself. 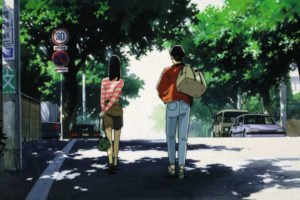 Does she look up? See the movie and find out!

Our romance-themed entertainment site is on a mission to help you find the best period dramas, romance movies, TV shows, and books. Other topics include Jane Austen, Classic Hollywood, TV Couples, Fairy Tales, Romantic Living, Romanticism, and more. We’re damsels not in distress fighting for the all-new optimistic Romantic Revolution. Join us and subscribe. For more information, see our About, Old-Fashioned Romance 101, Modern Romanticism 101, and Romantic Living 101.
Pin this article to read later! And make sure to follow us on Pinterest.
By Jessica Jørgensen on September 22nd, 2017