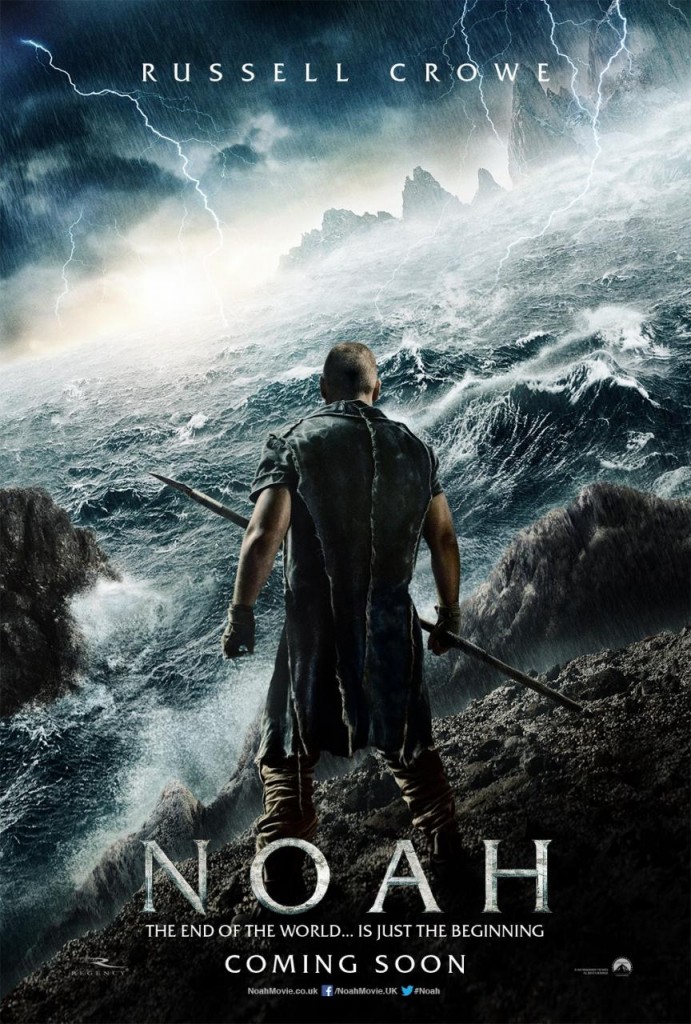 Because of the intense dislike I had for this film, I debated whether or not I would write a review on it. In the end, I decided, why not? Noah was a film I had been looking forward to for months. Great Director: Check. Great cast: Check. Stunning Visuals: Check. Unfortunately the movie did not live up to its hype.

From bizarre creative choices, to a mish-mash of genres with over the top movie clichés thrown in and a tediously long drawn out ending, I couldn’t wait for the movie to end.

And not only did it disappoint, but the movie was so bad I nearly walked out. From bizarre creative choices, to a mish-mash of genres with over the top movie clichés thrown in and a tediously long drawn out ending, I couldn’t wait for the movie to end.

If you aren’t already familiar, Noah tells the Biblical “adaptation” of a man who is called of God to build an ark because of the wickedness of men to rescue all of the animals of the Earth and leave behind the humans because they don’t deserve to live. If you’re familiar with the story then you know the basics; but unfortunately beyond Noah building a boat to save the animals, there isn’t much actual resemblance to the story as told in the Bible. Creative liberties is one thing (The Ten Commandments for instance made up a good portion of its story not based on scripture, which still made for an epic, entertaining spectacle), going off in an epically peculiar tangent (which is what Noah does) is another.

In this version, Noah builds the boat with the protection of fallen angels who have been cursed by “The Creator” for helping humans in the Garden of Eden and are now stuck in a rock like form that looks like a literal mix between the Ents in Lord of the Rings and Gumby. As silly as that sounds, I actually didn’t mind this “fantasy” approach to the story…much. They were at least interesting despite the strange appearance and obvious homage to Tolkien. Most people will probably find them hilarious in a bad way since they’re appearance is so cartoonish and almost cheesy, but I didn’t mind them…much. I say this in all fairness, because there aren’t that many other things I “liked” in the film.

In all, however, I actually didn’t mind most of the first half of the film. I didn’t love it (Methuselah the Prophet is portrayed as a drugged out recluse hiding out in a cave drinking tea who’s main objective is to eat some berries. Okay…), but I didn’t hate it either. Rather, it was tolerable. There are actually redeeming qualities to this film (before the second half of the film train wreck happened).

For instance, the creation montages as well as the Genesis flashbacks of Eden, Cain and Abel and more are quite memorable. From a visual perspective, these scenes were strange yet disturbingly beautiful. Aronofsky has a gift for presenting beauty in an odd way. Here, he almost succeeds. Not only that, Emma Watson gives a powerful performance as Noah’s adopted daughter Ila. Orphaned as a young girl but rescued by Noah, the two have a strong father/daughter bond. Unfortunately for Ila, because she was injured as a child when the rest of her family were killed, she can’t have children, which is more than a little obstacle between her and Shem (Noah’s son who she loves). She wants him to have a normal life and have children which she can’t give him. But through Methuselah’s healing touch, she ultimately is able to get pregnant (which does lead unfortunately to the hideous second half of the film).

On top of that, the special effects were mostly good. It’s important to note that not one animal was used in the filming of this movie which has been praised by various animal rights groups. Without any real animals, the scenes of the animals boarding the ark were still quite a sight to see. And frankly it was nice to know that because no animals were used in the filming of the movie, Aronofsky stayed true to one of his themes in the film about the mistreatment of animals. The CGI mostly looked very real. I more than cringed when all the snakes boarded since it was a creepy thought. And the flood sequences were well done, if not too long (the film suddenly turned into an action film with bad clichés).

But that’s where the strengths of this film end. To review this film, I have to discuss the second half of the film. And basically what’s wrong with the film comes down to five things.

First of all, Tubal Cain, the “villain” of the story was so ridiculous to the point of being overboard cliché. To prove he’s the bad guy, he spends his time throughout the story eating meat and practically laughing maniacally about how it makes him a man. Now, I’m mostly a plant based eater myself, but seeing this over the top portrayal of people who eat meat was absurd. As the film progresses, this guy never dies. In fact, he actually survives the flood like a cockroach. He plots in secret with Ham (who’s still upset about the loss of a “girlfriend” who Noah let be stampeded to death) to murder Noah. It’s just so stupid to see this guy hide on the boat after having simply walked around the Rock people, putting a hole in the boat with an axe (and then filling the hole with a rock – because that would work) and plotting Noah’s demise. He really had no point other than to show how wicked people had become. This cliché driven character was pointless and badly written.

Glossing over point two quickly, I’ll say that this was a very strange creative choice. I kept waiting for Ham to meet the girl who would be his wife throughout the film. But it never happened. And basically it never happens because of point three! Noah decides that humankind is too wicked to survive. So in a dark twist he decides that he and his family will die, rather than survive. So when he learns of Ila’s pregnancy he becomes a full on psycho (and I mean a raving lunatic). He tells Ila and his wife (as played by Jennifer Connelly who does not agree with Noah’s insane perspective) that if the babies are born as girls he will have to murder them. What perhaps you think will be a brief self-assessment from Noah, becomes much longer. In fact, it literally becomes the rest of the film. From creepy, asinine shots of Noah hiding in the shadows spying on pregnant Emma Watson to his bugged out eyes and Jennifer Connelly’s incessant screaming at the end (with Ham and Cain plotting in secret), this movie became unpleasant to watch and near nigh unwatchable.

Unfortunately from the flood on, the movie just dragged on and on and kept going and going and going. Eventually twin girls are born, which then becomes a psychotic sequence of Noah running around the boat with knife in hand ready to stab the babies in the head. Yes, I kid you not. I personally found this to be unpleasant, unnecessary and disturbing. This whole creative choice was so painful and ridiculous to watch I almost walked out. Even after he decides not to go through with killing the babies he actually spends the rest of the film regretting his “weakness” to let the babies live. That is except for the last two minutes when Ila convinces him his choice was okay. And then the movie ends.

Around the net there have been numerous complaints from people of various religions because of biblical inaccuracies and the almost psychotic interpretation of Noah as a prophet. Fair enough. But to also be fair on an objective level, I’m not sure that’s really the problem when looking at this merely as a film. Say you’ve never read the Bible, never even heard of the story of Noah and the Ark, this movie would still be horrible and painful to watch. On the plus side, it’s easy to imagine this becoming a cult hit, but for all the wrong reasons. On a second watch, the film could even be funny. But no, that’s being too generous. By the end, Noah had become so obnoxious as a character I wished someone would have just pushed him into the ocean. It would have made for a better film.

Our romance-themed entertainment site is on a mission to help you find the best period dramas, romance movies, TV shows, and books. Other topics include Jane Austen, Classic Hollywood, TV Couples, Fairy Tales, Romantic Living, Romanticism, and more. We’re damsels not in distress fighting for the all-new optimistic Romantic Revolution. Join us and subscribe. For more information, see our About, Old-Fashioned Romance 101, Modern Romanticism 101, and Romantic Living 101.
Pin this article to read later! And make sure to follow us on Pinterest.
By Amber Topping on April 3rd, 2014