Romantic comedy…practically the only type of comedy that I watch. I’ve been reviewing romantic comedies from the 90’s lately and it’s bringing back all the memories and nostalgia from around that time. I’ve really enjoyed re-watching movies I haven’t seen in years, especially from this forgotten genre.

I distinctly remember watching Never Been Kissed mid-week (a school night!) with a bunch of my girlfriends in 1999. In fact, half of my high school grade saw the movie because we quoted the film ala Clueless style. So for me and mine, Never Been Kissed is very much a cult favorite.

Somebody once said, “To write well, you have to write what you know.” 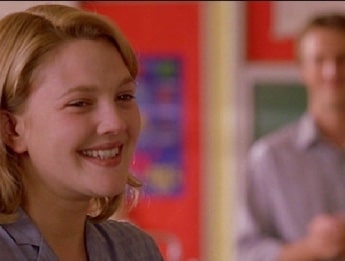 Never Been Kissed is a fun teen comedy filled with tropey high school shenanigans. The film centers on 25-year-old Josie Geller (Drew Barrymore), a budding reporter for the Chicago Sun Times. Trying to prove herself a legitimate writer, she goes undercover at a high school to try and find a compelling story to launch her writing career. Josie, unfortunately, was the ultimate nerd in high school and practically still suffers the humiliation of it many years later.

At 25, Josie is studious, kind, dowdy and naïve. She’s also a grammar-phobe and says things like “Pastoral means set in the country, originally seen in the Eclogues of Virgil. It´s from the Latin ‘pastoralis’, to graze.” Surely her cover is in jeopardy because what high school student knows that? Or at the very least, articulates it the way a college professor might.

In any case, Josie has also never had a real relationship and has – as the title suggests – never been kissed. As she articulates, “The right guy, he’s out there. I’m just not gonna go kiss a whole bunch of losers to get to him.” Power to you Josie. I have a feeling your first kiss is coming and it’s going to be good!

That thing, that moment, when you kiss someone and everything around becomes hazy and the only thing in focus is you and this person and you realize that that person is the only person that you’re supposed to kiss for the rest of your life, and for one moment you get this amazing gift and you want to laugh and you want to cry because you feel so lucky that you found it and so scared that that it will go away all at the same time.

Returning to high school is a nightmare. Josie is as awkward as ever, has no idea how to dress or even interact with teenagers in a way that is considered cool. She is immediately branded a nerd, making her efforts to find a subject to write a winning article about exceedingly difficult.

I Can Recognize A Cry For Help When I See One

Unfortunately, a few weeks in and it’s clear to Josie’s editor Gus (John C. Reilly) that something drastic must be done. Josie’s brother Rob (David Arquette) also realizes the same thing. As uncool as Josie was in high school, Rob was the school’s most popular jock. In order to help his sister, he also goes undercover at the school. After all, he says, “All you need is for one person to think you’re cool, and you’re in.” Rob is right. Within days, Rob has managed to convince the entire school that Josie is cool. Finally, she’s in. The only problem is that she was welcomed and accepted by the school nerds, who now find her defacto to the cool kids an insult.

However, everything isn’t all bleak. Because she can quote Shakespeare and at times presents as more mature than her peers, Josie catches the eye of her handsome teacher Sam Coulson (Michael Vartan). Under the guise of discussing Shakespeare, there is low-key (and it should be said inappropriate) flirting and shared confidences. At one stage Sam tells Josie that when she’s older boys will be lining up to date her. When she replies it’s his job as her teacher to essentially boost her confidence, he knowingly admits that it’s precisely because he’s her teacher that he shouldn’t be saying it. He’s right of course, but we know Josie isn’t 17 and they’re so cute and awkward it’s adorable.

All of you people, there is a big world out there… bigger than prom, bigger than high school and it won’t matter if you were the prom queen, the quarterback of the football team, or the biggest nerd in school. Find out who you are and try not to be afraid of it.

Unfortunately, when Josie’s editor realizes that Sam and Josie are getting closer, he forces her to make Sam (and inappropriate student/teacher relationships) the subject of her expose. Josie refuses, but it’s too late. Things snowball out of control and while she get’s to do-over her final high school year, it comes at a great personal cost. 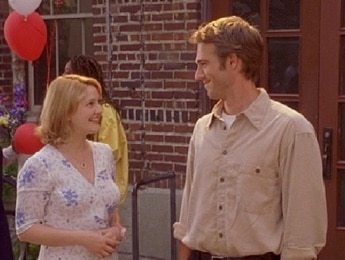 Unfortunately, Never Been Kissed doesn’t offer anything original to the genre. However, the film is eternally optimistic, fun and all the brighter because of Drew Barrymore. As she did in Ever After, she manages to create a lovable character that just wins you over. Josie is absurd, makes you cringe with secondhand embarrassment, is clumsy and at times completely clueless, despite her 25 years. Yet Drew is impressive as she plays three different characters – an awkward teenager, a pseudo confident, cool kid and herself – a shy, scholarly 25-year-old. Drew seems to have done some of her best work in the ’90’s with earnest, bighearted performances. 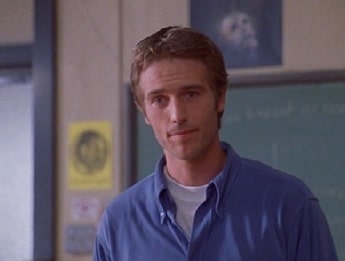 In a role that paved the way for his eventual casting in J.J. Abrams’ hit TV show Alias, Michael Vartan is the hunkiest high school teacher I’ve ever seen. Sam Coulson takes an interest in his students – Josie in particular – and is keenly aware of his ill-advised feelings. He doesn’t have much to do, but he is good to look at. He has the best I’m-so-sad-we-can’t-be-together face and looks amazing in a suit wearing the aforementioned expression.

David Arquette, John C. Reilly and Molly Shannon all had various shades of comedy to the ensemble. The real star though is Drew Barrymore and everyone is really just basking in her vibrant light. Octavia Spencer, Jessica Alba, and Leelee Sobieski also star.

Sorry I’m Late… It Took Me Forever To Get Here 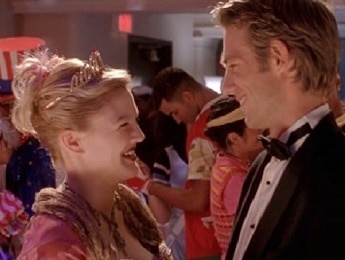 Overall, Never Been Kissed is a sweet, goofy romantic comedy with some surprising insights about life in high school. While it’s in no way groundbreaking cinema, it’s endearing and guarantees more than a few giggles. Most surprising is the fact that Drew Barrymore could actually pull off playing a 17-year-old! She has a youthful appearance that makes it easy to suspend belief.

Finally, Never Been Kissed has one of the best first kisses ever! Michael Vartan kind of just strides into the kiss. The eventual kiss is well worth the wait!

Where to Watch: Never Been Kissed is available for sale, Netflix DVD, or streaming on Amazon.

Have you watched Never Been Kissed? What did you think? Comment below and let me know!

Our romance-themed entertainment site is on a mission to help you find the best period dramas, romance movies, TV shows, and books. Other topics include Jane Austen, Classic Hollywood, TV Couples, Fairy Tales, Romantic Living, Romanticism, and more. We’re damsels not in distress fighting for the all-new optimistic Romantic Revolution. Join us and subscribe. For more information, see our About, Old-Fashioned Romance 101, Modern Romanticism 101, and Romantic Living 101.
Pin this article to read later! And make sure to follow us on Pinterest.
By Naazneen Samsodien on September 28th, 2017