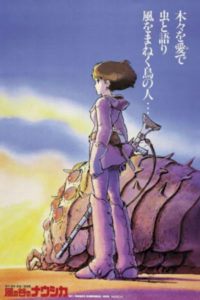 Vintage Film Review: Nausicaä of the Valley of the Wind (1984)

Nausicaä of the Valley of the Wind is a classic. It’s the seminal sci-fi anime that marked the beginnings of the internationally renowned Studio Ghibli. Although the film is technically a precursor to the formation of the actual studio. The film marked the first collaborative efforts of Hayao Miyazaki (director), Isao Takahata (producer), Joe Hisaishi (music composer) and Toshio Suzuki (producer). The combo proved so enriching and successful that Miyazaki, Takahata, and Suzuki officially formed Studio Ghibli the following year in 1985. They bought Topcraft, the animation studio that made Nausicaä of the Valley of the Wind and renamed it Studio Ghibli. And a legend was born. 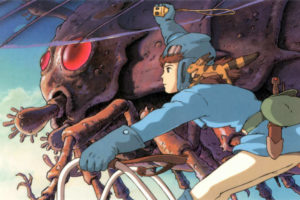 Nausicaä of the Valley of the Wind takes place in a futuristic, post-apocalyptic world. The earth is covered in a vast toxic jungle with poisonous spores, and giant, destructive insects run rampant. The film follows the struggles of Princess Nausicaä. Throughout the film, she attempts to protect her people and her valley from the ever-spreading toxic jungle, warring human factions, angry insects, and even another eventual apocalypse.

When a cargo aircraft from the kingdom of Tolmekia crashes in the remote and peaceful Valley of the Wind, events trigger a threat to the entire planet and thrusts the valley’s Princess Nausicaä into action. The ship contains the remains of a lethal bioweapon, a so-called Giant Warrior, which brought about the apocalypse a millennium ago. Tolmekia has plans to resurrect the warrior and harness its power to destroy the toxic jungles and the insects and all opposition. Soon Tolmekian soldiers descend upon the peaceful dale, led by their ruthless warrior princess Kushana.

This is now war. Nausicaä is a prisoner. Fighters from the kingdom of Pejite enter the fray, seeking revenge for the kidnapping and death of their own princess at the hands of the Tolmekians. Nausicaä ends up in an alliance with Asbel, Prince of Pejite, and they embark on a mission to stop the madness and the murderous escalation. And in the process, they discover the secret of the toxic jungle and its insects. But I will say no more on that point.

Nausicaä – she jets around on her jet-propulsion glider, seeks understanding, favors peaceful solutions and mediations over the shoot-first-ask-questions-later impulse. Although she does lose her temper at one point resulting in some lethal consequences. Her ruby earrings tinkle in the wind. She shows mercy and understanding to insects and humans alike. She also shares a special bond of sorts with the Ohmu, giant woodlouse-type creatures. This princess scavenges in the poisonous woods to benefit her folk. She also gives flying lessons to the children and bravely faces enemies to protect her people and the planet. Suffice it to say, she is beloved by the people of the Valley of the Wind. Not to mention many anime fans everywhere.

The Studio of the Desert Wind 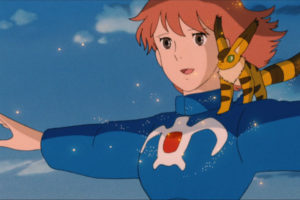 Ghibli is a desert wind – that’s what the word means. Ghibli was also the name of an Italian aircraft during WWII. It is, thus, not very surprising that Studio Ghibli should get its name from an airplane and a wind, especially when you consider the themes and tropes that recur throughout the studio’s productions. That the studio’s forerunner should be about a pilot princess, who glides around, following the wind, well, the tone was set. Many of the elements now considered characteristic of Miyazaki films are present in spades in Nausicaä of the Valley of the Wind.

Strong female leads, wind, airplanes and flying, animism, environmentalism, shades of grey in terms of good and bad, attention to human details (a toss of the head, a kick of the shoes – mundane human movements), serenity, poignancy, even tinkling, ruby red, drop earrings, yes, many beloved characteristic elements are present in Nausicaä of the Valley of the Wind. It is not a seminal and enjoyable work for nothing.

So, if you like your princesses with guts, gumption, and spunk, coupled with humility and compassion, Nausicaä might just be the princess for you. Content Note: Rated PG for mild violence and scary scenes. The scene with a resurrected Giant Warrior is especially intense. I wouldn’t recommend this for little kids, preschoolers – much of it would be over their heads anyhow.

Our romance-themed entertainment site is on a mission to help you find the best period dramas, romance movies, TV shows, and books. Other topics include Jane Austen, Classic Hollywood, TV Couples, Fairy Tales, Romantic Living, Romanticism, and more. We’re damsels not in distress fighting for the all-new optimistic Romantic Revolution. Join us and subscribe. For more information, see our About, Old-Fashioned Romance 101, Modern Romanticism 101, and Romantic Living 101.
Pin this article to read later! And make sure to follow us on Pinterest.
By Jessica Jørgensen on October 7th, 2017

2 thoughts on “Nausicaä of the Valley of the Wind (1984): Miyazaki’s Seminal Sci-Fi Anime”