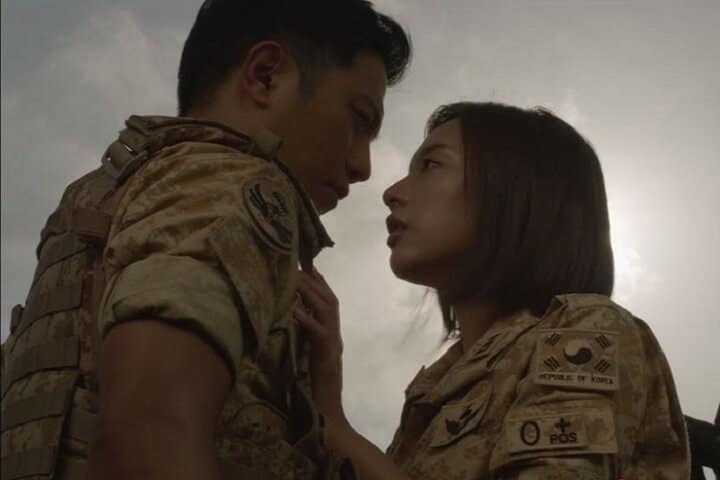 THE EPISODE: The middle of episode 10

THE ROMANTIC MOMENT: Myung-Joo brings sunscreen for Dae-Young and they (almost) kiss!

When I first heard about Descendants of the Sun I was skeptical. When choosing a new Korean Drama to watch, I lean towards historical shows or romantic comedies. So when I started to watch the show after hearing about its popularity, I almost didn’t stick with it. I am so glad I did. Descendants of the Sun is not just an army/medical drama – there are also multiple love stories, each with their own complexities and sweet moments. Not to mention, I introduced a guy friend to Korean Dramas through this show and he loved it!

Related Post: Romantic Moment of the Week – Descendants of the Sun and Shoelaces

Myung-Joo is the only daughter of Lieutenant General Yoon. Her father disapproves of her relationship with Dae-Young throughout the series because he thinks his daughter can do better than a sergeant. As you might imagine, Myung-Joo and Dae-Young have a relationship wracked with ups and downs, as Myung-Joo’s father tries to keep them apart, but they ultimately remain by each other’s side.

There were so many moments I could have chosen for this post, but in the end, I decided upon this particular moment because of its lightness and touch of humor. This couple had many intensely emotional scenes throughout the series. These were beautiful. Yet this moment is lovely in a different way. While many scenes with Myung-Joo and Dae-Young were intimate and romantic, there were few not edged with pain or the looming threat of separation. Dae-Young and Myung-Joo were so often fighting to stay together, that I wanted to focus on a lighter moment, where their steadfast love runs quietly underneath.

Dae-Young is working in a minefield when he looks up and sees Myung-Joo walking towards him. Frowning (which seems to be his favorite expression, even when he’s happy) he scolds her saying: “You really don’t listen. It’s dangerous, so I’m sure I told you to stay put where it was safe.”

She walks past him nonchalantly insisting that safe is boring. As Dae-Young’s superior in rank, she commands him to stand directly in front of her.

Myung-Joo pulls out a tube of sunscreen and begins to dot sunscreen on his face. At his uncomfortable expression, she assures him that she’s not trying out make-up on him, she’s just having contact with him. He asks, doesn’t she know the “kids” (other soldiers) are watching?

There is a slight tension between them as they both know there are issues surrounding their relationship that need to be resolved. Yet, for a few minutes, they try not to worry about any problems. They banter back and forth and a pouting Myung-Joo lets her hand drop from his face. The camera angle switches to their hands, and we see Dae-Young gently stroke the top of her hand with his thumb.

These moments are what I love about Sergeant Dae-Young throughout Descendants of the Sun. His hard reserve covers the tender love he has only for Myung-Joo. His steadiness is what makes him desirable. He doesn’t need to show his love in big ways. Despite their arguments, Myung-Joo knows how unwavering Dae-Young’s love and commitment to her is.

A flustered Myung-Joo scoffs as she looks around and replies, “The kids are watching.”

The sunlight streams down as Dae-Young pulls her closer to him and says quietly “I can win against anyone.” They look into each other’s eyes for a moment before Myung-Joo closes her eyes and leans forward for a kiss. Dae-Young searches her face deeply.

As he goes to kiss her, we see Myung-Joo’s feet lift in anticipation, like Cinderella awaiting her Prince Charming. Instead of a glass slipper, Myung-Joo’s dirt-covered army boots rub against each other.

It is the perfect moment…until Yoo Si-Jin’s (code name: Big Boss) voice breaks over the radio requesting help with a stuck car. Myung-Joo and Dae-Young stare at each other for moment and a trace of a smile is visible on each of their faces.

“I can’t win against this guy,” Dae-Young tells her. On the radio he asks his friend, “Why do you always get stuck on the road?”

Have you seen Descendants of the Sun? Do you have any other favorite moments between Myung-Joo and Dae-Young? Let me know in the comments!

Our romance-themed entertainment site is on a mission to help you find the best period dramas, romance movies, TV shows, and books. Other topics include Jane Austen, Classic Hollywood, TV Couples, Fairy Tales, Romantic Living, Romanticism, and more. We’re damsels not in distress fighting for the all-new optimistic Romantic Revolution. Join us and subscribe. For more information, see our About, Old-Fashioned Romance 101, Modern Romanticism 101, and Romantic Living 101.
Pin this article to read later! And make sure to follow us on Pinterest.
By Natalya Carpenter on June 10th, 2017